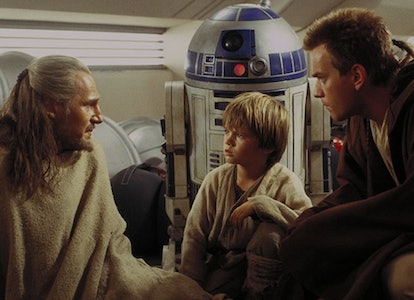 The best Jedi Master is finally coming to Disney+, where he will claim the high ground once again.

With the Obi-Wan Kenobi series’ recent casting announcement revealing the return of both Uncle Owen and Aunt Beru, it already feels like the Tatooine Obi-Wan will return to will look and feel as familiar as it was in the prequels.

However, Owen and Beru might not be the only returning characters we see. One of Anakin Skywalker’s oldest and frankly only friends is in prime position to make an appearance ... someone with a long history of non-canonical Star Wars adventures, and someone with a great reason to stand up against Darth Vader.

Anakin’s Jedi life was a solitary one. Because of the secluded upbringing of the Jedi code forbidding attachments, he never really had a companion beyond Obi-Wan and later Padme. However, before his life was changed by the Jedi, he was nothing but a plucky kid in a bowl cut with a speeder and a group of supportive friends.

Among those friends was Kitster Chanchani Banai, who was with Anakin every step of the way as he was introduced to the strange Jedi visitors and won the Boonta Eve Classic. But when Anakin left, we never saw Kitster again.

At least, not yet. With Kumail Nanjiani’s casting in the series, theories are already swirling that he could pick up where Kitster left off — and while that’s not the most exciting prospect based only on the character’s Phantom Menace debut, it’s really exciting if you know more about how he was treated in the Legends material.

Long story short: Kitster Banai is a very rich character, one who is thematically perfect for what Obi-Wan Kenobi seems to be about. Long story long? Well, keep reading.

Kitster’s post Phantom Menace life was detailed in 2003 book Tatooine Ghost, which followed Leia Organa Solo and Han Solo on a mission bringing them back to Tatooine. The journey ends up revealing more about Anakin’s past and allowing Leia to confront her Sith father’s humanity.

Leia and Han are sent to Tattooine to secure a painting containing a secret communication device. There, they run into Kitster at an art auction, where he’s selling a holocube image of his old friend Ani. At a key moment, he saves the artwork for Leia and Han and escapes, only to get captured by Tusken raiders.

While in captivity, he learns of a Tusken myth involving the “Tattooine ghost,” a strange being who slaughtered an entire tribe of Tuskens with a “glowing sword.” After being rescued by Han and Leia, he learns that being was actually Anakin, and chooses to believe he regretted his actions.

“The boy I knew would have been sorry for what he had done,” he says, “and even ten years away would not have changed that.”

While this story took place after the events of the original trilogy, it could easily be transposed to occur during Obi-Wan Kenobi. Fresh after the Clone Wars, Kitster believed his Jedi pal died in the Order 66 genocide. A show set in that era could explore his grief over what Anakin has become, matched only by the grief shared with Obi-Wan.

Given the return to Tatooine, and the focus on people Anakin left behind, Kitster’s return is an obvious and exciting choice. He’s unexplored enough that there’s narrative freedom, but there’s also the name recognition for the die-hard prequel fans. Plus, the Tattooine Ghost story could fill in more about Anakin’s legacy on Tattooine. With any luck, Nanjiani will be the actor tasked with bringing this extremely underrated character back to life.

Then again, seeing as Kitster doesn’t appear in original trilogy canon, and the promise of Darth Vader returning to the proceedings ... yeah, let’s not think too hard about that yet.

Obi-Wan Kenobi is expected to debut on Disney+ in 2022.