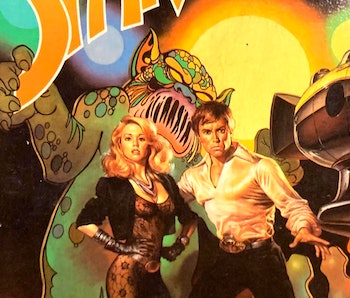 Bad science fiction is often born of the best intentions. And sometimes the most spectacular failures in sci-fi are the most entertaining, even if the creation of the thing was super-painful for everyone involved.

The most controversial sci-fi show of all time is also the most unintentionally hilarious. You might think you know about influential, underrated, or interesting ‘70s sci-fi, but you haven’t seen anything until you check out this series, streaming free online right now — a series that contains the single most bizarre moment in retro sci-fi history.

Welcome to The Starlost

The Starlost was a short-lived Canadian science fiction series about a far-future generation ship containing remnants of the human race, including many humans who don’t even know they live in on a spaceship.

The first episode focuses on a man who lives in a quasi-Amish community realizing he’s actually living on a giant spaceship. It’s weird! It’s unconvincing! It’s utterly hilarious. And, probably the only “bad” sci-fi show you’ll ever watch where you won’t even need to make jokes to make fun of it. It does that all on its own.

The 1973 series ran for 16 episodes, making it slightly more robust than your average prestige TV season today, and double the length of a Disney+ show. For some, especially the creators, this was 16 episodes too long. Like the 1978 Battlestar Galactica that would follow it and the contemporaneous series Space: 1999, The Starlost was, in some ways, poised to take its place alongside the renaissance of filmed science fiction in the 1970s. Star Trek had been canceled in 1969, but the ‘70s was brimming with potential, and what Trek had proven, despite its cancelation, was that the audience for weekly TV sci-fi full of big ideas was out there.

But The Starlost didn’t go so well.

Why is The Starlost controversial?

The “creator” of The Starlost was famous (or infamous) science fiction writer Harlan Ellison. By 1973, Ellison was a well-known firebrand in the SFF lit community but was already making a bigger reputation as the kind of writer who would frequently get into huge dust-ups with people who ran sci-fi TV shows.

Although Ellison was an early proponent of Star Trek in the 1960s, by the time his Trek episode — “City on the Edge of Forever” — finally aired, his relationship with Trek creator Gene Roddenberry was ruined. Ellison claimed Roddenberry unfairly changed his script, and the details of that literally fill entire books.

The point is, by the time Ellison was tapped to create and write The Starlost, his reputation for demanding 100 percent creative control over sci-fi shows with questionable production values was well-known. By the ‘80s, his plagiarism threat to James Cameron resulted in a very prominent mention of his name at the end of The Terminator.

What makes The Starlost unique among Ellison’s famous dust-ups is that he kind of lost. In losing, The Starlost became a bizarre mish-mash of conflicting themes and sci-fi concepts. The budget was also laughably low, and most episodes have the feeling of looking more like a ‘70s Doctor Who fan film than a real science fiction show.

The science advisor on The Starlost was author Ben Bova. Like Ellison, Bova became disillusioned with the project, but he managed to write a great novel about the experience. In 1975, Bova published The Starcrossed, a novel that told the story of a futuristic — and holographic — TV show, hiring a cantankerous writer to adapt Romeo and Juliet into a state-of-the-art series, but on a razor-thin budget.

In The Starcrossed, Bova creates a fictional future version of Harlan Ellison named “Ron Gabriel,” who insults people by calling them “humpers.” If you ever wanted to understand Harlan Ellison’s whole deal through the lens of a comedic sci-fi novel, you can do no better than The Starcrossed. The 1975 Pyramid Books paperback even had a cover art where one of the characters looks like Harlan Ellison.

How to watch The Starlost for free!

Here’s the question: knowing that you’re getting into a super-cheesy, troubled, and bizarre science fiction show, should you watch The Starlost?

The answer is a qualified “yes.”

Watching The Starlost is an undeniable trainwreck, but it’s an interesting one. The studio was so dissatisfied with Ellison that they changed his scripts to the point where he took his name off the final product. This is why the creator of the series was Cordwainer Bird, a nom de plume of Ellison’s that was an homage to SF writer Cordwainer Smith.

The difference between the ‘70s Buck and Battlestar and The Starlost is somewhat bizarre. While those two shows still look relatively good by the standards of the day, The Starlost doesn’t. But, the basic writing of The Starlost is more creative than either of those Glen Larson shows. Had Ellison been given the budget and the creative control this show could have been like The Prisoner in space. If only...

Luckily, you can make up your own mind. The Starlost is streaming for free via Roku. If you watch TV with a Roku device, there is an entire channel just devoted to The Starlost, which you can check out here. And, yes, creating a Roku account is totally free.

The show is also mostly free on YouTube, so you can start your “Voyage of Discovery” below... if you dare!