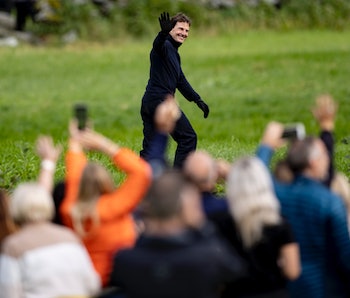 So here's what Tom Cruise is doing in quarantine, besides seeing Tenet in theaters. As production begins on the (untitled) seventh Mission: Impossible movie, footage of a death-defying motorcycle stunt went online.

Even though it's just 40 seconds, it's probably the best new movie you'll see all year.

What Happened? — On Sunday, Norwegian news site NRK captured footage of the first day of principal photography for the seventh Mission: Impossible movie. That day included a jaw-dropping stunt in which Tom Cruise rode a motorcycle off Helsetkopen — a huge mountain in Norway measured 1,246 m.a.s.l., or meters above sea level — where Cruise activates a parachute to land safely. The stunt was performed not once, not twice, but four times.

Footage of the stunt went viral on Twitter, where it was shared by Twitter user Tom Cody (@Tom_Cody_SP). "Tom Cruise is an absolute madman #MI7," Cody tweeted.

A similar stunt was filmed in Oxfordshire in the UK a few weeks ago. While just as intimidating, that it's shot lower to the ground and not on a huge mountain means it is possible it was filmed for VFX purposes to "Frankenstein" necessary shots together.

You can watch NRK's video below.

Cruise Control — Reported by NRK, a group of some 200 people gathered to watch Cruise perform the stunt. After performing the stunt for the third time, Cruise came down and spoke to the crowd. The actor stood at a distance of twenty meters in observance of Covid-19 measures.

While there was an enthusiastic crowd who glimpsed the making of a major Hollywood movie, the team behind Mission: Impossible hasn't been welcome everywhere. Earlier this summer, production caught the ire of Polish locals when the filmmakers allegedly sought to blow up a historic bridge dating back to 1912 that had survived World War II. Use of the bridge ceased in 2016, where it closed indefinitely awaiting maintenance.

In an interview with Empire, director Christopher McQuarrie said there "was never a plan to blow up a 111-year-old protected monument." The director chalked up the controversy as being stirred by an unidentified individual who wanted a job on the set "for which we felt they were not adequately qualified. When this individual's demands were not met, they retaliated."

The Inverse Analysis — It's difficult to gauge the plot of Mission: Impossible based on one stunt. But the video itself shows Cruise, age 58, and his fondness for performing stunts even a daredevil in their 20s would think twice about.

The Mission: Impossible film franchise has long been about the world being in some imminent threat that only Tom Cruise, as agent Ethan Hunt, can prevent. And he can only do it by climbing mile-high skyscrapers or strapping himself to a plane or hanging off a helicopter. In a February 2020 interview with Collider, McQuarrie said the next sequel will contain three "obscene" stunts "that make the helicopter chase [in Mission: Impossible — Fallout] look like tinker toys."

The plot of Mission: Impossible 7 is unknown. But the film will feature most of the franchise's staple actors back to reprise their roles, as well as introduce newcomers Hayley Atwell (Agent Carter), Pom Klementieff (Guardians of the Galaxy Vol. 2), and Shea Whigham (Joker) in undisclosed roles.

In May, Deadline reported that Tom Cruise is currently collaborating with SpaceX and NASA to shoot a movie in space, the first narrative feature film to do so. The film will not be a Mission: Impossible sequel but a different project entirely.

Mission: Impossible 7 will be released in theaters on November 19, 2021.

More like this
Culture
Jan. 12, 2023
Top Gun is remembered for volleyball and jingoism, but it had more on its mind than it gets credit for
By Chrishaun Baker
Entertainment
Jan. 25, 2023
Polite Society breaks the mold for the coming-of-age movie
By Andy Crump
Entertainment
Jan. 24, 2023
RRR’s Oscars snub proves the award’s most blatant flaw
By Dais Johnston
LEARN SOMETHING NEW EVERY DAY.
Related Tags
Share: