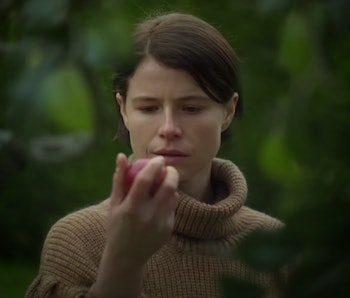 Alex Garland is no stranger to telling scary stories. The acclaimed writer and director has always found ways to inject horror into his films, which has made sci-fi titles like Annihilation, Sunshine, and 28 Days Later stand out from the crowd. However, with his newest film, the Jessie Buckley-led Men, Garland seems to be embracing the horror genre more fully than he ever has before.

The first teaser for Men sold it as a contained and eerie psychological thriller, one less concerned with exploring dense sci-fi concepts and more with diving headfirst into one woman’s psyche. The latest trailer for Men accomplishes a similar feat while also making it clear that Garland’s newest project might just be his creepiest.

The Trailer — The second trailer for Men packs quite the punch. Clocking in at two-and-a-half-minutes, the trailer reveals more about the film’s plot and its central heroine, Harper (Jessie Buckley), who decides to stay at a quiet house in the English countryside in the wake of her ex-husband’s apparent suicide.

However, the trailer quickly takes a dark and surreal turn when it begins to show Buckley’s Harper interacting with the various men that live in a nearby town, all of whom are played by Rory Kinnear. The latter casting choice not only makes Men’s scope feel even more suffocatingly contained, but also suggests there’s something strange going on with all the “men” that Harper has found herself surrounded by.

Haunted, Tormented, or Both? Like any good trailer, Men’s latest teaser doesn’t reveal too much about the film’s plot or central mystery. Instead, it packs itself to the brim with disturbing imagery and tense moments, including several unnerving shots of Kinnear’s adult face resting on a child’s body.

These moments make Men out to be Garland’s smallest and scariest film. The director’s decision to pay homage to Sam Raimi’s Evil Dead by assuming the POV of the film’s mysterious malevolent force as it rushes toward Buckley’s Harper at one point only makes his contained, pared-down horror ambitions with Men that much clearer.

The Inverse Analysis — Coming off the release of Ex Machina, Annihilation, and Devs, all of which received widespread acclaim, Alex Garland is on a hot streak. Whether Men will continue that run remains to be seen, but the film’s trailers don’t suggest that it will be any less effective of a thriller than Garland’s previous outings.

Now all fans of Garland’s work have to do is wait until Men hits theaters this May to find out exactly what it is that’s tormenting — or, as Kinnear’s priest says in the film’s latest trailer — haunting Jessie Buckley’s Harper.