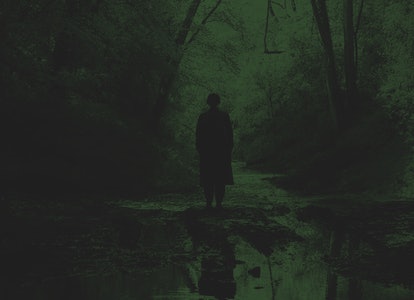 Alex Garland's Men is a harrowing, maddeningly surreal journey into the English countryside that will give viewers plenty to argue about after the credits roll. Drawing on home invasion, fairy tale, and folk horror tropes, Men features Jessie Buckley as a newly widowed woman seeking refuge at a pastoral rental estate, only to find herself surrounded by the same terrors that lurked back in the city. Or perhaps it’s all one terror with a thousand slightly different faces.

Over the course of its economical 100-minute runtime, Men goes from a seemingly simple drama about grief, to a showcase of everyday masculine aggression against women, to something far more eldritch and ancient. If Annihilation is a treatise on depression, trauma, and the drive to self-destruct, then Men is about the way grief peppers you with reminders of the person you lost (for better or worse) and how you eventually just learn to get on with it.

Garland and his go-to cinematographer Rob Hardy create a crisp, verdant world in the English countryside for Harper (Buckley) to escape into, which is a great contrast to the hazy memories that unfold over the course of the film of a pivotal argument with her late husband James (Paapa Essiedu) in their London flat. The home she’s rented is a Zillow dream, with a piano, a claw foot tub, ancient wood doors and beams, a huge kitchen, and lots of windows overlooking the estate. The main hallways and the master bath pulse with red paint. The nearby woods are inviting and lush, and Harper explores with a sensual joy, reveling in the rain and the echoes of a huge railway tunnel… until she notices something at the other end of the tunnel. It’s as if she dared to enjoy life for just a second and forget her grief, and her guilt took shape. Jessie Buckley is, of course, exquisite, and watching her in nearly every frame is a delight.

Harper gets lost in the woods — Men is not exactly subtle — only to find that the shape has taken the form of a naked man standing near the ruins of a house on the estate. He seems to have the same face as her landlord Geoffrey. When she sees the naked man, slightly greenish and slow-moving yet terrifying nonetheless, she calls the police, and one of the officers also looks alarmingly like Geoffrey. Other than the flashbacks to James, the only masculine face onscreen during Men is that of Buckley’s co-star Rory Kinnear, whether transformed with wigs and makeup or digital effects, as is the case with a particularly bratty little boy who curses at Harper when she refuses to play with him.

Each man Harper encounters reminds Harper of her place in the world as a woman in ways that will be immediately familiar to many viewers. These interactions may seem small and seemingly harmless, but they add up. Some encounters feel malevolent, such as the vicar who zeroes in on Harper’s guilt, but the sheer uncanniness of seeing that same male face everywhere makes you doubt your senses — especially as flashbacks reveal the terror and pain of Harper’s last moments together with James.

Is it possible Harper is simply an unreliable narrator, seeing danger where none lurks? Or is her gut correct, and it’s the world around her that’s gone mad? Harper’s best friend, played by Gayle Rankin, appears via FaceTime as an anchor to reality, cheering her on and reminding her of who she is and her place in the world, but Wi-Fi in the country is pretty glitchy — yet another connection to her past life, lost in the ether.

A pivotal scene in an empty church holds Men’s Rosetta Stone: an altar with a Green Man on one side and a Sheela-Na-Gig on another. These ancient, mysterious figures recall Men’s place in folk horror, with Harper as the outsider from town who disrupts the old ways. While the Sheela-Na-Gig has been reclaimed in some circles as a symbol of female empowerment, it’s not entirely clear what the figure and its pulled-open vulva meant throughout history: a celebration or a warning, a fecund mother or a gleeful crone. Either way, it’s meant to discomfit, much like Harper herself, a single, childless woman with short-cropped hair who refuses to cater to the seemingly endless parade of men and their needs and desires. (Garland says these figures were the original inspiration for Men, penning over dozen scripts throughout his career before finally landing on this one.)

We don’t have to wait too much longer for Men to reach its climax, which features some of the most staggeringly weird and gruesome imagery I’ve seen on screen since, well, the organic nightmares in Garland’s previous film, Annihilation. This sequence will either make or break this movie for many viewers. I was left confused and deeply (though, I must admit, gleefully) disturbed.

Men is audacious, terrifying, and annoyingly oblique. From its declarative title to the brilliant use of Rory Kinnear in a kaleidoscopic array of performances, Men wants you to think about gender and trauma, but the movie itself is a funhouse mirror reflecting back your own biases and experiences.

While there’s value to be had in those discussions, and didacticism doesn’t make for particularly great art, it’s also hugely tiring to tease out bits and pieces of evidence that this movie doesn’t actually think women might need a good slap in the mouth once in a while. I don’t believe that’s the message of the movie, or indeed that there is a message per se, but it is very tiring to take everything on good faith these days, especially as a female horror fan. Or, you know, just as a woman living in a world of Men.

Men premieres May 20 in theaters.