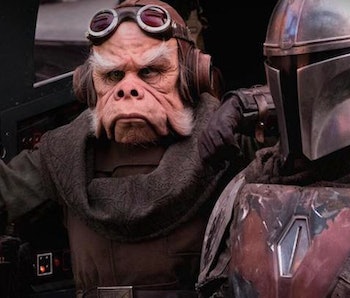 An off-the-wall fan theory about who froze Han Solo in carbonite might suddenly gain some traction. According to a new synopsis for the upcoming Star Wars book From a Certain Point of View: The Empire Strikes Back , anyone holding out hope for more details about the alien race known as Ugnaughts has reason to celebrate. One story in the anthology will focus on the Ugnaught clans on Cloud City. For Ugnaught lovers the potential here is obvious, but I'll spell it out: Kuiil (Nick Nolte) from The Mandalorian could make an appearance. If he does, somebody is going to say "I have spoken," and hopefully the thing they are talking about is carbon freeze. Speculation ahead. Spoilers ahead for The Mandalorian Season 1.

Quick refresher: In The Mandalorian Season 1, Kuill brought the Ugnaughts back in a big way. Previously only background characters, Kuill was arguably Mando's most loyal partner. Between fixing Mando's ship, teaching him how to ride Blurrgs, and making the ultimate sacrifice to defend Baby Yoda, Kuill is, without question, the purest and noble character we've seen so far in The Mandalorian.

But what did he do before that? The Mandalorian happens six years after Return of the Jedi, which makes it about seven years after The Empire Strikes Back. This connection has led to the fan theory that Kuill was on Cloud City during the events of The Empire Strikes Back and helped to freeze Han in carbonite. (Some of Kuill's dialogue seems to support this idea, too. You can read the full fan theory here.)

Now, one of the new stories in From a Certain Point of View will explore what the Ugnaught clans were doing during Han, Leia and Chewie's visit to Cloud City. Here's the official synopsis:

Martha Wells reveals the world of the Ugnaught clans who dwell in the depths of Cloud City.

Wells is the author of the popular Murderbot series book series and got her start writing Godzilla fanfic. This doesn't prove she will make an explicit link between Kuill and the events on Cloud City, but because she began her career writing fanfic, you could argue that she thinks like a fan, and this has her own theories about what Ugnaughts were up to on Cloud City.

From the larger perspective of Star Wars canon, the bigger crime seems to be doing an Ugnaught story post-2019 and not mentioning Kuill. Even if he's not in the story — like not physically living on Cloud City — it would feel strange if he wasn't mentioned. Including Kuill in some way, shape, or form seems inevitable. You wouldn't write a story about Gungans and not mention Jar Jar Binks.

Then again, there's an entire TV show called The Mandalorian which has somehow managed to avoid mentioning the most famous Mandalorian-armor-wearer of all time, Boba Fett. So, a story about Ugnaught clans that don't mention Kuill is certainly possible, even if it's not very likely.

Mark my words, come November, everyone will be talking about how Kuill felt terrible after freezing Han Solo in carbonite, and this one story will make it forever part of Empire canon, and change the way we feel about The Mandalorian, too.