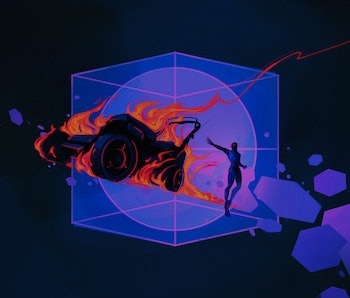 Movie adaptations exist on a spectrum. On one end, you have the extremely faithful (Zack Snyder’s 300). On the other end, the loosely-inspired-by (Stanley Kubrick’s The Shining). And then, there’s The Lawnmower Man.

Released on March 6, 1992, The Lawnmower Man borrows its name — and not much else — from a Stephen King short story. While King’s story is about a satyr with a penchant for human sacrifice, the movie from director Brett Leonard is about the potential powers (and dangers) of virtual reality to advance the human mind.

“The Stephen King short story has nothing to do with virtual reality,” Leonard told Inverse for a definitive oral history of The Lawnmower Man. “The actual short story is in the movie — even the dialogue with the police — but everything else was created from whole cloth.”

In response, King sued the studio to get his name removed from all marketing materials, but that’s just the tip of the virtual iceberg when it comes to The Lawnmower Man’s many flaws (and several strengths). 30 years later, let’s take a closer look.

What’s wrong with The Lawnmower Man?

Any discussion of this movie has to start with its portrayal of virtual reality. Brett Leonard was inspired to write the script after meeting with Jaron Lanier, a noted futurist who co-created the concept of VR. Unsurprisingly, not everyone got the idea.

“When the producers got the script they were somewhat confused because they didn’t understand what virtual reality was,” Leonard said. “So [co-writer] Gimel [Everett] and I made a 20-minute educational video and showed real virtual reality technology to educate them on how that would work in the film.”

Combined with actual input from NASA, this gives The Lawnmower Man an impressive edge as the first movie to tackle the concept of virtual reality. Unfortunately, it also means that a lot of the movie looks like this:

Believe it or not, these graphics are arguably the best part of The Lawnmower Man in a so-bad-it’s-good kind of way, but it’s hard to argue that this movie is anything but monstrous to behold.

“In the late ‘80s, computer animation didn’t have a look,” Mark Malberg, who worked on the film’s special effects, told Inverse. “That era, in general, was kind of like the wild wild west of computer animation.”

The Lawnmower Man might have been a cinematic trailblazer, but (thankfully) the rest of the industry didn’t follow suit.

Beyond the questionable CGI, there’s also the issue of the movie’s portrayal of its main character Jobe (Jeff Fahey), who seems to have some sort of undiagnosed intellectual disability. The Lawnmower Man’s portrayal of Jobe fails by most metrics, from suggesting that his character is less-than until a scientist figures out how to “fix him” to his ultimate transformation into a murderous supervillain. Overall, it’s not great, even by early ‘90s standards.

What’s right with The Lawnmower Man?

For some fans, the answer might be simple: the graphics. Yes, they’re ridiculous, but they’re also kind of fun to watch. It’s like looking at what people thought the future would look like back in the 1950s.

Beyond that, The Lawnmower Man also earned the respect of some impressive storytellers. According to Leonard, Stephen King actually called him to say he liked the movie — but still planned to sue the studio for using his name.

“Brett. Very cool movie. My kids actually really liked it. Very clever. I think it’s incredible. Of course, it has very little to do with my short story and they’re saying it’s from the mind of Stephen King so I’m probably gonna sue these bastards. But I want you to know, I’m not gonna sue you and I think you did a great job and I’ll be positive about the movie.”

Who else also loves The Lawnmower Man? None other than The Terminator and Aliens director James Cameron.

But despite that praise, the overall consensus is that The Lawnmower Man is... not great. The movie has a 35 percent critics score on Rotten Tomatoes (and a 31 percent audience score). So take that (and everything else mentioned above) into consideration before you consider revisiting this historic-if-somewhat-unwatchable movie.

More like this
Entertainment
Jan. 30, 2023
The Boogeyman Trailer Delivers a New Take on Stephen King's Monster Under the Bed
By Dais Johnston
Culture
Jan. 25, 2023
David Cronenberg made the best Stephen King adaptation you probably haven’t seen
By Jon O'Brien
Culture
Jan. 19, 2023
28 Days Later is still the greatest zombie story of all time — and it’s not even close
By Jake Kleinman
LEARN SOMETHING NEW EVERY DAY.
Related Tags
Share: