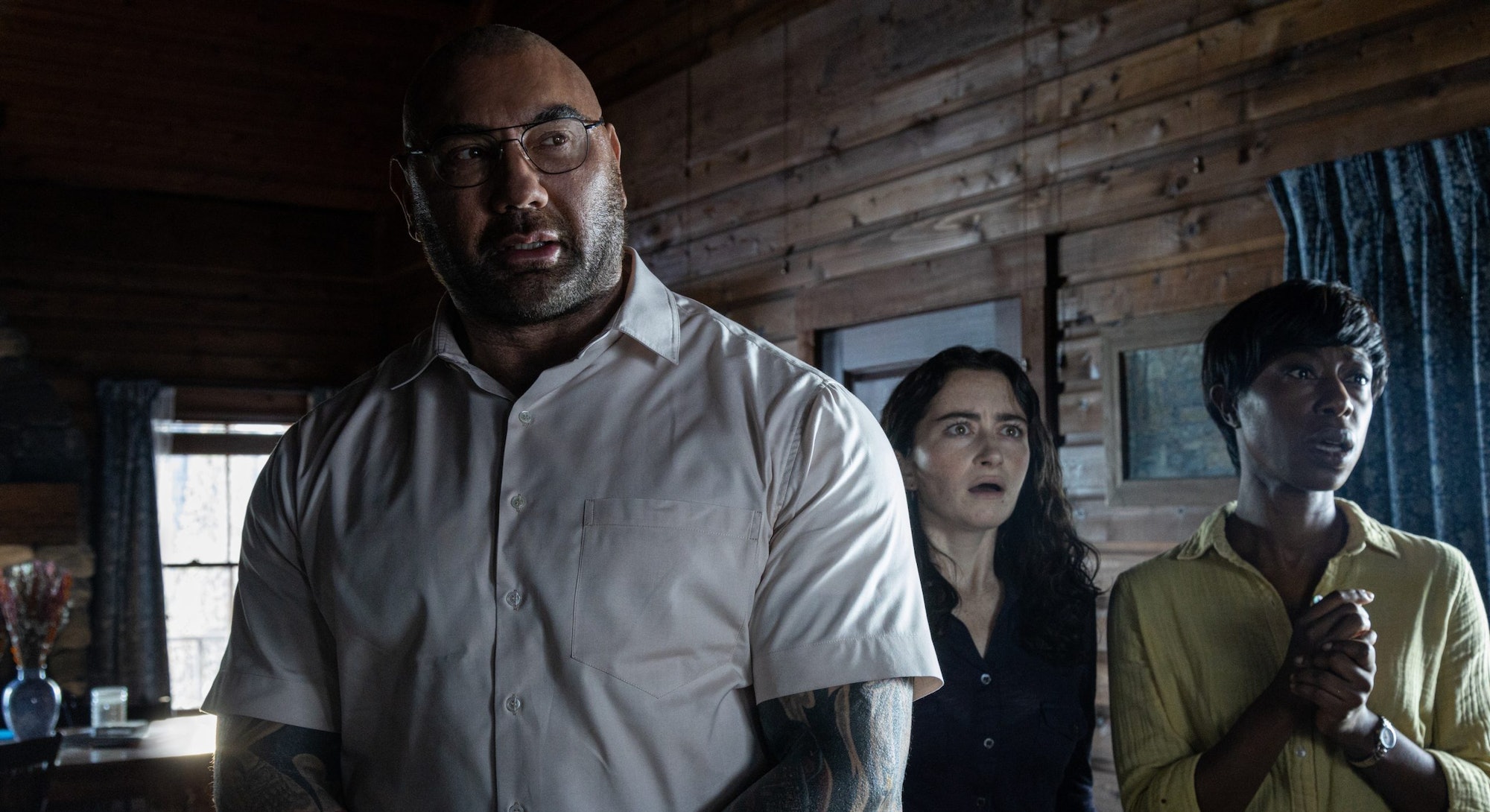 The world is about to meet Paul Tremblay.

Already a best-selling horror author, Tremblay’s path to Hollywood has been slow, if not particularly steady. In 2015, his novel, Head Full of Ghosts, was optioned by Robert Downey Jr., but production hit a wall when the world shut down in March 2020. Three years later, an entirely different adaptation is thrusting Tremblay into the spotlight in the form of M. Night Shyamalan’s next mind-bending thriller: Knock at the Cabin, based on the 2018 novel The Cabin at the End of the World.

“I think every writer dreams of when a movie is made and what it would feel like,” Tremblay tells Inverse. “You build it up in your head and it just becomes this day-to-day thing. But, at the same time, there are these cool moments where you pinch yourself, and the first moment for me was talking to M. Night Shyamalan on the phone. It was pretty wild.”

In a separate interview promoting an immersive trailer for Knock at the Cabin at the Consumer Electronics Show, Shyamalan tells Inverse how he wound up directing the movie.

“The book came to me as a producing thing and had a screenplay attached with some young filmmakers. I gave them my advice about how to make the movie and remembered feeling how amazing the setup of the story was. I was very excited by it,” the director says. “Six months later, the people that owned the book and movie came back to me and said, ‘Hey, do you want it?” I thought about what I would do with the movie and how I would change the story, and said, you know what, I’ll put aside the movie that I was going to write and work on this.”

Two years later, the film, which tells the story of a vacationing family taken hostage by an apocalyptic cult, is about to arrive in theaters.

“It all happened so quickly,” Shyamalan adds, “It’s the fastest script I’ve ever written.”

“The first two acts are probably very similar to the book. The third act is quite different.”

As for how the original story changed from book to movie, both Shyamalan and Tremblay are tight-lipped for now, but the novelist did offer one clue as to how his original plot may have changed.

“For people who read the book, there will be plenty of surprises,” he says. “The first two acts are probably very similar to the book. The third act is quite different.”

In a long-ranging interview with Inverse, Tremblay talks about his unforgettable experience visiting the set of Knock at the Cabin, his future Hollywood plans, and how he reacted to not getting a mention in the movie’s official trailer.

As the author of a bestselling novel, how do you feel about not being the screenwriter on a film that’s based on your book?

I never asked to write the screenplay, especially when the book was initially optioned. Not that I have a name now, but I had a lesser name then and can understand why a studio wouldn’t want a novelist coming in and being too precious over their work. So I’ve been more than happy to see other screenwriters working on it. When the bigger studios get involved, it's not unusual to have the screenplay pass between a whole bunch of different hands. And to their credit, the film’s screenwriters Steve Desmond and Michael Sherman landed a spot on The Black List, which I’ve come to learn is a fairly big deal in helping unproduced screenplays get discovered.

Are you upset about being left out of the trailer?

I don’t want to talk too much about that. Honestly, I'm very thankful that my fans are so excited to see my name up there. I posted a cheeky response to one of the movie posters that came out. I think I tweeted, hey, the poster looks great but feels like there's something missing, which was partly tongue in cheek, partly like my fans were seeing in the trailers and in the posters, the screenwriters' names appear for a flash. But not the original book. So I mean, obviously, I did notice a lot of people online are arguing. It kind of stresses me out, but frankly, I'm very appreciative of the fans and obviously very appreciative that the movie is being made.

“Obviously, I did notice a lot of people online are arguing.”

Did you have any involvement in the making of the film?

Not contractually, but FilmNation kept me in the loop, sent me the screenplay, and let me send notes.

How did M. Night Shyamalan get involved?

I think the original director team was trying to thread a needle with some sort of time crunch where they were supposed to start working on another movie, and it didn’t work out. It was dragging on like five-six years.

Then, we heard Night was interested as a producer and possibly even to direct, but had to finish another movie first. After he came on board, it came together very quickly. There was an announcement about Dave Bautista being attached. And in November 2021, I got a call with Night.

“I think every writer dreams of when a movie is made and what it would feel like. You build it up in your head and it just becomes this day-to-day thing. But, at the same time, there are these cool moments where you pinch yourself, and the first moment for me talking to M. Night Shyamalan on the phone. It was pretty wild.

He talked about how much he loved the book. I told him I was a big fan of his work. And, in very broad strokes, he told me what the major changes were and what he was going to do. It was our first time meeting and I really appreciated him being so upfront. It was a very nice conversation.

After that phone call, did he periodically check in with you?

Yes. During December through March, I would get a text from him occasionally asking questions like, Where did you get the idea for the weapons that the invaders carry? I would send him things I had looked at. One of the actors had a question about her character. There were little things like that. It was pretty cool to be asked for input that way. They started pre-production in March and filming in April, and I got to visit the set in mid-May for two days, which was a lot of fun.

Where was the set located?

It was about a 30-minute drive from downtown, like in a suburb of Philly.

“It was like my brain was being fooled. It felt like late afternoon but outside the window was just a concrete warehouse.”

Did you have a chair on the set?

Haha, no, but everyone was super friendly and generous with their time, including Night.

They built two cabins. For exterior shots, there was a cabin in the woods somewhere just over the Pennsylvania–New Jersey line. And for the interior shots, they built a second cabin inside a warehouse. It was so stunningly beautiful that it hurt my New England heart. I was like, Man, so they’re just gonna tear this down. Can I take this cabin and put it on a lake somewhere in New England?

It was explained to me that in the warehouse, they can better control the lighting instead of having to wait around for sunset or for dusk. I cannot tell you how realistic it was to be inside the cabin with lighting as if it were late afternoon. It was like my brain was being fooled. It felt like late afternoon but outside the window was just a concrete warehouse.

What did you do during filming?

I got to see a bunch of scenes and often sat in the same room that Night was watching on the screen as the actors were acting. I also got to meet with the prop guys. On the second day, I spent quite a bit of time talking with the actors in between sets. It was definitely a career highlight.

Did he send you dailies for input?

The two days I was on set I was invited to go upstairs with the editors and some of the producers to watch dailies that were coming in. And after I came back from the set visit, I was sent a link to read the screenplay.

What was your impression of the screenplay? Is it close to the book?

I'm not going to give away anything as the movie is coming out in just a few weeks, but it's an extremely well-written screenplay; super intense. There's a lot of sameness and there are differences. For people who read the book, there will be plenty of surprises. The first two acts are very similar. The third act is quite different.

Are you going to the premiere?

Yes, my wife and I are very excited. Much of the discussion in the house is what am I going to wear? We Googled it and with most of these premieres, no one's wearing a tuxedo except for the Oscars. So I think I'm just going to put on a nice suit.

Did Stephen King launch your career?

Head Full of Ghosts is really the book that broke me. That was a book that Stephen King tweeted: that scared the living hell out of him, and I'm not easy to scare. It really gave that book a second, third, fourth, fifth life. But he’s been an influence for a long time.

Head Full of Ghosts got picked up by Robert Downey Jr.’s production company. Whatever happened with that production?

“So it is still under option with those two sets of producers, but a new financer is now involved.”

What’s next? Would you consider doing a scripted drama for any of the streaming networks?

The Pallbearers Club could be a limited series, could be a movie, I suppose. As for what’s next, I know things are gonna be a lot different once the movie is out. I just don't know how different it's going to be. So I'm going to try to enjoy the experience. The Hollywood stuff is great. I would love to be more involved — like attempt an adaptation of something I've written or doing some behind-the-scenes work — but first and foremost I am a novelist. That's where I feel most comfortable, where I have more control of the story. Plus I still have my day job as a high school math teacher.

Knock at the Cabin hits theaters on February 3.