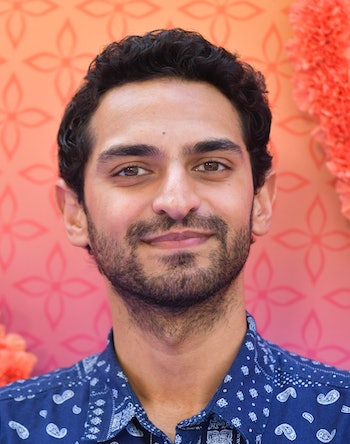 "I'd never been first on a call sheet before."

Five years on, actor Karan Soni looks back fondly on his starring role in Paul Feig's cult-hit sci-fi spoof, Other Space. Originally aired on Yahoo, the series is now available in its entirety on the sci-fi streaming service Dust.

Outer Space is addictively funny and instantly endearing in a way later, more hyped shows like Avenue 5 and Space Force were not. It's also criminally underseen. "It's always a little bit like disheartening to see something like that, which has much more marketing muscle," Soni tells Inverse.

The actor has appeared in Safety Not Guaranteed, Deadpool and its sequel, Amazon's Betas, and currently stars alongside Daniel Radcliffe and Geraldine Viswanathan in TBS's comedy anthology series Miracle Workers. Soni recently made his directorial debut with "Star Time," the second episode of Season 4 of HBO's anthology series Room 104, created by Mark and Jay Duplass.

Very nerdy. I had no friends at all until sophomore, junior year of high school. Then I ended up doing a play, which was a comedy. I didn't know what I was doing, but it got a bunch of laughs, and then the mean kids started being really nice to me. So that became my group of friends.

The worst part was — I'm not proud of it — is I bullied the people I used to be friends with, because I was so insecure. I remember taking their homework assignments and flushing them down the toilet.

I just turned 30 like two years ago, and I realized so many of my decisions then were made out of fear. There's no sense of who you really are, what your morals are, what you care about.

So I only listened to Bollywood music, and each movie has a mix of genres in it, ao it's basically an album of a movie. There's a very famous Bollywood filmmaker named Karan Johar, who's famous for over-the-top, very masala movies. I listened to that music over and over.

I went to my first concert when I came to LA to go to college. It was Lupe Fiasco. So random.

Converse. I had the dark blue ones and two or three other colors. I went through a long phase where I would mismatch them. I also had the while ones that I customized with a marker — I wrote my name on them, which is so lame.

One is the trailer for Harry Potter and the Goblet of Fire, which was my favorite Harry Potter book. You had to download it on QuickTime and then watch it. I remember downloading the lowest resolution: it was so small on the screen and it still took like four or five hours.

As it was downloading, you could watch a little bit more of the trailer. I remember the carriage and the flying horses coming in, then the boat from the other school coming out of the water, and thinking "this is the coolest thing I've ever seen."

What's a truth you believed about love when you were 15?

Indian parents can be quite controlling and demanding. And mine, for whatever reason, we're just always very sort of open and liberal. They never forced religion on me and my sister. Anytime we did anything, they were very supportive.

Then I saw other kids not telling their parents the truth about what they were doing or feeling. I realized I never had to do that with them, and it must be because they really loved me. That's the biggest thing, and it's stayed true, so far! I still feel like they are kind and we have a good relationship.

Which high-school teacher did you like the most and why?

My drama teacher. I went to an international school in Delhi and signed up for drama because my grades in science were really bad, and I was very much a wallflower. She was the one who put me in the play, and it gave me a social life. Once I started doing these plays, that became like my thing, I would be in a play every few months. She was the gatekeeper of all of that.

Safety Not Guaranteed was a big one for many reasons. I had gotten an agent before my junior year of college and I'd been going on commercial auditions, blind parts on TV shows, and nothing was happening for the first year and a half. I'd gotten one job that ended up being a really bad experience. So I was about to graduate college and I thought, maybe I don't want to do this.

I ended up getting Safety Not Guaranteed and missed my college graduation to go to Seattle for a month. It was one of the best creative experiences I've ever had. I was working with an amazing cast, Aubrey Plaza, Jake Johnson — Mark Duplass is an amazing director. Everyone was so collaborative. They treated me like an equal and my ideas mattered. It was such a good experience to feel like you're making something special, you're excited to come to work every day, and the material is good. Then the movie went to Sundance and did really well there.

Mark Duplass hired me to direct on Room 104 because of the relationship we developed on that movie in 2011. A lot of things kind of spiraled from that experience.

About a year after I went to Sundance for Safety Not Guaranteed, I was working at a restaurant and auditioning. I ended up getting a TV series for Amazon called Beta. It was the year before Transparent, and I was a series regular, which meant that I was able to quit my restaurant job and make a living full-time from acting.

So we did 13 episodes. There was all this buzz about how Amazon had all this money. Netflix was renewing shows before they even premiered. I remember thinking that I had job security for another year, and of course, it got canceled. At the time, it felt like this was my one chance, and it won't happen again. Then a few months later, I got Other Space.

It was a good lesson — trying to hold onto any expectation will just end up hurting you at the end. It's better to go with the flow. It's easy to say that in retrospect, but you have to remind yourself that you don't know what other things are now available.

What's your can't miss prediction for 2030 and why?

I hope that we remember that we're all one race, and we don't need to compete with each other in any field. With the pandemic, everything feels awful and isolated. I hope something wakes people up to the fact that we're all in this together.

My hope with Hollywood is, as a minority, we still depend on the people who have power to give us opportunities. There's great people like Paul [Feig] out there — I'm sure when he saw my audition for Other Space, there was some conversation of like, well, he doesn't have enough credits. But Paul has power, so he gets to make that decision. My hope is that in 2030, more people of color, minorities and women have the power to make those decisions.

So I mentioned Harry Potter. I'm on a TV show with Daniel Radcliffe right now, Miracle Workers. We've actually become friends, and I've asked him every question possible about making the movies. He's so open about all that stuff. I think my 15-year-old self would say, "Directing?! Who cares about that! You're doing a show with him!

I had to audition for that show, and I'd been in the business for eight, nine years by then, but I was so nervous. Then he ended up being the nicest, best guy. We started texting after the table read. At the time, he was watching a lot of The Bachelor, and so was I, so we were texting a lot about The Bachelor.

During the first season, I would rewatch the [Harry Potter] movies on weekends, and then on Monday ask stuff like "How did you film the quidditch in Chamber of Secrets?" He also showed me some of the group texts between him, Emma Watson, and Rupert and I was like, what is happening?

We just filmed our second season and watched all of Bachelor in Paradise in Prague.