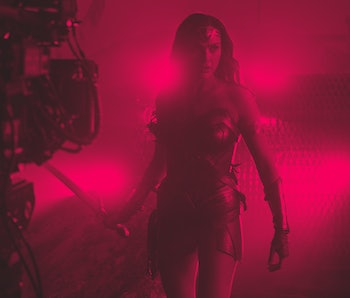 It's only January, but November 2020 will be the third anniversary of Justice League, the DC crossover superhero movie that failed to light the world on fire like its Avenger rivals over at Marvel, and director Zack Snyder is already reliving the past. All this time later, Zack Snyder is still releasing material and images from his director's cut. And one of them contains a newer look at a hero that never suited up in the movie.

On Tuesday, Snyder shared on his Vero account two behind the scenes photos from the making of Justice League. The first is of Chinese actor Ryan Zheng, seen in a S.T.A.R. Labs lab coat. Snyder included with the photo a caption that reads, "Ryan Choi, Director of nanotechnology Star labs."

The second picture, shared an hour later, is of Jeremy Irons on a workbench inspecting Batman's bladed gauntlets in an abandoned WayneTech aerospace hangar. (Because all billionaires have abandoned hangars they never use.) The scene's full context is unknown, however, it's a safe assumption that the scene may have centered on Alfred tuning up Batman's tactical gear introduced specifically in the events of Justice League.

Alfred's cool and all, but that first photo is really important because it's a brand new look at Zheng as Ryan Choi, a character omitted from Snyder's version of Justice League. In the comics, Ryan Choi is an accomplished scientist who suits up as the size-shifting superhero "The Atom," taking over from Ray Palmer. Zheng's involvement in the film was previously confirmed by Snyder in another post back in September 2018, but this photo is a new look at Zheng's Ryan Choi never seen before.

Years after Zheng was to debut the character on the big screen, Ryan Choi finally made it to live-action played by Osric Chau in the recent television special "Crisis on Infinite Earths," a crossover of The CW's family of DC TV shows. Chau will reprise the role in a new season of Legends of Tomorrow.

It's all just wood for the fire to keep burning until Warner Bros. ups and decides to release the "Snyder Cut" once and for all.