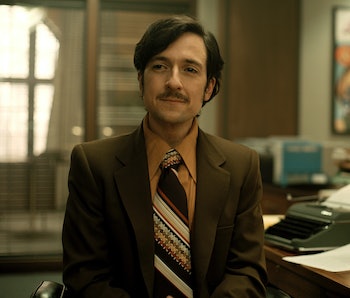 Josh Brener has a soft spot for video games.

This feels appropriate, given the actor’s previous work as Nelson “Big Bead” Bighetti on HBO’s Silicon Valley and his current performance as a young C.W. Longbottom in Apple TV+’s video game-themed comedy series, Mythic Quest. Both projects share a reverence for the tech/gaming industry, and for Brener, these roles are a natural fit. And, by all accounts, a dream come true.

“Oh, man, he'd be so excited,” Brener tells Inverse, speculating about how his teenage self would react to the direction his career has taken. “Let's see ... it would have been a little after GoldenEye, so I probably would be playing Mario Kart and NFL Blitz at that time. I think he would have just been really pleased with how far video games have come.”

It feels a bit apropos that Brener would show up in Mythic Quest. The series, which was created by Rob McElhenney, Charlie Day, and Megan Ganz, shares its name with the fictional video game the program is about. He may not be a recurring character here, but his contribution to the program continues the heart-felt trend of adding past context to present conflicts. The series began this practice with the season 1 episode, “A Dark Quiet Death.”

The show continues that practice with the sixth episode of its second season, titled “Back Story” (which premiered to the streamer on Friday). Here, the series takes a trip back to 1972 to flesh out sci-fi scribe C.W. Longbottom’s (F. Murray Abraham) origin story. This young C.W. (Brener), known then as Carl, is shown champing at the bit to make a name for himself in the science fiction world by working as a junior copywriter at a sci-fi magazine.

And what Brener accomplishes here, aside from inhabiting a bevy of Abraham’s behavioral traits, is he brings a flawed texture to the quirky, ego-centric man we’ve gotten to know over the past two seasons. For audiences expecting to see more “Big Head” on screen, Brener’s take on the character is surprisingly touching.

Brener sat down with Inverse for a little nostalgic conversation about the actor’s formative years, from his high school devotion to The Dave Matthews Band and that one time he dated twin sisters when he was 15 to getting his foot “ever so slightly in the door” with J.J. Abrams.

Loud would be the primary adjective. I was the third of three boys desperate for attention. And I got it with extreme volume. That led to getting in trouble in class but doing better in theater.

What was your favorite band when you were 15-years-old?

I don't even have to think about it. The Dave Matthews Band. No question. I went and saw them multiple times at The Cynthia Woods Mitchell Pavilion in Woodlands, Texas.

Well, my wife will be very displeased to hear this. But I have to admit, it went on far past high school. It was a striped t-shirt with a long sleeve shirt underneath it. So like a white long sleeve white shirt with like a blue striped or a black striped t-shirt over the top of it. I basically dressed like Ness from Earthbound, the video game.

I know we had AOL and we had like a family AOL account that was the first initial of all of our names in the family. And then I came up with my own screen name because I couldn't have mom and dad read my IMs.

This, unfortunately, is not a joke. My first screen name was Canstanza69. “Costanza” was spelled wrong.

What is the truth about love you believed when you were 15-years-old?

15 is like, what, sophomore year of high school? I’ve got to really think about this one.

I don't know if this is the right thing, but at that age, there were two people in my life subsequent one after the other. They were both twins. And I don't know if that says something about love or about just weird teenage boy stuff. But I dated two twins early on in my high school career. And, you know, I don't know what to make of that.

What high school teacher did you like the most and why?

That's easy. So, it's a combination of two people. Larry Dachslager and Gail Silver. They were middle school into high school, like, theater teacher mentor types. And, you know, introduced me to musicals and old movies and the Marx Brothers and, you know, all that kind of stuff that has stayed with me. since those days.

I think it was a job that I didn't get. I auditioned many, many times for this short-lived show called Undercovers, which was a J.J. Abrams show. And I got to audition for J.J. like five or six different times. I went through the whole process and ended up getting second place to Ben Schwartz, which was truly an honor. He's a brilliant, brilliant man. But based on getting close on that, I was able to, at least in my own mind, know that maybe I was okay. Like, maybe I'd be okay. Maybe, I could someday get a job. And I think that at least put a foot ever so slightly in the door.

Everything since that audition.

What is your can't miss prediction for the year 2030 and why?

Elon Musk uploads his consciousness into some sort of global A.I. that makes everyday decisions for us from moment to moment.

Oh, man, he'd be so excited. Let's see ... it would have been a little after GoldenEye, so I probably would be playing Mario Kart and NFL Blitz at that time. I think he would have just been really pleased with how far video games have come.