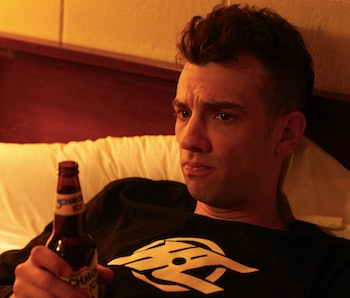 Jay Baruchel is best known for showing up in Judd Apatow comedies and voicing the main character in the How to Train Your Dragon movies, but he’s always been a scary movie fan at heart.

In case his brief stint in Are You Afraid of the Dark didn’t make that clear, Baruchel’s second film behind the camera should confirm his horror roots. With Random Acts of Violence, the Canada-born actor adds his own mark to the genre, all while setting his sights on the United States as the source of his own worst scares.

“I was trying to trigger in the audience the sensation of being a Canadian crossing that southern border.”

Woven into the story of a group of Canadians venturing south are obvious digs at the exploitation of serial killers and culture of violence in America, which Baruchel tells Inverse is no coincidence. As Random Acts of Violence continues, the violence seems to increase the further away the characters get from Canada

“I was trying to trigger in the audience the sensation of being a Canadian crossing that southern border,” he says. “You immediately feel sharper elbows and sharper shoulders. You immediately know that they play by different rules.”

Baruchel knew he wanted to make movies at nine years old, and at 12, his mother encouraged him to pursue acting full-time. A hot-headed teenager, when he first started working in California, his mom would often remind him to keep cool.

“She would always say, ‘Be careful. Be careful. Be careful. You’re not in Canada, they have guns down there.’” Baruchel recalls, “And like guns is one fucking piece, one tentacle I think but there is something in the very origin myth of that particular country. I think when Bowie put out that song ‘I’m Afraid of Americans’, he said it all.”

When Baruchel was younger, he and his writing partner Jesse Chabot would make horror movies with friends on the weekends. Each year, they’d cue up at Montreal’s big genre festival, Fantasia where his cinematographer, Karim Hussain, was a co-founder.

Nearly 10 years after the initial project fell into their laps, they’ve finally come full circle on their first collaborative horror project with “Random Acts of Violence.”

“Film finance is byzantine and exasperating and any movie that isn’t Harry Potter or Star Wars or Marvel is a fucking miracle.”

“It happened now because it took us 8 years to finally find people that saw the thing we saw the way that we saw it.” said Baruchel. “Film finance is byzantine and exasperating and any movie that isn’t Harry Potter or Star Wars or Marvel is a fucking miracle that probably had to die a bunch of deaths before it finally happened and I can’t stress that enough.”

Adapted from the graphic novel of the same name by Justin Gray and Jimmy Palmiotti, Random Acts of Violence follows successful comic series creator, Todd, as he struggles with writer’s block. His top-rated series, “Slasherman”, needs an ending and he finds himself unable to come up with anything that can do the story justice. Looking for inspiration, he decides to roadtrip through the old stomping grounds of the I-90 serial killer who inspired his comic. While traveling with his crew — an ensemble that includes Baruchel as his publisher, Ezra — they are followed by a series of murders that mimic the violent and gory killings of the comic series.

This meta film can be enjoyed both as a face value slasher film and as commentary on the responsibility of creators and the potential for toxic fandom. Random Acts of Violence serves as a warning for artists to be cautious of what they choose to create and how their art can be interpreted by their audience.

Baruchel and Chabot also made the decision to strip away some of the heavier language presented in the original comic.

“It’s a part of the whole overall process of taking the comic book and knowing that this document, this script we’re creating that hopefully becomes a movie, has to ultimately be its own organism,” he says. “The comic book and the script are the movie’s parents.”

Random Acts of Violence is not for the faint of heart. The first violent act is extremely stabby, frantic even. For Baruchel, it was important that his horror choreography didn’t look like fight “moves”. He didn’t want anything to happen in the film that wouldn’t actually happen in real life.

“We definitely had a ceiling,” he says, “but our ceiling wasn’t a ceiling of violence or brutality, it was a ceiling of reality.”

Random Acts of Violence is streaming now on Amazon.