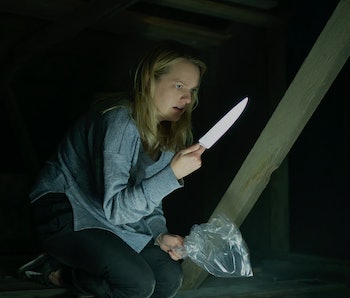 To get the gist of Leigh Whannell's newest horror movie, The Invisible Man, and why it's so different and so much better than previous versions of the same story, the chorus to the perfectly titled 1998 pop hit "Invisible Man" from the boy band 98 Degrees is an eerily accurate summary. Here it is, the most relevant parts in bold:

I wish you'd look at me that way. Your beautiful eyes lookin' deep into mine. Telling me more than any words could say. But you don't even know I'm alive (Oh hoh hoh). Baby to you, all I am, is the invisible man (Yeah).

Surely 98 Degrees meant for their song, released 22 years ago, to be a harmless anthem of unrequited love. But in the context of The Invisible Man, it illustrates the chilling motivations of its antagonist towards their target of unwanted affections. And in exchanging the crusty archetype of mad scientists for the 21st century's true monsters — manipulative, gaslighting tech billionaires who command lawyers and airtight NDAs — The Invisible Man is a mighty impressive upgrade of H.G. Wells' classic story. It's both an exhibition of Whannell's razor-sharp directing and of Elisabeth Moss at the top of her game.

In theaters February 28, The Invisible Man stars Moss as Cecilia Kass, a woman trapped in an abusive relationship with a tech genius, Adrian Griffin (Oliver Jackson-Cohen). When Cecilia finally makes a daring escape, Adrian kills himself and leaves her a part of his fortune. But when strange occurrences happen around her that turn Cecilia's loved ones against her, she suspects she's not actually free or ever alone.

The Invisible Man again adapts the H.G. Wells novel, this time without the burdens of the "Dark Universe." Because 2017's The Mummy went nowhere, Universal scrapped its plans to rival Marvel Studios with a shared universe and instead opened up its stable of classic monsters to fresh adaptation.

Leigh Whannell, whose underrated thriller Upgrade was basically Venom but smarter, was given reins over the Invisible Man, originally to be played by Johnny Depp. Under the director-driven Blumhouse, Whannell exhibits deft skill in suspense, subverting expectations, and reinventing a tired monster into something new and terrifying like it's never been before.

The Invisible Man is a ghost story and a monster movie in one. Like a supernatural haunted house flick, the Invisible Man's disruption of a peaceful home is both heartbreaking and exhilarating. What drama can spur when the Invisible Man slaps a family friend's young daughter (Storm Reid) with "only" Cecilia in the room? The answer: plenty. But like a monster movie, there is a rising body count and a name to the villain, even if you literally can't see them. You want Cecilia to succeed against her tormentor, not only because she's the good guy and he's the bad guy but because the invisible forces that turn our loved ones to hate us are sometimes the greatest enemies we yearn to overcome.

Buoying The Invisible Man is Moss, in the role of a compelling central protagonist who personifies the bravery of #MeToo and undergoes the ordeals of speaking up and not being believed. Moss, already a recognizable avatar of women's fury in Hulu's The Handmaid's Tale, does the absolute most with unseen enemies — a perfect metaphor for the invisible struggles of victims who speak up against their tormentors. And technically, it can't be easy to throw yourself around a kitchen or cry hysterically at an empty corner of a mental hospital. But Moss makes it look easy.

The movie is all the more impressive because no one alive is rushing to see a damn reboot of the Invisible Man. While the Dark Universe had admirable goals, a whole shared cinematic universe starring the black-and-white movie monsters that are now a child's budget Halloween costume was, and still is, a tough sell. The Invisible Man is working against low expectations, which is why it's a stunner that Whannell exceeds them tenfold.

If you think an unseen villain is just a way to reduce a movie's budget, behold the movie's best scares. I actually had a nightmare partially inspired by the movie not long after my screening. My brain riffed on a scene where Moss tosses a blanket at a chair when she first suspects she's not sleeping alone.

In every major moment, The Invisible Man is a Rube Goldberg machine that constantly reinvents its core idea. After the scare ends, you immediately want to see the next one.

Simply put, The Invisible Man is a powerhouse. It's smart, lean, and impeccably imagined. It is a stunning reinvention of a classic — transforming a familiar monster into something new, going to unforgettable lengths to shock you, and doing so with impressive artistry. For the first time, H.G. Wells' story is told onscreen in a way that's meaningful and entertaining, a monumental feat of suspenseful filmmaking. There's little wrong with this movie save for a "surprise" reveal that is debatably telegraphed. (Even then it opens up a cool possibility for a potential sequel.)

It's probably not what you expected, but The Invisible Man is what it means to see to believe.

The Invisible Man opens in theaters on February 28.