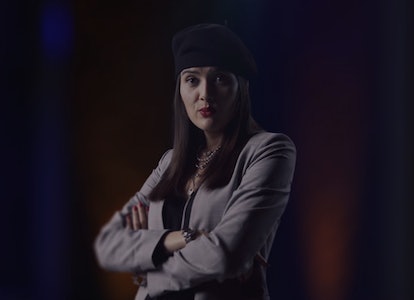 It had all been so normal.

On Shark Tank-esque reality series The Capital Room, investor moguls decide which entrepreneurs to back. A flashy intro sequence, complete with gilded city skylines, leads to mid-shots of the moguls, arms folded and suits pressed. “I turned my parents’ struggling dry cleaning and clothes repair business into a fashion empire,“ brags one. “I started in the mailroom and made my way to the head of the boardroom,” adds another.

Then comes Patti Harrison. “I sued the city because I was accidentally sewn into the pants of the big Charlie Brown at the Thanksgiving Day Parade,” her character says from a power stance, eyes flashing with self-righteous fury. “I made all of my money off the big Charlie Brown, so don’t even come and try and sell me any crap! I don’t want that!”

SCENE STEALERS is a countdown that salutes the unforgettable small-screen characters of the year. Patti Harrison is #10.

As if trying to restore order after this bizarre declaration, the show pivots back — “Business isn’t a game for me, it’s a war,” another mogul affirms – but Harrison regains control, confessing her hatred of “bald boys” and acting out what she’ll do if brought a bad deal. (Netflix’s captions unimaginatively call it grunting, but it’s more like the gurgled cry of a diminutive bridge troll.)

Harrison’s sabotage is soon complete. “I'm not used to being rich,” she explains, oddly earnest. “I can't stop having wine. I can buy the most delicious wine now. I'm scared about how much I need wine. I can't even watch a movie anymore without a big pour of wine... and popcorn."

Who is Patti Harrison?

In delivering such bizarre sentiments, there’s never a reason for Harrison to stress random syllables the way she does, but the end result is always perfectly clunky, riotous in its absurdity. A comedic demolitions expert, Harrison has become a key player on Tim Robinson’s I Think You Should Leave, where her bone-dry wit and confrontational deadpan gradually unhinge every scene she’s in (like the above segment) from reality.

Fans of Tim Robinson’s demented sketch comedy series for Netflix will remember Harrison’s debut in Season 1, as an office worker whose Santa-themed photocopier joke failed to impress colleagues. Her hysterical punchline — “Santa brought it early” — brought Harrison her first taste of social-media memedom, though she’s not stuck around Twitter to enjoy it.

The trans comedian, writer, and actress of color was banned from the platform earlier this year when, in response to Oreos tweeting “Trans people exist,” she impersonated Nilla Wafers — or, more specifically, impersonated pop star Sia doing a social media takeover of the Nabisco brand account — and proceeded to cherry-bomb the discourse, tweeting statements such as “There are only two genders” and “If you are Bisexual, we do not want your business.” (She apologized later, on Jimmy Kimmel Live, telling bisexual people who love Nilla Wafers that she understood “it was probably really painful to read that your favorite cookie hates you.”)

“Her manic, irony-poisoned wit is the closest thing we have to the defining sarcasm of our present zeitgeist”

Harrison doesn’t need Twitter. A bright light of the alt-comedy scene, she’s been landing knock-out punches for years, like a 2018 episode of Bowen Yang and Matt Rogers' podcast Las Culturistas in which she shares her experiences touring as a pop star in Scandinavia and running afoul of a transphobic, rampaging Ellen DeGeneres. Harrison was a vocal opponent of a trans military ban imposed by Donald Trump during his presidency and repeatedly mocked him on late-night TV; one wonders how long it will take for Harrison to land a Ziwe-style variety series, skewering pop culture through her own anarchically surreal lens.

Since gracing I Think You Should Leave, Harrison has played gloriously corrosive receptionist Ruthie on Hulu’s Shrill and headlined her first indie feature, Together Together. That Sundance-hit comedy, from writer-director Nicole Beckwith, paired Harrison with The Office alum Ed Helms to explore the platonic bond between a woman and the older man who hires her as his gestational surrogate. Together Together found Harrison in a more disarmingly earnest mode, leavening the film’s bittersweet drama with sweet-natured comedy, though her acerbic streak remained sizable.

But it’s Harrison’s work on I Think You Should Leave that’s brought her the most acclaim, perhaps because her manic, irony-poisoned wit is the closest thing we have to the defining sarcasm of our present zeitgeist. The comedian anchored another sketch later in the series, in which a driver’s ed class screens a driving safety video starring Harrison. Visibly distracted from the road, Harrison is distraught over the stained, dirty tables she’s driving around, moaning miserably as she attempts to clean them mid-transit. Her job is tables! But what does she do for work, exactly? And how does Freddy Krueger factor in? I Think You Should Leave has legitimate answers to these questions, we promise, but the joy of watching Harrison lies less in reaching a resolution and more in journeying through whatever mania she’s indulging that day.

I Think You Should Leave is streaming now on Netflix.