How Sean Evans reimagined 'Hot Ones' for a pandemic 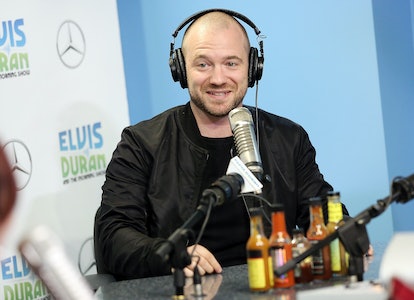 "It sucks, dude," Sean Evans tells Inverse. "It sucks for so many reasons."

During a sit-down Zoom with the host of Hot Ones — the wildly popular YouTube series just kicked off its 14th season — Evans revealed the plethora of ways in which the pandemic (and the industry shutdown that followed) caused him and his crew to completely pivot their production strategy in order to continue bringing his "comfort food show" to the masses.

Hot Ones is an entity that exists mostly in the environment of media days and press junkets. Instead of having their own studio that talent travels to, Sean Evans and the First We Feast crew take their show on the road. This, as the host explains, means, "We're flying to Miami. We're flying to London. We're flying to L.A. We're flying to Chicago. We're flying to Atlanta. We're doing it in New York. We bounce around so much. Setting up travel? This has kind of disrupted that."

With travel nixed from the agenda, the team took things to Zoom which has revealed a new set of issues. "A problem we've had this season," Evans says," we've lined up a guest, have to send them hot sauces, and coordinate all of that."

That all sounds pretty cut-and-dry. But there are so many variables outside of his control. On the other side of that conversation is a whole different location where the guest is in charge of safely eating these wings while shooting their own video.

"We have them shooting themselves and have to get that Quicktime footage from them," Evans explains. "Maybe the data is corrupted. Maybe the sound's messed up and you've got to try to take care of that."

Those potential issues all hang in the balance considering the probability that, at any time, a scheduled celebrity can just skip joining the Zoom interview altogether. Evans says at least one celebrity has called in sick only to post incriminating evidence on their Instagram story.

All that said, Hot Ones has continued to deliver the fun escapism that Sean Evans has strived for, even during these scaled-down episodes. But has anyone taken advantage of this new format to cheat? The short answer: no.

"What's funny is we send out this whole thing which is like a guide for how to do Hot Ones but no one's reading that," Evans laughs. "They get their wing order and they're just laying the bottles out in front of themselves, grab the bottle, and they've just been dumping sauces on the wings."

All one has to do is take a look at the classic Eric Andre episode for proof of how extreme Hot Ones can get. Thankfully, the comedian healed up quite nicely, telling Sean, "My only regret is that I didn't smash a plate over my head." Ours too, to be honest.