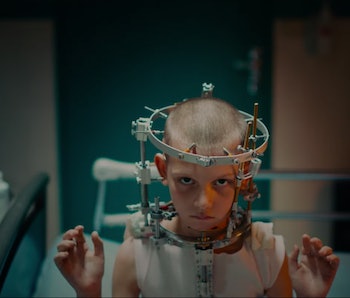 At a certain age, every parent sits their kid down for The Talk: That awkward spiel about the birds, the bees, the flowers, the trees, and all the other metaphors strung together for Jewel Akens’ 1964 song. The goal is to give teens a heads up about imminent hormonal urges and bodily changes. Fair enough.

But it’s 2022 and The Talk is in desperate need of updating because nothing in it accounts for what happens when a serial murdering stripper has congress with a flame-detailed muscle car. Fortunately, there’s Julia Ducournau and her 2021 Palme d'Or winning sophomore feature Titane.

If you’ve heard of Titane, you probably understand the film as “the one where a woman screws an automobile and gets pregnant.” This is a fair summary of its first 30 minutes, where Ducournau budgets the brunt of her jaw-dropping madness. Hit “pause” around that mark and voila: You have a showcase for graphic bloodshed, lurid desire, biologically impossible intercourse, and the value of contraception. Don’t hit “pause.” The strangest thing about Titane isn’t its opening salvo of murder and mutation. It’s everything that comes after, when the film muffles its most transgressive, gruesome elements so we can hear the compassionate heart beating beneath them.

Titane begins as cinematographer Ruben Impens, working with Ducournau again after shooting her equally controversial 2016 debut Raw, guides his camera along the piping and serpentine belt of a car driven by a man (Bertrand Bonello) whose daughter, Alexia (Adèle Guigue) aggravates him to distraction and an accident. Her skull cracks. Doctors install a titanium plate in her noggin. Cut to adult Alexia, now played by Agathe Rousselle, gyrating and gesticulating at a motor show. It pays the bills because slaying overeager men in parking lots doesn’t.

When the car Alexia modeled on earlier in the evening turns its engine on its own, she makes hot, sweaty love with it. Consensus proclaims Titane a horror film via its union between woman and machine, and the squirmy, bloody revulsions that follow. Had Ducournau contented herself by telling Alexia’s story alone, the designation would fit. But Titane isn’t just Alexia’s story. She’s the protagonist; Vincent (Vincent Lindon), a forlorn fire chief going to seed in middle age, is her foil and equally the subject of Ducournau’s interests. He just lacks the torn skin and motor oil.

Titane never stops being Titane; Ducournau neither whitewashes nor neglects the outre cruelty and bald abandon she indulges in act one. But the human body is malleable, and so are narratives. Alexia’s mechanical pregnancy inexorably ushers the film’s plot along even as Vincent carries his own baggage into the picture: Grief over his lost son, Adrien, who disappeared 10 years prior and to whom Alexia bears uncanny resemblance, with a few adjustments. All it takes is a rushed haircut, constricting tape over her chest and her belly, and a self-inflicted broken nose, banal compared to the agonies Ducournau conjures but grisly nonetheless.

Here, Titane suffuses horror with heartache and effectively shifts the movie into drama; Ducournau periodically checks in with Alexia, her abdomen increasingly swollen with a Cadillac’s lovechild, to reemphasize her body horror foundation. It’s not that Titane is more than a horror movie, because being a horror movie is enough. Titane is a great many things in addition to a horror movie, where thoughts about found families, explosive feminine rage, and corporeal agency collide with machismo and fear of waning manhood.

Vincent relates to his body differently than how Alexia relates to hers. There’s a whole other movie about Vincent that could be made sans the participation of Ducournau’s unhinged imagination, steeped in realism and bound by realism’s narrative precepts. Instead, she uses the reality baked into Vincent’s character as a complement to the anti-reality of Alexia’s, which shapes Titane into the rarest modern production: One that’s genuinely unique and can be called “original” without an asterisk. For a film about a car knocking up a woman, Titane is human — and humane — down in its chrome bones.

“Just say ‘yes’ like a normal person!” Vincent barks at “Adrien” in frustration as they sit for their first dinner together in a decade. Alexia has kept mute to maintain her cover; Vincent can’t abide the silence. “Even parrots can say yes!” And then Lindon drops the single most important line in Titane, five words that tie the movie together: “No need to be human.”

He’s talking about parrots as well as his phone, which chirps “yes” back at him when given a lone verbal command, but through him Ducournau engages with transhumanist philosophy: The idea that humans, as we are, require technological enhancement to fully develop as a species.

Titane is a film about how many ways there are to be human more than it is a film about what it means to be human, so Ducournau doesn’t exactly buy into the philosophy itself. But she’s fascinated by the consequences of such proposed enhancements to the human form which, in a word, are ghastly. Humans aren’t perfect. They can’t be. They aren’t supposed to be, either, because perfection isn’t human. Vincent isn’t perfect; he’s brusque and aggressive, and may know more about Adrien’s sad fate than he’s willing to say. Alexia certainly isn’t perfect, for reasons that don’t bear repeating. But they accept each other’s imperfections and find solace from the woes that drive them.

Watch Titane and you’ll learn a powerful lesson about the human condition. You might even feel a newfound connection to your fellow man. But you’ll also see a slaughter at a house party, skin that’s bare as often as clothed, percolating eroticism, and, of course, the shocking, painful transformation of flesh into metal. You simply won’t find a wilder recent release streaming today.

Titane is streaming on Hulu now.

More like this
Entertainment
22 hours ago
In Infinity Pool, Brandon Cronenberg Puts Alexander Skarsgärd Through Hell
By Isaac Feldberg
Culture
2 hours ago
Final Destination 2 Perfected the Art of the Gross-Out Kill
By Jon O'Brien
Culture
Jan. 17, 2023
Wednesday has become a smash hit, but it owes much of its success to its ‘90s predecessor
By Josh Bell
LEARN SOMETHING NEW EVERY DAY.
Related Tags
Share: