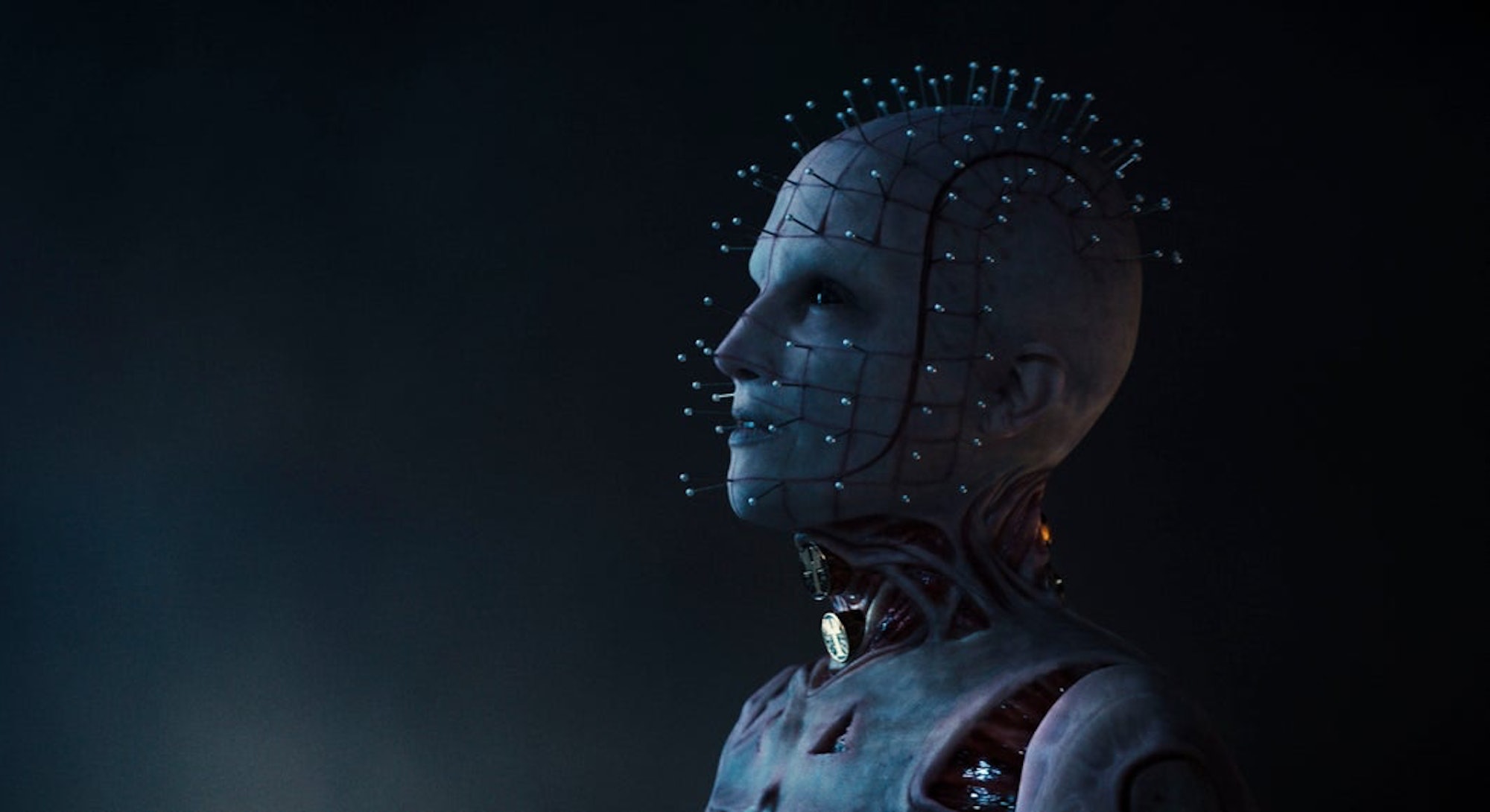 It’s no easy task to reboot a legendary horror franchise like Hellraiser.

First, a reboot has to get out from under the shadow of the excellent first two entries, Hellraiser (1987) and Hellbound: Hellraiser II (1988). Then, it needs to dodge the increasingly convoluted lore of Hellraiser III: Hell on Earth (1992) and Hellraiser IV: Bloodline (1996). After that are the six straight-to-video entries released between 2000 and 2018, which bled what little life was left out of Clive Barker’s creation.

Following all those obstacles, one big question remains: What would a fresh take on Hellraiser even look like?

“I stayed in therapy the whole time we were filming.”

It would be a fool’s errand to simply re-adapt Barker’s novella, The Hellbound Heart, with which the author so memorably made his directorial debut. The same could be said about trying to replicate Doug Bradley’s chilling performance as Pinhead. But given the iconic aesthetic and villain of the original film, straying too far would turn off longtime fans.

Enter director David Bruckner (The Night House) and star Jamie Clayton (Sense8), who give Pinhead a new look in Hellraiser. This installment follows a struggling young addict, Riley (Odessa A’zion), who discovers a mysterious puzzle box with a dark history that unleashes the sadomasochist Cenobites into our dimension while expanding the themes and lore of the franchise in new ways.

Speaking to Inverse, Bruckner and Clayton discussed their collaborative process, walking in the footsteps of Clive Barker, and creating a world we’ll hopefully see more of soon.

Inverse: I’m a big Hellraiser fan, and was thrilled by what you achieved here. This is the first time Clive Barker has been directly involved in the film series since 1996, which feels significant. What kind of insight did he offer?

David Bruckner: Clive is an artist through and through, but he also knows how to speak to artists. He knows what they’re up against, the challenges of filmmaking, the weight of the franchise, and probably has a better sense of what the franchise means to people than anybody. He was a guide, he was a producer, and he was also a fellow creative. He and I had a lot of calls when I was in prep in Serbia. He would process the material and would call me, sometimes at odd hours of the night.

“The fact that Clive was involved was one of the reasons I wanted to be involved.”

We would discuss, as he put it, “our shared obsessions.” He would share lots of artwork and imagery with me, and he fully embraced the idea that you had to both honor the original and do something different. We also really sought to find common ground in the narrative. We’d dig through The Hellbound Heart and look at passages, find corners of what he was after, and parallels between that and the script, and we would illuminate them. He was great to test ideas on, and he knew when to challenge me. It’s so great to have him there. Every conversation with him is a marvel.

Jamie, did you get to talk to Clive about bringing your version of Pinhead to life?

Jamie Clayton: Not yet! But David was able to fill me in on many of their conversations. Just the fact that I knew Clive was involved when the audition came to me was a big deal. Not only was I stepping into these big, beautiful, blood-soaked Doug Bradley shoes, but I wanted to make that it wasn’t just another [sequel]. The fact that Clive was involved was one of the reasons I wanted to be involved.

“There would be a hush that would fall over the crew when she was on set.”

You have a background in make-up art. How did that affect your experience of getting the whole Pinhead regalia down? Was undergoing the prosthetic transformation any easier? How much impact did you have on the design elements?

Clayton: Oh, absolutely zero. My background in make-up artistry is mostly in fashion so I dabbled in prosthetics before I started acting. I did one little short film where I was sort of apprenticing to the make-up assistant. But [on Hellraiser], I did ask a lot of questions. I let the experts do what they do. I just showed up and I let David tell me what to do.

Bruckner: That’s not true! She runs away with it, let me tell you. There would be a hush that would fall over the crew when she was on set. Jamie has such a presence and when she drops into the character you pay attention. People work faster and quieter, and it’ll give you pause because you know the Priest is onset.

Jamie, what was your experience getting into the world of Hellraiser like? Doug Bradley is so iconic, but your performance reminded me so much of the character I imagined when I read the book.

Clayton: Thank you! I wanted to bring something completely new and fresh to the character. I didn’t want anybody to compare my performance to previous performances, which I think is why they wanted to cast a woman. It takes the burden off the audience because it makes the comparison harder.

“We would do one take, and then another that was a complete 180. I would do one super angry and then do it like she was hungry for sex and blood.”

But in terms of preparing for the role, I listen to a lot of music. I make playlists for all my characters. I’ve been through a lot of shit in my life so I really brought all of the torment, the pain, the anguish, the loss, the suffering, the joy, and the sensuality, all through the discussions that I had with David about what the Priest’s intentions were, why she was doing what she was doing at any given moment, why she would ask a question she was asking.

There were nuances that I wanted to bring out, and David really helped me get there in all the conversations we had. We had time on set to play, to do different takes, to try different things. I mean we would do one take, and then another that was a complete 180. I would do one super angry and then do it like she was hungry for sex and blood. So there was time to explore. I stayed in therapy the whole time we were filming. It was dark!

David, I know you’ve worked with your screenwriters, Luke Piotrowski and Ben Collins, a few times before. I’m curious if you had always intended to tell a new story because one of the biggest surprises was that the film gives us new characters.

Bruckner: I have to give it to David Goyer and Luke, and Ben, and Keith Levine, who helped develop it. We were finishing The Night House so I was completely absorbed, and I knew they were working on Hellraiser. Every now and then it would come up and I would just say, “Don’t talk about it to me. I don’t wanna know anything, and also, unless you’re gonna call me to talk about a job, it’s too sacred. I’m not sure I wanna get near it.”

“It is complex, dense material, and you’re playing with sex and violence in really nuanced ways.”

And then when I read what they were up to I knew it was right for me, and it was a direction I thought would really have a future to it because it didn’t seek to replicate everything that you’d seen before. I think it stayed more in the spirit of invention, which to me is very much what Hellraiser is. It wasn’t trying to create a museum piece. Those original few movies, especially the ‘87 Hellraiser, can’t be recreated. I had my take on it and jumped in and had to find a throughline that I could relate to.

We did about nine months of development on it and got the thing sharpened, and I got to bring a lot to it in terms of design and storytelling, but I think from the jump it was just in the DNA of the project to do something that paid homage to the original, but that also acknowledged how big the world Clive created is. It can go in so many different directions.

To jump off that point, Hellraiser is famous — or infamous — for its number of sequels. But I would love to see you both return for more. Are sequels something you’ve discussed?

Bruckner: Yeah, a little bit, actually, but not in a super specific way. Naturally, it does come up. But my heart goes out to anybody who’s made a Hellraiser movie. It’s hard! It is complex, dense material, and you’re playing with sex and violence in really nuanced ways. Thus far we’ve just been trying to see this one through to completion.

Hellraiser premieres on Hulu on October 7, 2022.