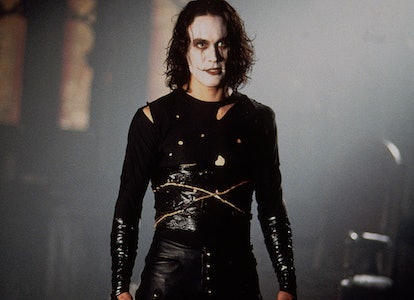 Surprisingly funny and off-setting its darkness with plenty of great jokes and gags. That’s not how this superhero fantasy is generally remembered. The 1994 film, directed by Alex Proyas, is better-known for the tragic production accident that killed its star, Brandon Lee.

It’s hard to separate Lee’s death — caused by defective blank ammunition fired at him during filming — from a movie that is so much about death: coming back from it, avenging it, returning to it. But The Crow, which has influenced every dark superhero movie made since (arguably more so than even Christopher Nolan’s The Dark Knight), is much more than the horrible accident that befell it.

The humor in The Crow comes from all over. There’s Ernie Hudson as Sergeant Darryl Albrecht, a cop who investigates the murders of rock star Eric Draven (Lee) and his fiancée Shelly Webster (Sofia Shinas) on the night before Halloween, referred to as Devil’s Night. When a fellow officer asks Hudson if a body in front of them is the victim, Hudson responds, “No, it’s Amelia Earhart. We found her and you missed it.”

His fellow officers are accustomed to being overwhelmed with fires on Devil’s Night, so they essentially move on, leaving the case unsolved, after comforting a young friend of the couple. A year later, Draven comes back from the dead.

Like Groundhog Day, a very different movie that came out a year earlier, The Crow doesn’t do much in the way of explaining the how’s and why’s of its protagonist’s unnatural predicament. The couple’s young friend, Sarah (Rochelle Davis), only offers some voice-over narration, describing how crows bring people to the afterlife and can sometimes bring them back for true love.

But that’s all the viewer gets. There is no guide for Draven as he claws his way out of the grave, but what he gets (along with the audience) are vivid flashbacks, brightly colored to contrast the near-constant night that cloaks the rest of the movie. Draven’s fiancée was raped and killed by the same gang of men who murdered him. His mission is quickly clear: he’s going to kill them all.

The closest thing Draven has to a partner in this pursuit of vengeance is the bird that guides him to his victims, many of whom are also surprisingly funny. Revenge movies like The Crow work like inverted slasher films: the good guy is the killer, and the hunted are murderers.

It’s crucial that these victims, awful as they are, display at least a few good character traits so as to make their deaths memorable. When one villain, David Patrick Kelly’s T-Bird, dies in bed at Draven’s hands, all he can do is look at the blood pouring out of his wounds and say, “Look what you’ve done to my sheets!” In the midst of this violent scene, it’s a funny moment.

Directing The Crow as only his second movie, Proyas was fascinated by the effect of night on the atmosphere of a film. Prior to The Crow, Proyas had already written the script to what would become his third feature, Dark City, a clever commentary on detective-noir films that takes place in a city with no daylight. But “nobody was going to give money to someone they considered a first-time director to make something that different,” he recalls in an interview with blog Money Into Light. And so he started looking at a script titled The Crow.

Initially, Proyas was not impressed with what he saw, then he started reading the James O’Barr comics it had been adapted from. Inspired by the “clear, clean, and simple” artwork and storytelling in O’Barr’s work, Proyas was convinced he could make a movie in that comic’s world. But only on his own terms.

At first, Proyas wanted to be even more truthful to the comics and shoot the movie entirely in black-and-white. While that idea was rejected by the studio, the movie still uses color in brilliant contrasts. A midnight run across rooftops plays out with bright, gorgeous lighting as if the sun is coming out at night.

Proyas wasn’t familiar with Lee before making The Crow, but the two quickly forged a collaborative partnership. “Brandon was involved with every aspect of the making of the movie,” says Proyas.

The actor especially delighted in contributing script ideas and inspiration for action sequences through his knowledge of Hong Kong cinema. “It was a great creative marriage, more so than any other actor-director relationship I have had,” Proyas says. “I felt he was a storyteller along with myself, collaborating on this movie.”

Amidst its action and clever one-liners, Lee absolutely carries The Crow. He has tremendous chemistry with characters in every scene — even the scene-stealing villains he chops down. Draven’s uncertainty about how and why he’s suddenly alive – not to mention able to instantly heal from bullets – keeps his character surprising. There are few clearly defined rules regarding what exactly Draven can do in his new form. One moment where he suddenly appears hanging from a wall, a big smile painted in white makeup, almost feels like it’s out of Looney Tunes.

Lee’s death came at the very end of production, devastating all involved. Proyas — “pretty much in a haze,” as he recalls it — joined with the rest of the cast to finish the project at the request of Lee’s family. It’s a worthy tribute that the rest of The Crow is as strong as his final performance.

The Crow is now streaming on HBO Max.

More like this
Culture
8.10.2022 11:30 AM
10 years ago, Jeremy Renner ruined the best spy-thriller franchise of the century
By Adrian Manuel
Entertainment
8.4.2022 10:30 AM
Batgirl’s cancellation is bad for all superhero movies — here’s why
By Dais Johnston
Science
8.13.2022 10:30 AM
The best superhero movie on HBO Max resurrects an ancient warrior myth
By Tara Yarlagadda
Related Tags
Share: