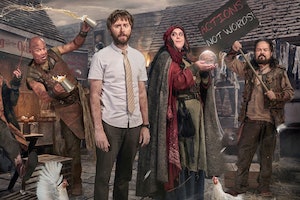 combos to shake up your binges

Sometimes, a movie just isn't enough. Sure, you could binge through a TV show, but then you'd miss out on the complete and relatively compact story a movie allows. So why not try both? HBO Max has equally impressive movie and TV show catalogs, and plenty of options for a sci-fi duology.

A movie followed by a series that builds on its themes not only fills an entire weekend, but it's also like running your own personal bite-size film festival. If you're ready to step up your home viewing game, here are five sci-fi movies and TV shows on HBO Max paired like the finest wine and cheese.

5. Frequently Asked Questions About Time Travel and Inside No 9

Frequently Asked Questions About Time Travel takes everything that annoys you about time-travel movies and subverts them. Following three fanboys as they discover a time portal in a pub bathroom, it uses paradoxes and tropes to tell a story that never ventures outside the bar, but travels everywhere in time.

This is why it pairs brilliantly with the anthology series Inside No 9. Much like FAQ, Inside No 9 restricts each episode to a "number 9," be it house #9, the ninth floor of a hotel, or dressing room #9. Still, it finds a way to poke holes and twist around all sorts of genres and tropes, from Shakespearean comedies to vampire horrors, all with an eerie supernatural twist. Plus, due to its anthology format, it boasts an impressive cast, including one of the stars of FAQ About Time Travel in its pilot episode.

Wonder Woman is the female-led gem in the DC Universe's crown, but its appeal goes beyond the heroine. Wonder Woman's entire persona is centered around Greek Mythology and the Amazons of Themyscira. In the movie, she fights Ares, the god of War, and her mentor is Hippolyta, who features in multiple Greek myths.

The HBO Asia series Halfworlds tells a similar story. In Season 1, an Indonesian street artist named Sarah discovers she is the Chosen One and must defend her world from the Demit, bloodthirsty monsters of Indonesian mythology. The second season moves the narrative to Thailand and explores that culture's rich mythology. There are more Wonder Women than just in Greek mythology, and this series lets them shine.

Zapped is like Time Bandits grown up. While Time Bandits follows a young boy who must work with a ragtag group of misfits as he navigates his way through a strange new world, Zapped is about an office temp worker who gets teleported to a strange world called Munty. The stories are more or less identical, with the biggest change being the target demographic.

Monty Python fans will love this pairing, as Time Bandits was written and directed by Terry Gilliam, and Zapped serves as a millennial love letter to the previous generation of absurdist British comedy. It's a microcosm of how comedy and sci-fi fantasy have evolved over the years.

In Blithe Spirit, a 1945 film directed by iconic filmmaker David Lean, a widower lives happily with his uptight second wife when suddenly the ghost of his first wife appears only to him. In Ghosts, a crowd of specters from different historical eras live in a manor house inherited by a bright-eyed millennial and her husband, but the ghosts are only visible to her. In both, hilarious hijinks ensue.

Where Blithe Spirit excels in its use of a small cast, Ghosts uses the conventions of an ensemble sitcom. After all, a group of ghosts stuck haunting the same house for centuries are basically the same as a bunch of roommates utterly sick of each other's company. Both works use fast-paced dialogue, witty comebacks, and ghostly misunderstandings to craft comedic masterpieces.

HBO's latest hit series is Lovecraft Country, loosely based on the works of horror legend H.P. Lovecraft. It combines mystical tales with a period setting, and deep sense of dread that's incredibly evocative of the horror literature genre. It's difficult to find another adaptation that captures the same tone, but HBO may have produced one just a few years earlier.

Fahrenheit 451 is based on another iconic writer's work, Ray Bradbury. This film instead casts an eye to the future, in a masterwork of dystopia and the economy of information. It's not as strictly supernatural as Lovecraft Country, but it certainly uses the same tools in its toolbox. While both deal with polar opposite settings, they both paint dark pictures and teach tough lessons.