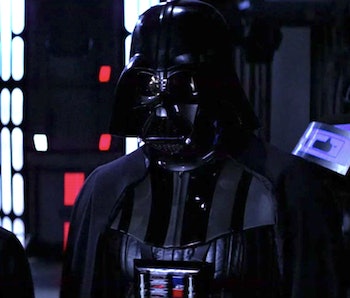 It's time for a rematch. It’s hard to believe we met Obi-Wan Kenobi all the way back in 1977's Star Wars. We later learned that at that point in the decade-spanning story, the Jedi master had given up believing that Darth Vader could ever return to the Light side of the Force. Now, with Hayden Christensen set to reprise his role as Anakin Skywalker in the Obi-Wan Kenobi series, Star Wars fans may finally get an explanation for a cryptic and memorable moment from Return of the Jedi.

Long before they were enemies, Obi-Wan and Anakin were like squabbling brothers. The prequel trilogy expanded on their history, but Revenge of the Sith ended with Obi-Wan leaving his friend behind on Mustafar. By that point, Anakin had already become Vader and there didn’t seem to be any hope that he would leave the Dark side. Obi-Wan’s abandonment felt like the final nail in the coffin of their friendship.

However, when Luke tells Vader that he could still feel the good in him in Return of the Jedi, his response is surprising:

“Obi-Wan once thought as you do,” Vader says, with a hint of sadness.

It’s a line that has befuddled fans for years because there was no evidence that Obi-Wan had tried appealing to Anakin. By all accounts, the Jedi master didn’t go to Mustafar to save Vader from himself at all.

The theory — Redditor u/Irishluck233296 suggests that Obi-Wan, feeling guilty about his actions on Mustafar, will learn that Vader didn’t die on the volcanic planet in the Disney+ series. Obi-Wan will attempt to appeal to his friend before finally moving on for good. This would explain Vader’s line from Return of the Jedi and bring the events of the original trilogy full circle.

Of course, one could interpret Obi-Wan’s trip to Mustafar as an earlier attempt to restore Vader to the good person he was before. But perhaps seeing Vader's rise to power will persuade Obi-Wan to give it another chance. Obi-Wan Kenobi the Disney+ show could fill in the gaps regarding what happened between Revenge of the Sith and A New Hope without impugning on established storylines.

The Disney+ series could provide a lot more backstory for Anakin as well, developing his character in a more detailed way than the original trilogy (and the prequels) ever did. Lucasfilm president Kathleen Kennedy recently confirmed Obi-Wan and Vader will battle again, only this time Obi-Wan could try his damndest to help out his friend instead of leaving him for dead. Obviously, Vader won’t be swayed by his friend’s actions, but Obi-Wan can at least say he tried.

The Inverse Analysis —This theory is plausible considering Christensen’s return to the franchise. Similar to how The Mandalorian is sprinkling in new details without retconning existing canon, Obi-Wan Kenobi could make sense of Vader’s comment to Luke and subtly change the meaning of other scenes too. Either way, the Disney+ series offers fans a chance to revisit one of the most iconic relationships in Star Wars history, and that’s a big deal.

Love Star Wars but don't have Disney+? Click here to learn more about a subscription.