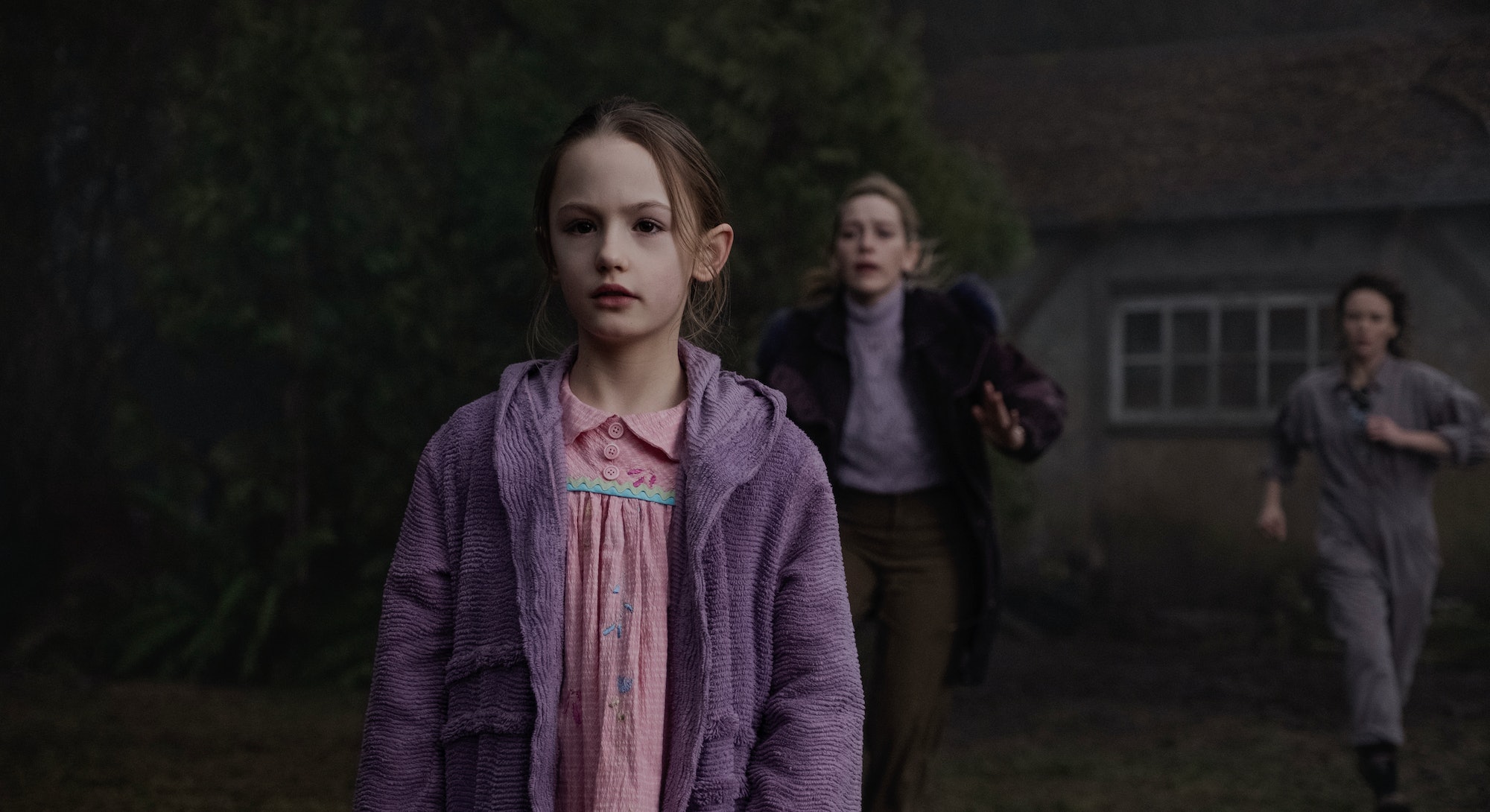 When you think of kids in horror, two images usually come to mind.

One is the image of a screaming child being threatened by whatever horror haunts the story; like Georgie being eaten alive by Pennywise in It. The other is of a kid with an evil grin about to commit horrible acts of violence; like Gage killing his neighbor with a scalpel in Pet Sematary. Netflix's newest scary story, The Haunting of Bly Manor, even begins by addressing this very trope. In Episode 1, Carla Gugino's narrator sets up the story of Bly Manor for a group of wedding guests after the bride-to-be says "ghost stories are worst when there's a kid." Gugino responds by revealing that her story has not one child, but two.

Kids in fiction are an easy allegory for innocence because they are generally understood to be purer than grown-ups. So seeing a child who can't comprehend what's going on around them be corrupted by evil is inherently more tragic than watching the same thing happen to an adult.

Mike Flanagan's adaptation of Henry James' The Turn of the Screw subverts these expectations by making the kids in his latest horror series into the show’s bravest heroes. When we first meet the two children at the center of the story, Miles and Flora, it's clear that something is a little bit off with them. Maybe it's how Flora keeps saying "perfectly splendid" over and over, or that she's weirdly obsessed with keeping her creepy dolls in place. Maybe it's how Miles keeps peeping on his new nanny Dani Clayton (Victoria Pedretti), or even how he freaks out and starts cursing when he's not allowed to have a glass of wine. That Miles and Flora don't act like "regular kids" instantly makes the audience suspect something is wrong with them. And the fact that this is a ghost story only amplifies those suspicions.

Though the answer ends up being supernatural — Miles and Flora are indeed possessed by their uncle's valet and their former nanny — Bly Manor keeps the audience guessing right until the end. For the first handful of episodes, Flanagan wants us to think that Miles and Flora are simply acting out because of the trauma they've been through (dead parents and then a dead nanny). Adult characters constantly say it's normal for the kids to act like they do because of what they've been through because they don't understand what's really going on. In Episode 4, Dani tries to comfort Miles by telling him that she understands what he's going through. "The kids like us, like you, and me, and Flora, we’re special," she says. "We grow up faster than other kids." The kids in Bly Manor face supernatural horrors, but they were already facing real horrors before they ever saw a ghost.

This isn't the first time Flanagan has explored child trauma through the horror genre. After all, Bly Manor’s spiritual predecessor, The Haunting Of Hill House, was all about child trauma and how you can't really escape it after you grow up. Flanagan’s work uses horror tropes and creatures as visual representations of whatever trauma the child protagonist is going through. Hill House has actual ghosts, sure, but the real horror is seeing the Crain kids grow up in a huge, strange house with a father who spends all his time working and a mother who clearly suffers from some kind of mental illness.

The same thing happens in Oculus. Flanagan’s horror film about a woman convinced the murder her brother is convicted of was actually done by a haunted mirror uses its supernatural events to portray the unreliability of memory when affected by trauma. Even Flanagan’s adaptation of Doctor Sleep, which does have a supernatural group of child-eaters, treats Danny Torrance’s psychic powers and interactions with ghosts as a representation of him never being able to face the ghost of his abusive, alcoholic father, as a kid.

Trauma, especially childhood trauma, is something that sticks with you long after you grow up. Flanagan’s movies recognize this, and the filmmaker often focuses on either kids going through some horrific ordeal, or adults who were deeply affected by something that happened in their childhood. The results are movies (and TV shows) that blend the line between fiction and reality, using the tropes and monsters of the horror genre to make us confront the real horrors we go through as kids, and the way those horrors stick with us years later. The ghosts of Flanagan’s stories are real, but they are seldom just ghosts.

Despite their trauma, despite Miles and Flora losing their parents, then seeing their uncle's valet being killed by a ghost in front of them, the siblings don't turn into scared victims just waiting to be rescued by an adult. If anything, they are the real heroes of Bly Manor, the only ones aware of the many ghosts at Bly, and the only ones doing something about it. In the first episode, we see Miles and Flora lock Dani up in a closet. The nanny is obviously upset, but the audience later comes to understand the kids only did this to protect Dani from a ghost that roams the manor's halls after Dani failed to stay in her room after dark. In Episode 2, we see how Miles' increasingly erratic behavior at boarding school caused his expulsion. Though the scenes at first play out like We Need to Talk About Kevin, we later come to see Miles' actions as simply him trying to protect his sister after Flora sent him a drawing of herself alone with the ghosts of the house.

Bly Manor is ultimately a ghost story featuring real ghosts, but it never stops being about the metaphorical ghosts of dead loved ones that haunt us. After the manor's cook, Owen, loses his mother, it is Flora who tries to comfort him. Flora tells Owen how, after her parents died, she felt dead herself, and how that feeling was the only way she knew she was still alive. Even if the adults at Bly Manor want to pretend Miles and Flora are too young or innocent to understand what’s happening, in truth only the kids understand their situation. They’re also the most calm about it — compared to the adults who constantly freak out at the sight of a ghost.

More often than not, child characters in horror movies are used as symbols for the loss of innocence, whether as villains for shock value, or as victims to emphasize the frailty of a child and their emotional wellbeing. Mike Flanagan does something different. The filmmaker has made a career out of portraying emotionally complex children in horror that suffer great loss and trauma, and come out the other end changed. The Haunting of Bly Manor subverts things even further by making Miles and Flora not into victims, but into emotionally complex characters who act as the true heroes of the show.

The Haunting of Bly Manor is streaming now on Netflix.