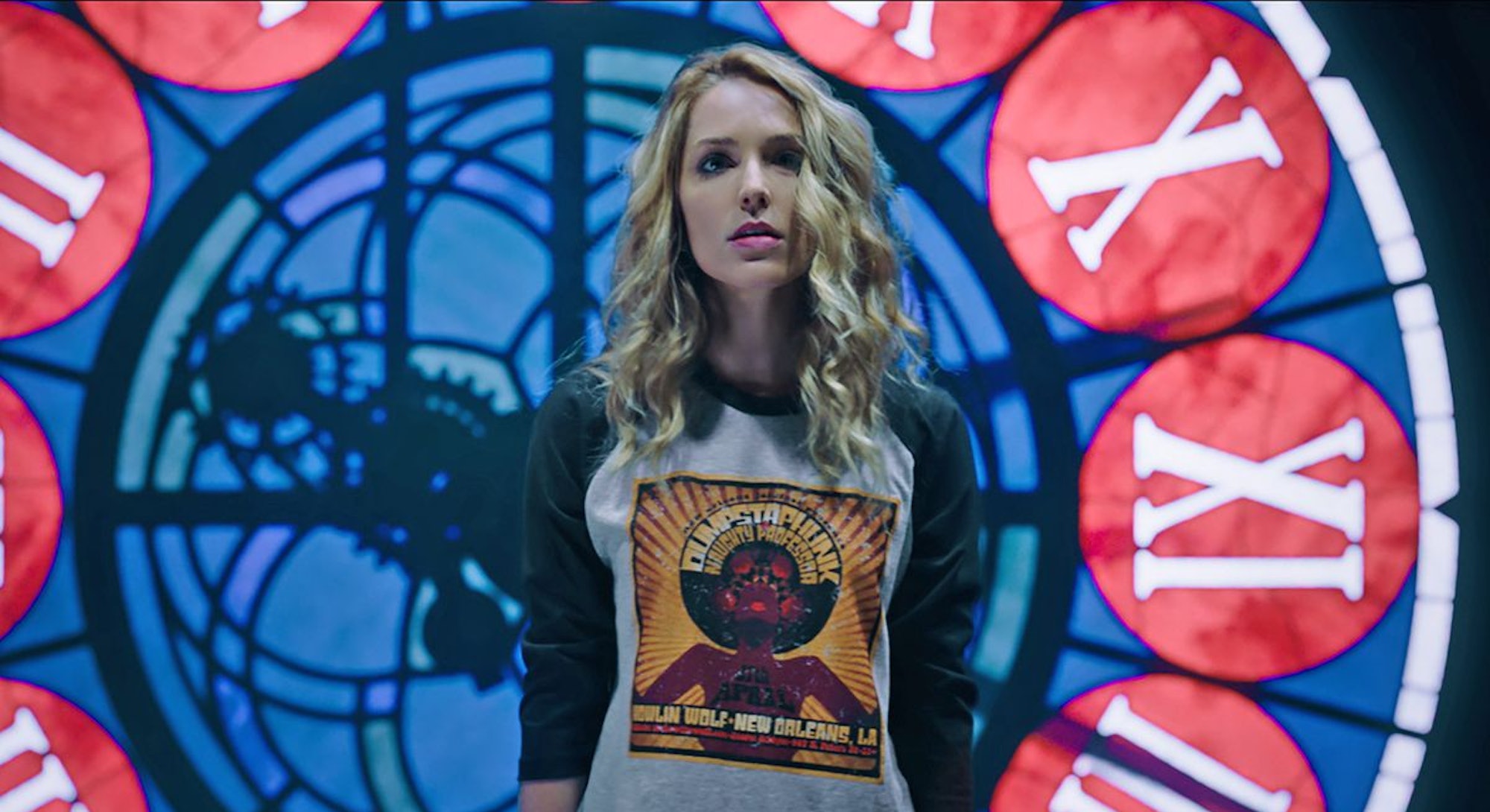 It doesn’t get easier.

That’s the rub. The numb yet exacting pain — the sort that’s undeniable and yet hard to define — never quite subsides. It punctures you in a way that’s never specific, but it’s always consuming. And the pain, however listless it can seem, pluralizes with time. It’s just a part of you now. And you get used to the pain you felt the day before, and the one you’ll feel tomorrow.

And the next day.

And the next day.

It’s hard to express the longing for release and connection that these emotions elicit. You want a jolt, something that’ll make you feel the spark of life again. And unexpectedly, for me, that spark was discovered with Christopher Landon’s 2017 wickedly chipper horror-comedy, Happy Death Day. A self-professed cocktail mix of Groundhog Day and Scream, this irreverent but cunning romp was celebrated for its hot-to-trot energy, its quotable one-liners, and its unsuspectingly sweet emotional sincerity.

But it should also be recognized for all the dynamic ways that its genre-friendly mash-up concept is a metaphor for depression, and how we can gradually work through our individual feelings of guilt and trauma to awaken our best selves. Through its protagonist, Theresa “Tree” Gelbman (Jessica Rothe), Happy Death Day reminds us that even when we can’t quite see a way through the pain, we can still fight through it.

Happy Death Day is an intriguing, inspiring, and, above all else, entertaining way to tackle an idea that’s not especially novel in theory but feels fresh and inspired in this particular form. This movie is one of the very rare times that I have seen the time-travel genre used not merely as a means to explore how we can go into the past or the future to fix humanity or ourselves. But rather, it uses the genre to force our way through our present to make a future for ourselves that we might not even believe is possible. Until, of course, we live through it. Again, then again, and yet again. Spoilers ahead.

Following the jaded main character as a self-absorbed college student, Happy Death Day doesn’t allow us to like Tree’s character at first. She boozes and sleeps her way through life, filling herself with temporary distractions. It’s her birthday, but she’s not looking to celebrate. Another year around the calendar is yet another reminder of her mother’s death, and her own failure to make peace with the ever-consuming loss.

But then, in typical slasher fashion, something sinister happens. She walks home alone late at night and is stalked by a killer wearing the college’s mascot mask to cloak their identity. The killer pulls a knife, and Tree screams for the life that she has taken for granted nearly every day. She’s stabbed, quite brutally, but we don’t see the blood — for she is not dead.

It’s morning again. Like the day before, she wakes up in the bed of a man she doesn’t know named Carter Davis (Israel Broussard). He acts nice, but for all Tree knows, he took advantage of her when she was blackout drunk the night before. She assumes the whole thing was simply one messed-up dream and goes about the day again.

“She becomes more alive with time.”

But even when she avoids the last day’s missteps, she once again finds herself in the grips of a masked killer. She’s stabbed once more, but she’s still not killed. It’s morning again, and she’s once again in the presence of an overbearing Carter. She goes about the day; she’s killed again. She wakes up, and she dies. Over and over, this happens; as a cycle forms, Tree soon gets wiser.

Though she’s not familiar with the time loop narrative template, as she amusingly reveals near the end of the film, Tree knows what it means to wake up and live another aching day. But unlike me, Tree doesn’t brace for doom and gloom. Rather, through her own resourcefulness and her budding friendship with Carter, Tree finds a sense of self and the drive that she once lost. As she tries to find her killer, she becomes more alive with time — even when it gets repeated ad nauseam.

Developing a campy, fizzy-pop style that is spunky but never overly silly, Happy Death Day finds humor and heart in a story about a woman repeatedly dying only to become alive once more. Landon’s feature follows the time-honored (pun intended) tradition of time-loop movies by using the genre to explore the allegorical ways that stagnant characters can be trapped in their dead-end lives and need to rely on their forward-thinking wits to make it another day.

Films like Palm Springs and The One I Love explore the time-loop genre in a way that allows viewers to wrestle with their emotional insecurities when they’re left physically stunted in one place in time. But where those movies can become expectedly cyclical in their exploration of the pain felt by their characters, Happy Death Day is able to find such thematic resonance while also being bouncy, energetic, and fun-loving in equal measure.

Even while the protagonist is left in a perpetual state of agony, both physically and emotionally, we’re not left to bear the same spiraling feelings.

That’s a tricky balancing act that the Blumhouse movie achieves with aplomb, and that’s thanks in large part to Rothe’s wonderfully adept lead performance. Rothe always makes Tree feel wholly realized and completely involving. Her performance is endearing and invigorated. But it also brings to life a woman who can’t properly express the alienation that all too often comes from feeling grief, loss, and/or depression on a day-to-day basis.

“My life is bigger than me and that life is more than that dull ache.”

Perhaps the reason this performance is able to avoid some of the trappings of other grief-related horror comedies of late is that it doesn’t ever let Tree be solely defined by these feelings. Even when they become central to her emotional core, Tree is allowed the opportunity to work through these burdens in messy, unbridled, and refreshingly funny ways. Rothe’s performance showcases a woman who has always had the power to make it through this pain. She just needed the conviction, the motivation, and the purpose — which needed to be unleashed by slaying the parts of her that once refused to die.

It’s not an enviable journey, certainly, but it’s an uplifting one. Tree and I are very dissimilar from one another, but I can see a great deal of the pain I have felt in her searching, ever-communicative eyes. Like all of us, she’s scared of the aching void that greets her every single morning — even when time doesn’t necessarily repeat itself.

While death can consume anyone’s thoughts, Happy Death Day isn’t solely about the struggle of living another day. Rather, it’s about perseverance and endurance, and the film finds a pretty radical way of imparting that message.

Near the halfway point, Happy Death Day quietly astounded me when it revealed that Tree’s pain only pluralizes with each passing death. Never before have I seen a time-loop film that includes the concept of literally living through your past pain. It adds convincing stakes while also creating the metaphor that finally made me feel seen in the genre. As often as time-loop movies have actualized the notion of reliving your flawed existence, I hadn’t seen one that let its character push herself through the burden of her past failures and traumas in such an acute way.

Tree cannot escape her pain with the refresh button that is this time loop. Even when she’s given another chance at life, she must battle it knowing that the pain will continue to fester inside her. Her agony doesn’t disappear, much like I know mine is not going to go away. And it’s not within my power to make it go away. But it’s in my power to find the motivation to push through it anyhow.

And it will never be easy. It kills me, day and day again. But I know, even when I don’t know, that it’s worth it because my life is bigger than me and that life is more than that dull ache.

Happy Death Day is ultimately about making peace with the pain that constantly kills you, and while I’m not at a place where I can find the same closure as Tree, her ever-looped story gives me the strength to know it’s possible. Because sometimes, you need to watch someone die, over and over again, to remember why you live in the first place. It’s never getting easier, but that doesn’t mean it’ll always be harder.