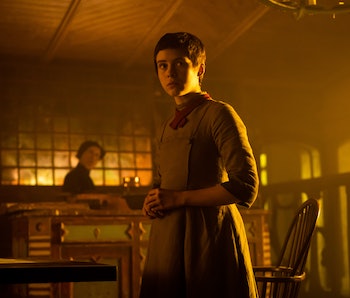 Gretel & Hansel comes from a really good pairing: Take one Grimm fairy tale and pair it with period realism and vaguely Wiccan imagery. But is there an actual horror feast that awaits, or is it all just breadcrumbs leading to fiery doom?

In theaters Friday, Gretel & Hansel is the third movie from director Oz Perkins, who last conjured up a scream in the 2016 Netflix movie I Am the Pretty Thing That Lives in the House. Perkins continues his penchant for the gothic as he takes the familiar story of two siblings, Gretel (rising scream queen Sophia Lillis) and her brother Hansel (Sam Leakey) who wander into the woods, where a witch (Alice Krige) keeps them to fatten them up and eat them. This is a "true" telling of that story, too: No shotguns and crossbows or New York City settings here.

A big difference between the movie and the German story of 1812 is Gretel. Aged about 16, Lillis' Gretel is burdened by maternal responsibility for her young brother. Kicked out by a mother unfit to care for them, she is forced to grow up fast as she's avoiding wolves, literal and metaphorical. In one instance, Gretel avoids comfortable employment under an affluent, predatory lord when he asks her, under heavy breathing, if she's still virginal. Gretel & Hansel is a horror story about just how scary it is to grow up, and the alluring power of self-confidence when you've finally gotten a grip.

Gretel & Hansel is a hell of an idea — grown-up fairy tales! — that is held back by middling execution. An Orion Pictures release, the movie feels as if it's shot from the A24 playbook, offering the same cinematic stylings as The Witch, Hereditary, and Midsommar, minus some of the lasting chill. Like that buzzy batch of movies, Gretel & Hansel is loaded with overcast natural light, unusual camera movement, and unnerving supernatural imagery (hope you like ominous figures in robes). But unlike the best horror movies of today, Gretel & Hansel just never delivers the frights its eerie atmosphere promises.

Despite an effective performance from Krige as the witch, she is disappointingly still the stuff of fairy tales, down to the pointy hat and broom. There were times Krige looked more like my grade school teachers on Halloween than a killer hungering for kids. She has a full-fledged origin story that's meant to evoke sympathy, but sadly... broomsticks.

The two protagonists are also held back by a clumsy script that's unintentionally confusing. The film is meant to evoke the the early 1800s, but their cadence is modern. For example: When Gretel tells Hansel of the witch's never-ending food, she says to him, "Where are all the animals? From where does she draw milk?" in the most casual 2020 voice. It’s not that Gretel & Hansel should be in old German, but the totality of the choices made in the film aren’t the most engaging.

I think of how 2015’s The Witch was, in the best way, utterly incomprehensible without subtitles because of how those actors swallowed the carefully researched dialogue of a bygone era. Details, details, details. That is how you bring audiences into the scary world of period horror. Perhaps to make a more accessible movie, Gretel & Hansel skips over that opportunity.

Straddling the line between earnest and ridiculous, Gretel & Hansel's most admirable quality is in its attempt to make something terrifying out of something that's so not. It doesn't come close, but there's still some heat in the oven. There's a show-stopping moment involving the witch, a sausage, and a long strand of human hair that is perfectly unnerving and illustrative of what the film wants to achieve. It's also a microcosm of how a new genre of horror can totally slay.

The original Grimm Fairy Tales, the lot of them, are all gothic stories that are low-key perverted, gnarly, and violent. (Why does Zack Snyder bother with Batman when he could make something truly about grandma-eating werewolves?) Movies like Gretel & Hansel prove there’s exciting ground to explore in all the old stories.

Ultimately, Gretel & Hansel is like watching an artistic interpretation of a Spirit of Halloween catalog. For the most part, it’s silly — again, witch’s broom — but there are flashes of brilliance that make me wonder why only comic books get all the fun film treatments lately. The movie exists as an archetypical model for what could be an exciting new genre. But with a lack of careful world-building and generally clunky storytelling that fails to deliver screams or live up to its novel atmosphere, Gretel & Hansel is also a cautionary tale of how this winning formula can go wrong.

Stick it back in the oven.

Gretel & Hansel is in theaters on January 31.

This article was originally published on Jan. 30, 2020