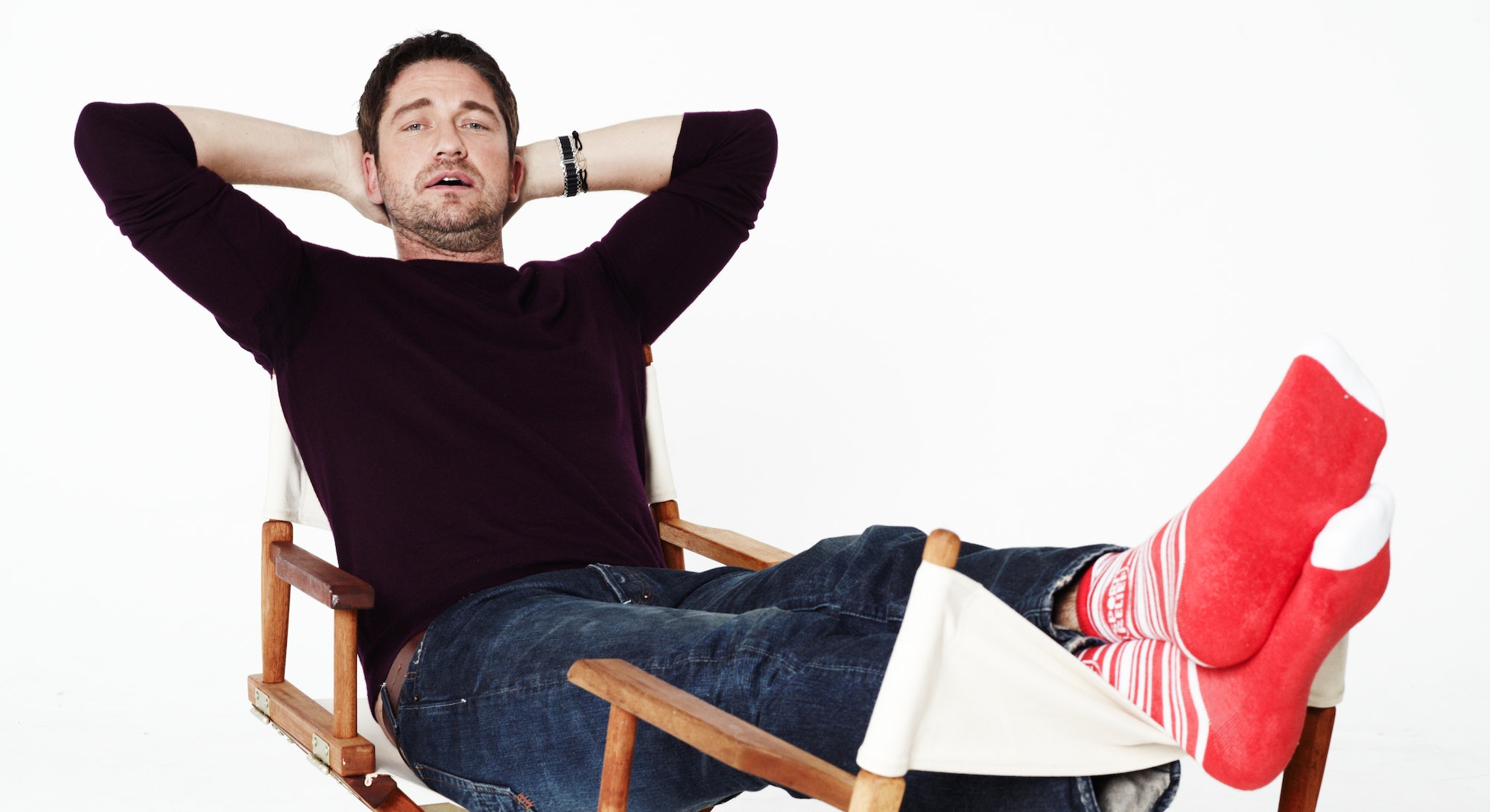 When one thinks of a Gerard Butler movie, one might think of grimy action, even grimier accents, and a rainfall of bullets and blood. Essentially: all the makings of a sturdy B-movie.

It’s the kind of action movie that Butler’s name has become synonymous with in recent years — the testosterone-fueled crowdpleaser full of rough men and rougher gunplay. Whether he’s protecting Aaron Eckhart from invading terrorists, protecting his bank-robbery haul from the police, or protecting the Earth from a geostorm, Butler has become the go-to king of the B-movie. But it’s a nickname that Butler is surprised to learn he’s been given.

“I think I’m like the king of the A-minus movie!” he jokes to Inverse. “I'd never heard that before, and now I feel complimented and at the same time, humiliated.”

But it’s an association he’s happy to embrace, especially with his latest film Plane, a taut 107-minute thriller in which he stars as a pilot who is forced to make an emergency landing in hostile territory. When his passengers are kidnapped by the militant terrorists who occupy the region, Butler’s Captain Brodie Torrance is thrust into an unlikely alliance with Mike Colter’s mysterious convict, who was being transported in handcuffs in Brodie’s plane.

“[It’s] a great setup for a white-knuckle entertaining ride,” Butler says in an interview ahead of the release of Plane, which hits theaters this Friday.

Inverse spoke with Butler about taking the controls for Plane (on which he’s a producer), how they pulled off the film’s one-take fight scenes, and what we can expect for one of his most anticipated B-movie sequels, Den of Thieves.

What initially drew you to this role?

There was a time when all my agents and my friend Christian Gudegast — who was actually originally attached to the project, he directed Den of Thieves — they all started going, “Plane, Plane, Plane.” And then I got the script and it's a page-turner. I think, “Is this something I could spend time with, a few months to a year with this character, with a story? Is this something that I would enjoy as an audience member? Is this something that has potential?” And it did all those things.

The first act is almost all set in this plane going through hell. As an audience, we all imagine, when you hear about a plane going down, “What must that have been like?” And we don't skirt by it. It doesn't happen in two seconds. There's no escape from this. You're watching everything happen. And that's only the start. Then you can actually get in more detail to these characters and how they react to that situation. What does it pull out of them? They’re on this island in this impossible situation and they're underdogs. It felt like a great setup for a white-knuckle entertaining ride.

What do you think it is about Brodie Torrance that sets him apart from other action heroes you’ve played?

It's funny because I still just see him as a pilot. It's not that he is really an action hero, it's more that these circumstances pull something out of him that he didn't even know he had. And he always knew that he cared for his passengers. He felt a sense of loyalty and duty toward getting them to the right place and making them feel comfortable.

Nobody knew on New Year's Day when he's flying to see his daughter in Hawaii, that he was going to end up on a remote island, crash-landing with a couple of people dead in his plane and be basically fighting terrorists. It's a whole new situation. How do you deal with that situation? How do you go into survival mode? Who do you delegate to? How do you keep the group from turning against you? What information do you give them? And what do you do with the big, scary, charismatic man on the plane who is clearly a danger to the passengers, and has very possibly murdered somebody? Do you leave him with the passengers to take them with you? When I unlock those cuffs, what have I unleashed?

This movie might best be described as a two-hander between you and Mike Colter. How did you shape the dynamic between your characters who are thrust into this forced alliance?

I'd love to make it sound more complicated than it was, but I have to be honest, from the second I met Mike — what a great guy, no ego, very collaborative, and also a great actor who can do so much with so little. And I was very envious of him in that role because I'm kind of the square. And then you got Mike, who is the epitome of adventurer, he's a bad boy. But it turns out, there's so much more to him than meets the eye. And he was a phenomenal actor.

There was a lot of respect going on, which is also part of our characters’ journey, this mutual respect that develops. And because there were no games, I said to him right off, “Would you mind if I have ideas to throw your way?” And I said, “By the way, same with me. If you have thoughts about something I'm doing and you don't like it, let me know.” That really sets such a great platform to dive in together. We get so much more color and feeling and fascination of that relationship. Because we aren’t playing games, it was like really trusting each other to be vulnerable in front of each other.

Kind of a silly question, but in many of your recent action movies, you play working-class American and have to put on an accent. But in Plane, you get to use your natural Scottish accent! Were you happy to do this for a change?

A relief. Because I take that American accent seriously. So if I'm doing an American accent, and I've done it many times now, I still start weeks out with a dialect coach most days. And I have my own sessions where I do warm-ups. I started thinking about it the minute I start walking around speaking in an American accent. So to actually play Scottish, there's just clearly more of a connection between me and who Brodie Torrance is as a captain. I think there's a lot of Celt in there that really suits that role. Maybe a lot of heart, but not a lot of know-how.

You’ve done many an action movie with heavy fight choreography, but I noticed that in some hand-to-hand combat scenes, the filming style changes up to a more shaky-cam style, Go-Pro shots. Was there something different about the fight scenes in Plane?

Very unique. Let me focus on the main one because I think it'll be most remembered in terms of a physical fight. The scene that we did in one shot with maybe the best cameraman ever worked with, this crazy Frenchman called Eric Catelan. And to pull off a fight sequence in one shot, it's very difficult to explain to an artist how hard that is because normally you have a camera and you break the fight down into six pieces, four or five hits in each piece. And then you go okay, the camera can be there, I'll punch you here. And I've got to get right within an inch.

This had about 60 moves in the fight. And that one camera had to be in the right place for every hit because if I got to kick you in the face and the camera’s in the wrong place, it clearly is not a kick. None of it’s usable. So a lot of rehearsal went into that. And then you got to do that and then go, “Now let's make it messy, and desperate and exhausting. And I'm fighting for my existence. I'm also fighting for the existence of everybody that I've left behind, all the passengers left at the plane.” That's this situation, which I feel blends so much more pressure into the fight.

A certain type of action film has become associated with your name — to the point that you’ve been dubbed “King of the B-movie.” How do you feel about that? What do you think it is about these movies that are so appealing?

I think I’m like the king of the A-minus movie! No, I’m joking. I'd never heard that before, and now I feel complimented and at the same time, humiliated. I love making these kinds of movies. There’s a big audience for these kinds of movies. They’ve given me, very fortunately, a big fan base. And they're not the only movies I've made; I've made comedies, I’ve made animated movies, I’ve made musicals, I've made small thrillers. But this, I would have to say, is my forte, my bread and butter. I love making them and I love watching them.

And always the challenge is to find a new way to take an audience into a situation and examine themes of loyalty, of courage, of trust, of nobility, of fear — all of these things. And you get to take that audience in with you, you ground these characters, make them as believable as possible. And it's like jumping. You're coming on a plane with us. You're coming to this crazy island. And you're gonna fight these rebels with us.

Last year, you began production on Den of Thieves 2. Can you give us any updates on that? What can we expect from it?

We didn't start production. We were about to start production. But now I'm shooting it in a couple of months. And it's a great script Christian [Gudegast]’s, a wonderful writer. We're off to Europe now. The last one was down and dirty and dealt with marital issues and some heavy stuff. And that was great. You really climbed into that to the characters’ souls. But this one's a lot more fun.

I see Donnie’s [O'Shea Jackson Jr.’s character] at work. And I'm screwed if I'm going to sit my ass in LA and let this guy go and take over Europe. So I go to hunt him down. And it's very surprising where it takes us.