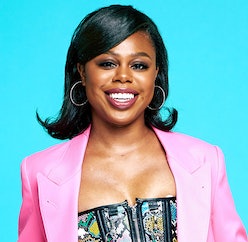 Gail Bean is leaving quite the impression on Hollywood.

After turning heads with her heartfelt performance as Jasmine in the Sundance darling Unexpected, Bean started turning up all over the place with bit parts on everything from HBO’s Insecure to FX’s Atlanta to ABC’s landmark medical drama Grey’s Anatomy. But it’s the gritty realism and emotional authenticity she regularly brings to the character of the crack-addicted Wanda Bell, in the John Singleton-created period ‘80s drama Snowfall — which documents the rise of the crack epidemic in South Central Los Angeles — that will most certainly position her for great things to come.

Whether it’s through manifesting, prayer, or just hitting every day with a positive outlook, Bean’s creative process has been working out. And, from the sound of things, she’s got some big goals on her mind.

“For me, Marvel!” she tells Inverse. “I just have to do a project that the youth in my family can watch.”

As we wait for new episodes of Snowfall to drop (FX renewed the show for a fifth season back in March), Inverse caught up with Bean to throw things back to a simpler time: high school. Here, we talk about everything from her tomboyish early years, her love for labels, and, of course, *NSYNC.

I was the kid you couldn't help but love: Thoughtful and caring. I loved my family so much; oh my gosh, I just thought they were gold. Only to learn that they were better than gold. Constantly laughing. Super smart. I always knew the right things to say. See, I talked a lot so eventually, something I said was bound to be right. I was a kids kid, though. I have five brothers. I'm the only girl and I'm the baby so I was a tomboy by nature. I'd jump off roofs, climb trees, do all the rough stuff they did, all while being scary. I think that's why I never hurt anything. I was a cautious daredevil, always mindful of the possible danger and mapping everything out to make sense.

It's funny because in some areas I'd be super-advanced like education, sports, people, etc. But in other areas, I was behind due to fear. It took me forever to learn how to swim, to ride a bike, and to ride roller coasters. I was afraid I'd drown if the water went over my head. You know how the parents hold on while you're riding to keep you straight? I was too scared that I'd fall off my bike so I never wanted anybody to let it go. And then there are roller coasters ... I feared it would fly off the track and I'd die. I know that's a bit extreme but my imagination has always been on 10. Like I can see how things will play out in different ways. Overall, though, I was a bomb kid.

NSYNC was my favorite band as a kid. I loved them and I'm not ashamed to say it!

They had hits, swag, and looks. Don’t let an NSYNC song come on, or else I'm going full concert mode!

Oh man, I was definitely a label girl: Ecko, Girbaud, Coach, Steve Madden, Baby Phat. I'd say my favorite piece of clothing had to be a pair of bellbottom Levi jeans. They weren't super flare but they def had that snug thigh fit and gave a little oomph at the ankle area. I loved those. They went with everything.

My first, most vivid memory of the internet is dial-up. Oh my gosh! Not being able to talk on the phone if someone was online! That was the worst. Or getting kicked off while on the internet because someone tried to use the phone! It was excruciating. Thank God the internet has evolved.

Love is real. When you know, you know. Love can be easy. It doesn't have to be complicated, you know? It can really be whatever you make it. I believed all of that at 15, but then life somehow started to taint my little belief system and I had a skewed version of what I thought love was. Thank God I'm back to knowing the truth about love.

What high school teacher did you like the most and why?

Ms. Evans. She was a Black Delta woman. She simplified Algebra/Calculus and her class was super fun. She taught both me and my brother. We were in the same class. I have no idea how that happened, but it was a great time. Ms. Evans was also my cheerleading coach.

Hands down Unexpected was my first big break. We went to all the festivals and did extremely well. Yo, once you get into Sundance, the rest is history.

No, but seriously it gave me the much-needed exposure to break myself into rooms in Hollywood. I still had to prove myself time and time again after that but that's a whole other story.

When the producer of Unexpected called to deliver the news about us getting into Sundance, I tweeted it immediately. She called me back shortly after that and said it wasn't announced yet so I had to delete that tweet asap. Embarrassing. That was my first professional failure.

What’s your cant-miss prediction for 2030 and why?

2030 is so far away. For me, Marvel! After all, I just have to do a project that the youth in my family can watch.

For the rest of the world, not much progress. Hopefully a change in how our country is run, but I highly doubt it. That's why I make sure I do my part. I'm certain the housing market will flatten out and the cost of living will be affordable again. The majority of cars will be electrical and laptops won't be a thing anymore.

My 15-year-old self would be smiling ear-to-ear, jumping up and down screaming, “That's me and I'm hella lit!” She would be proud of how confident I am in my mindset. She would be inspired by my perseverance. She would say, “Yep, that sounds about right,” in regards to my nonchalance of what people think about me. She'd ask to come on set for sure.