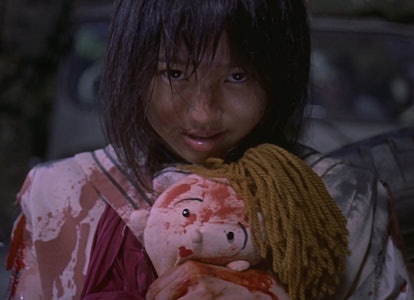 Dystopian death games orchestrated by authoritarian governments have been a staple of science fiction ever since The Most Dangerous Game popularized the "man hunting man for sport" trope in 1924. In recent years, however, the genre has become associated with uplifting stories about rising up against fascism — usually with revolutions led by teenagers.

That's not what happens in Kinji Fukasaku's last film, a classic sci-fi action-thriller that pulls a sort of reverse Lord of the Flies mixed with enough ultra-violence to shock audiences 20 years after its release.

There is no promise of an uprising in Battle Royale. No loophole that the teens can exploit to their advantage. No winning over the audience with a love story that lets them break the rules. Instead, friendships are shattered, rivalries get fatal, and many, many, many teens are brutally murdered.

The story goes like this: At some point, Japan falls into economic recession. In order to crush any potential rebellion, the government enacts the "Battle Royale Act," which annually selects a random high school class to be sent to a remote location. There, the kids are given random weapons and told to murder each other until only one survives. Any escape attempt or rebellion is punishable by death via remote control explosive neck collars. Though the class includes dozens of kids, the film mostly focuses on Shuya Nanahara (Tatsuya Fujiwara) and Noriko Nakagawa (Aki Maeda) as they try to make sense of their situation — and witness former friends murder each other.

Watching this movie in 2021, you can see how Battle Royale became so influential it spawned an entire video game genre. The titular competition operates on very carefully laid-out rules that give it a video game-like quality. The weapons are all random — you’re just as likely to get a shotgun as a saucepan lid. There are also "danger zones" that automatically trigger the explosives in the collar of any student caught inside it. If you’ve played a round of Fortnite or Warzone, this should sound pretty familiar.

The problem with these games is that they still miss one key component that makes Battle Royale so unique even today, its historical context and sense of doom. Director Fukasaku was drawn to adapt Koushun Takami's book into film because it brought back memories of his own time as a teenager during WWII, where his classmates were forced to use each other as shields while working at a munitions factory that came under constant artillery fire. (Fukasaku had to clean up the dead body parts.)

A generation of adults failing the young clearly informs the tone and story of Battle Royale. This is also shown in the score, which uses classical music to emphasize that the adults are firmly in control.

At the same time, Battle Royale deeply understands what it's like to be a teenager, where every problem can feel like the end of the world. Most of the brutality comes from teenage passions like unrequited love, loyalty to your friends, and jealousy. We see several kids use their dying words to confess their love to their crushes or express regret they didn't hang out with other people.

Battle Royale's reputation may be its ultra-violence, but any movie can be over-the-top and gory. What makes this one stand out is the matter-of-fact way it presents that violence. There are moments of gore, for sure — we see students get beheaded by katanas and shredded by machinegun fire — but it's the quieter and quicker deaths that have the biggest impact. One quick cutaway shows two teenagers who hung themselves to avoid killing their friends.

That the film uses actual teenagers in the cast only adds to the gut punch, which is part of the reason why the film was so heavily criticized by the Japanese government and given a rare R15+ rating. That’s also why it took years before it was shown legally in the U.S.

Battle Royale may have spawned dozens of copycats and an entire video game genre, but even 20 years later, there are few action-thrillers that hit as hard or have as much to say as this one.