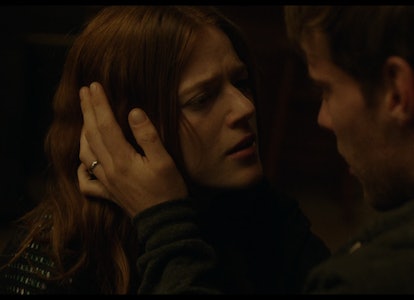 Bea and Paul are the kind of sickeningly cute couple that gets on everyone’s nerves.

Leigh Janiak’s eerie 2014 sci-fi horror movie opens with the couple’s wedding video, as they tell twee stories about their first date and Paul’s proposal, and share inside jokes related to pet names for each other and the cinnamon buns they got instead of a wedding cake.

When Bea and Paul (played by Rose Leslie and Harry Treadaway) arrive at their honeymoon destination, a remote cabin owned by Bea’s family, they can’t keep their hands off each other. They lovingly call each other “husband” and “wife” as they make pancakes for breakfast the morning after an all-night sex marathon.

But is their happiness just a facade? How well can two people truly know each other, even after committing to spend the rest of their lives together? Those are the questions that director and co-writer Janiak ponders in this unsettling slow-burn movie, alongside more visceral horrors of an alien presence in the woods surrounding the cabin.

Even before Bea encounters that dangerous entity, the cracks are starting to show in the relationship. Paul makes an offhand comment about getting Bea pregnant, and she stiffens, saying that she’s not ready for that discussion, and he has to quickly backtrack, assuring her he wasn’t serious.

Giving him a tour around the cabin, she offers glimpses into her rugged childhood of hunting and fishing. “Who are you?” he asks playfully after she tells him a story about exploring the wilderness as a kid. That question takes on more and more weight as the movie progresses, as the fundamental nature of Bea’s identity seems to be changing.

When Bea and Paul walk to a nearby restaurant, they encounter Will (Ben Huber), a childhood friend Bea hasn’t seen in years, who seems to be distraught and distracted. He starts to turn them away before recognizing Bea, calling her Trixie and reminiscing about the fun they had together when they were kids.

Paul wants Bea, not Trixie, though, and he’s clearly insecure about how he compares to the rugged Will. He’s a Brooklyn hipster, not an outdoorsman, even though he attempts to wake up early the next day to catch a fish for dinner. Bea’s gone when he wakes up, and he eventually finds her naked and disoriented in the woods. “I’m fine,” she says, and that becomes her refrain throughout the rest of the movie, the words that married people use to dismiss each other when they are clearly not fine. Bea still looks like Bea, but whatever is projecting those bright lights in the woods has changed her somehow.

As Bea grows more and more distant, Honeymoon turns into a sort of two-person Invasion of the Body Snatchers, with the increasingly panicked Paul as the Kevin McCarthy or Donald Sutherland of his own marriage. The only other people for miles around are Will and his wife Annie (Hanna Brown), who seems to be suffering from the same afflictions as Bea. They both have mysterious injuries on their thighs, they both appear to forget how to perform basic tasks (Bea can no longer properly cook French toast), and they both secretly write down facts about their own life to be repeated verbatim. At one point, Paul catches Bea practicing lines in the mirror for a later conversation.

That assertion of “I’m fine” elides all of Paul’s concerns at first, and Bea even gaslights him a bit, chiding that “You’re ruining our time together.” As she sleeps soundly in bed, he lies next to her, wide awake, suddenly finding a stranger next to him instead of his wife (or the person he thought was his wife). Leslie and Treadaway embody that shift over the course of the movie, with subtle differences showing the contrast to the people introduced in the opening scenes.

It’s clear that something is wrong with both Bea and Annie, and by the end of the movie, there isn’t any ambiguity about whether the women have been taken over by an otherworldly force. At the same time, it’s clear that both Will and Paul have issues with anger and insecurity, and Paul’s response to Bea’s condition is sometimes hostile and possessive. His immediate assumption is that she was meeting Will in the woods, and even later when he’s certain that she’s the victim of an attack, he still directs most of his anger at her. The formerly teasing question of “Who are you?” becomes an accusation.

Bea’s gradual loss of self is chilling, but Paul’s response is scary, too, and both actors demonstrate how seemingly blissful people can turn into adversaries in the span of just a day or two. “I just want us to be us,” Paul pleads with Bea late in the movie, and he’s not only talking about her evolution into some kind of alien vessel. He’s also talking about the cutesy good times in that wedding video at the beginning of the movie, the performative in-jokes and lovingly crafted stories. Was that all a lie? What is “us,” anyway? In Honeymoon, that entire concept is as unknowable as the invaders lurking in the woods.

Honeymoon is streaming for free on Crackle, Plex, Pluto TV, Popcornflix, Tubi, Vudu, Hoopla, and Kanopy in the U.S.