“How freakin’ awesome was that?” 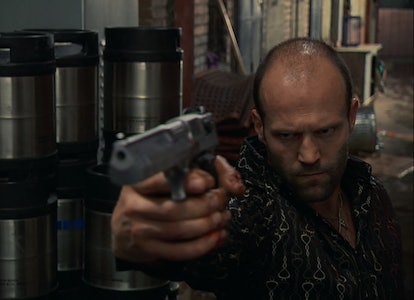 Jason Statham is ridiculously badass in many of his best-known roles, but none of the actor’s unhinged characters can claim to rival Chev Chelios. A hitman who gives up a life of crime to be with his girlfriend Eve (Amy Smart), Chelios is rewarded for this change of heart by villains who inject him with an experimental poison, one that will kill him unless he can keep his body pumped full of adrenaline. In other words: if Chelios doesn’t engage in constantly reckless behavior, he’ll end up dead.

This same logic governs both movies starring Statham as Chelios. Filled with dizzyingly nonstop violence, gore, sex, deviance, and generalized insanity, this high-octane duology bombards its audience, as if the movies themselves will wither and die if they don’t deliver stylish depravity at breakneck speeds.

The brainchildren of demented writer-director duo Mark Neveldine and Brian Taylor, 2006’s Crank and 2009’s Crank: High Voltage have to be seen to be believed. Luckily, both are streaming for free online.

Crank opens on the strains of Quiet Riot’s “Metal Health,” as the movie’s title is rendered in graphics that appear held over from an 8-bit video game. The Crank movies might be the best video-game movies not based on video games, using many familiar video-game elements to tell the story of Chelios’ quest for revenge. Chelios is introduced via a distorted POV shot, as if he’s a player dropped into the middle of a simulation and trying to figure out its rules. He wakes up disoriented and sick, learning of his potentially fatal injection after playing a DVD labeled “Fuck you,” left behind by gangster Ricky Verona (Jose Pablo Cantillo).

As Ricky explains, he’s poisoned Chelios with a serum meant to kill him within an hour, as retaliation for Chelios’ failure to take out his most recent target. The particulars of this plot aren’t all that important, and Neveldine and Taylor don’t spend too much time dwelling on details. They’re too busy reveling in Crank’s ever-present stylistic quirks, from the POV shot to various onscreen graphics and zooming the camera all the way inside Chelios’ chest to show his weakening heart.

A quick call to the shady Doc Miles (Dwight Yoakam) gives Chelios the lowdown on his situation: The only way to delay the poison is through continued shots of adrenaline, the procurement of which appears to come naturally to a guy like Chelios. He immediately sets out to track down Verona, with seemingly every lowlife in LA (and half the city’s cops) tailing him. He’s like the human equivalent of the bus in Speed, risking immediate death if he slows down for a moment.

Chelios does anything and everything he can to keep the action going, as do Neveldine and Taylor. “You saying this is medicinal use coke?” asks a skeptical associate when Chelios demands cocaine, then eagerly snorting it up from a dirty bathroom floor.

Crank consistently matches Chelios’ energy as he rampages across LA, raiding a convenience store where he steals energy drinks (and some flowers for Eve) and even storming a mall. In the latter sequence, Chelios casually crashes his car through the mall’s front doors while being chased by police, calmly talking to Doc Miles on his cell phone the entire time.

Though Chelios’ life is in imminent danger, he seems to be having nearly as much fun as the filmmakers. “How freakin’ awesome was that?” Chelios exclaims after chopping off a bad guy’s hand with a meat cleaver. Later, he picks up said guy’s severed hand and uses a gun still in its grasp to shoot him in the head. After infiltrating a hospital in search of adrenaline-producing epinephrine, Statham spends half the movie running around in a hospital gown, but he still looks cool and collected.

It’s not really a spoiler to say that Chelios appears definitively dead at the end of Crank. To wit, he falls from an airborne helicopter, bounces off a car, and lands on the street. But that’s only a minor obstacle for him in sequel Crank: High Voltage, which is somehow even more insanely over-the-top than its predecessor, pushing Chelios even further into the realm of the superhuman (although he’s more like Bugs Bunny than Captain America).

Chelios’ body is so remarkably resilient that, in the sequel, a powerful underworld group decides to strip him for parts, starting with his heart. Since they need him alive, these criminals replace Chelios’ living heart with a mechanical one; once he escapes their clutches, Chelios consequently has a new set of requirements he must meet to keep himself alive. Instead of cruising for adrenaline, Chelios needs jolts of electricity to keep his artificial heart pumping; as such, he gets zapped by car jumper cables, an electrified dog collar, a taser, and truly any other source he can find.

The plot of High Voltage mirrors that of the first film, sending Chelios all over LA to track down the crime boss responsible for his condition. Neveldine and Taylor push their style further into the realm of abstraction, with experimental segments including a flashback to Chelios’ childhood presented as a talk show (featuring Spice Girl Geri Halliwell as his mom) and a kaiju-style battle between puppet versions of Chelios and one adversary. There’s more violence, more nudity, and more deliberately tasteless jokes.

Eve, sweetly devoted in the first Crank, has become a stripper in Chelios’ absence (“A lot of things have changed since you died,” she explains), though Smart continues to play the sometimes thankless role with the same playful energy Statham brings to Chelios. Eve is similarly cartoonish, a literal animated light bulb even appearing over her head when she has an idea, and Smart makes sure she fits in with the more-is-more aesthetic.

As absurd as these films are, what makes Crank and Crank: High Voltage work is that every element on screen fits Neveldine and Taylor’s gonzo vision, from the actors to the setting to the action setpieces. This duo made two more movies (2009’s Gamer and 2014’s Ghost Rider: Spirit of Vengeance) before going their separate ways, but they never recaptured the magic of Crank.

“You should be in a fuckin’ medical journal,” Doc Miles at one point marvels to Chelios, not believing all the man has survived. The Crank movies operate on exactly that level of glorious inexplicability.

Crank and Crank: High Voltage are streaming for free on Peacock in the U.S.