“She cooks as good as she looks.” 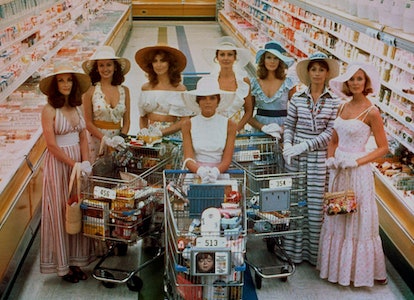 Everyone knows what a Stepford wife is, but watching the 1975 movie that popularized the term is still a bracing experience. Based on the 1972 novel by Ira Levin, The Stepford Wives treats suburban conformity as a sort of slow-motion nightmare, engaging with contemporary issues of feminism and shifting values while telling a chilling story about the loss of identity.

But the highlight of this underrated science fiction classic is the subtle melancholy Katharine Ross brings to her lead performance right from the beginning, even before wife and mother (and aspiring photographer) Joanna Eberhardt moves from her Manhattan apartment to a spacious house in the suburb of Stepford.

As The Stepford Wives opens, Joanna stares wistfully at her reflection in the mirror, pondering her place in the world, while the last of her belongings are carried out of the apartment she shared with her lawyer husband Walter (Peter Masterson) and their two daughters. The soundtrack is filled with the noises of the city that Joanna is about to leave behind. When she gets into the family station wagon to head out of town, Joanna spots a teenage boy across the street carrying a crude blow-up doll, unknowingly glimpsing a distorted vision of her potential future.

In Stepford, most of the women are only slightly more human than that blow-up doll. Placid music plays as the Eberhardt family drives into the countryside, and Stepford itself is verdant and peaceful, full of lovely homes with well-manicured lawns. The women are lovely and well-manicured, too, as demonstrated by the Eberhardts’ neighbor Carol van Sant (Nanette Newman), dressed demurely in an outfit that would have fit perfectly into a 1950s sitcom.

Carol brings over a casserole to welcome her new neighbors, speaking in soft, deferential tones to Walter when she drops it off. “She cooks as good as she looks, Ted,” Walter says appreciatively to Carol’s husband the next day.

The concept of the Stepford wife is so ingrained in pop culture that it’s unlikely anyone coming to this movie for the first time will be unaware of what’s really going on in town. But even if you know exactly what’s coming, screenwriter William Goldman and director Bryan Forbes still draw you into the world of Stepford and the escalating terror that is Joanna’s life. Joanna doesn’t get the full picture of what the mysterious Stepford Men’s Association is up to until the end of the movie, but every seemingly benign interaction in town contributes to the sense that something is deeply wrong here.

Joanna’s main ally is fellow former city dweller Bobbie Markowe (Paula Prentiss), a tall, lanky force of nature with a twangy voice and a penchant for mischief. It’s Bobbie who leads the duo’s efforts to shake things up in town, first by forming a competing women’s association to counterbalance the secretive men’s group, and then by investigating what might be causing so many previously vibrant women to turn into docile hausfraus seemingly overnight.

Joanna is serious and introspective, while Bobbie is boisterous and snarky. When they first meet, Bobbie pulls a dessert out of her purse: “Two things I always carry, Tampax and Ring-Dings.” These are two things that the other wives of Stepford apparently have no use for.

“I like to watch women doing little domestic chores,” says creepy Men’s Association president Dale “Diz” Coba (Patrick O’Neal) to Joanna as she’s setting up for a Men’s Association gathering at the Eberhardt home. That’s clearly one of the only things that Diz likes about women, and nearly every man in Stepford shares his views, including Walter, who protests a little too much about how much he loves Joanna but is eventually throwing words like “crazy” and “unreasonable” at her.

It only takes a few weeks in Stepford to turn this sophisticated city-dweller into a regressive chauvinist. The town transforms the men along with the women, just in different ways.

Of course, it’s tough to sympathize with Walter or any of the Stepford men, and the movie doesn’t excuse them. But making Walter into a real character underscores how much he’s actually giving up in exchange for his dream of the perfect wife and the ability to turn a spare room into the 1970s version of a man cave.

The filmmakers give Joanna and Bobbie far more depth, with hopes and fears and ambitions that stretch beyond their positions as housewives. When Joanna tells Bobbie a story about her college boyfriend, there’s real regret in her voice, and when she explains to a gallery owner why she wants to exhibit her photography, Ross conveys Joanna’s yearning to be a whole person outside of marriage and family.

Joanna and Bobbie attempt to start a “consciousness-raising” group with fellow Stepford wives who only want to talk about cleaning products, but even these apparent rebels are reluctant to embrace feminism. “I messed a little bit with women’s lib in New York,” Joanna tells Bobbie almost apologetically. “Didn’t we all?” Bobbie responds flippantly.

Even just vague overtures toward women’s liberation are too much for the men of Stepford to handle. “Why? Because we can,” Diz tells Joanna when she confronts him about what he’s doing to the women of Stepford, but it’s not just that. As scared as Joanna and Bobbie are of losing their individuality, Diz and his cronies are far more afraid of that individuality being asserted.

The Stepford Wives is streaming for free on Tubi and YouTube in the U.S.