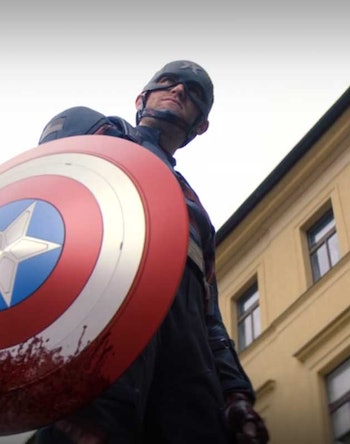 It’s the closest thing the Marvel universe has to a mantra. For the Avengers, their superpowers mean they have a duty to preserve justice on Earth, whatever that looks like to them. But gone are the days of Steve Rogers, beholden to the American way; and Tony Stark, capitalist billionaire following his code of justice. The heroes who left behind post-Endgame are now left to find their own version of responsibility.

For America, this means an attempt at a new Captain America. Instead of Sam Wilson, who worked and fought alongside Steve Rogers, John Walker has only seen Steve from the outside: on posters, in publicity appearances, in history books. His experience as Captain America hasn’t been much different. The first time we see him, he’s appearing at his old high school.

To Sam and Bucky, it’s obvious what John is missing — a correct mindset. Steve saw himself always as a scrawny patriotic kid. John sees himself as Captain America, who has to fill the shoes of Steve Rogers, a literal super-soldier. John Walker may not have superpowers, but he does have great power. He has the power of the Captain America image, and with that comes a sweet shield.

The Serum’s the Thing

In The Falcon and the Winter Soldier Episode 4, the Super Soldier Serum becomes a major tipping point for almost ever character. It begins, as all the best thematic explorations do, with a monologue. Baron Zemo muses on the concept of super-soldiers themselves, saying the warped aspirations surrounding them are what led to the Nazis, Ultron, and even the Avengers.

Mentioning any group in the same breath as the Nazis is damning, but Zemo mentioning the Avengers obviously upsets Sam and Bucky. To Zemo, the serum is the issue, as exhibited by him destroying the vials later. Super soldiers are supremacists, inherently. They are fundamentally “better,” and fight for whatever they believe in, whether that’s through patriotism, like Steve, or brainwashing, like Bucky.

Bucky’s retort to Zemo is that the serum never corrupted Steve, and Zemo agrees, but reminds him there will never be another Steve Rogers. The Flag-Smashers have a different opinion. Later in the episode, Karli is told by one of her comrades he didn’t think there could be another Captain America until he met her.

After being ashamed of his defeated by the Dora Milaje; African women who “weren’t even super soldiers,” John Walker gets the chance to possess the one thing he thinks is keeping him from being Steve Rogers — the serum.

He discusses the serum with his partner Lemar, who says it can only be a good thing in the right hands. “Power just makes a person more of themselves,” he says. By this logic, anyone with good intentions will resist being corrupted by superpowers, and anyone with ill intent will let it go to their head. Steve Rogers was good, so the serum made him better. Karli Morgenthau was bad, so the serum made her worse.

But there’s a common saying that refutes this point — a phrase coined by politician John Dalberg-Acton. “Power tends to corrupt, and absolute power corrupts absolutely.”

Power doesn’t care about intent. In a position of authority, corruption is inevitable. Bucky may have used Steve Rogers as the exception to this previously, but could Steve have been corrupted? Behind the pop culture notebook and folksy sayings, he was 100% part of a propaganda machine, and with that comes some corruption. He served America as an institution, not America as a people.

The theme of this episode — how power, be it authority or superpowers, changes people — is an academic mystery as well. In a now-infamous experiment, Stanford psychology professor Philip Zimbardo attempted to isolate how power affects people by staging a mock prison in a wing of the university. A group of participants were divided into “prisoners” and “guards” randomly and were supposed to simulate the prison dynamic for two weeks.

What followed is a great cause of debate in scientific ethics, but no matter what occurred, the experiment was abandoned after six days. The guards embraced their roles, actively berating their own peers who were chosen as prisoners. The prisoners obeyed the guards, even turning on their fellow prisoners if instructed to.

While the experiment may not have been the most ethical, the point still stands: power leads to abuse of power.

Even if Bucky was right and Steve was the one mythical exception to this rule, there will never be another Steve Rogers. Karli Morgenthau is corrupted. John Walker is corrupted.

Dalberg-Acton’s catchy phrase about absolute power is handy to have when overpowering evil dictators, but there’s a second part of the quote that often gets left out: “Great men are almost always bad men.”

John Walker is the epitome of this when he takes the serum and goes on a violent streak. But Sam and Bucky are also great men. Steve was a great man. What makes those men different from John Walker?

They understood how easily their powers could accentuate their flaws and worked against them. Sure, Bucky is still having some violence issues and Sam’s self-worth kept him from taking on the Captain America mantle, but they know the duty, the responsibility ahead of them.

John and Karli may both have worthy missions, but their motivations for the serums are selfish. They want it to have an upper hand, to have an advantage. Yes, this is why Steve was given the serum as well, but he knew his power was something to be used wisely because of his backstory, because of his upbringing.

The Falcon and the Winter Soldier is redefining what it means to be a hero. In fact, it may just reveal the supervillain of the MCU itself is the simple concept of superpowers. Superheroes are inherently supremacist, and the only way to reconcile that is for each superhero to come to terms with this simpl truth and take steps to counteract it.