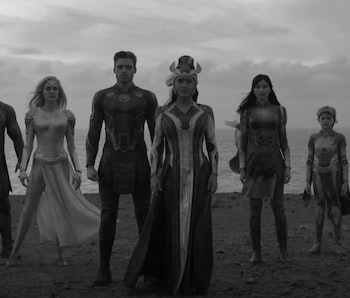 There’s a lot to look at in the trailer for Eternals, director Chloé Zhao’s long-awaited entrance into the Marvel Cinematic Universe.

With a style dissimilar to the color-corrected polish of previous Marvel movies, Eternals feels, in a word, “weird,” and its aesthetic is unique enough to at least momentarily distract from one purple elephant in the room: namely, the unanswered question of what the Eternals were doing when Thanos snapped half the universe out of existence. There’s one crucial, exciting reason that Eternals looks so noticeably different from other Marvel movies: Zhao herself.

Before Marvel teased audiences with the first trailer for Eternals, Zhao won Best Director at the Oscars for helming Nomadland, this year’s Best Picture winner. It’s fascinating to compare Zhao’s last film to her upcoming Marvel blockbuster and note some surprising similarities. If you’ve seen the trailer and are trying to figure out why Eternals looks nothing like, say, Avengers: Endgame, Zhao is why.

Who is Chloé Zhao as an artist?

Nomadland is an elegant road drama about a middle-aged American woman named Fern (Frances McDormand, who won an Oscar for her performance) who lives hand-to-mouth across the western United States. Fern is one of several hard-up baby boomers who’ve chosen to live in vans, taking up seasonal jobs and moving from place to place without setting down roots. Fern makes friends easily but soon parts ways with those she encounters, continuing a solo search to discover both where and how she can belong somewhere.

Zhao, whose previous films include 2015’s Songs My Brothers Taught Me and 2017’s The Rider, has demonstrated a deep interest in people and their environments, and the relationships people create with their surroundings. That preoccupation is heightened by Zhao’s filmmaking style, involving handheld cameras, free-flowing movement, natural lighting, and wide-angle lenses that allow her human subjects to be engulfed by the worlds around them.

Nomadland is Zhao’s third feature film and collaboration with cinematographer Joshua James Richards; it’s a sublime demonstration of her voice as an artist. The Oscar-winning feature also offers tantalizing hints of what’s in store for Eternals.

How is Zhao’s realism unusual?

Zhao and Richards fill Nomadland with picturesque sunsets, positioning the sun low enough that it can backlight or sidelight scenes (an effect often achieved with electrical lighting). Zhao also lets the camera react to her actors, not the other way around (more typical of a Hollywood production).

People move without cameras present all the time, and Zhao attempts to replicate that in her work. Zhao’s actors are usually in real locations, as opposed to sets that can be pre-lit and sectioned off but feel more artificial for it. Many locations in Nomadland are real places you can visit, like the Badlands National Park and the adjacent Wall Drug.

There’s a symbiotic relationship within Zhao’s “realism,” through which its practical benefits enhance her artistic intentions. Zhao worked with a very small crew of 36 to make Nomadland, a fraction of a Hollywood production that would normally employ hundreds. With her natural approach eschewing mechanical lighting and makeup, Zhao and her crew could move nimbly from one location to the next. Such an approach befits the subject matter of Nomadland, in which characters travel light and often, never forming too many attachments.

As an artist, Zhao owes plenty to Terrence Malick (which she readily admits). His acclaimed films — including Badlands (1973), The New World (2005), and To the Wonder (2012) — are intensely visual and philosophical, with a gorgeously realist style and reliance on magic-hour light that is also present in Zhao’s films. But Zhao is still very much her own artist. In an interview with American Cinematographer, she said:

“Terry’s films have such a huge influence on Josh and me. Beyond all these things we learn from him, like shooting at magic hour or with wide-angle lenses, the most important thing is what cinema really means to a filmmaker. Terry needs to explore something he wants to understand about the world, about human existence, and that shines through his cinema. In my first three films, I’m asking these questions as well.”

What this means for Eternals

With so much naturalistic filmmaking at the center of Nomadland, one wonders whether Eternals, a sci-fi adventure about ancient aliens living secretly on Earth, must seem like an impossibly different movie for Zhao. This director likes to focus her lens on real people, not actors, and American nomads are undoubtedly more natural on-camera subjects than space aliens created by Jack Kirby.

Eternals will be a different movie for Zhao just as much as it will be a different movie for Marvel. From what we can see in the trailer, this superhero blockbuster exists as a fascinating collision of Zhao — her wide lenses, natural lighting, and focus on sensory experience — and the MCU machinery, which offers all the sets, lighting, wardrobe, makeup, VFX, stunts, and other Hollywood must-haves that have been less present in Zhao’s previous work.

Funnily enough, Zhao surprised Marvel’s Kevin Feige with her ability to capture stunning visuals without green screens. It should be noted as well that Zhao isn’t working with Joshua James Richards as the cinematographer on Eternals, instead teaming up with Ben Davis, whose body of work encompasses Marvel entries like Guardians of the Galaxy, Avengers: Age of Ultron, and Doctor Strange. His resume also includes Three Billboards Outside Ebbing, Missouri, the 2017 film that earned Nomadland star McDormand a previous Oscar for Best Supporting Actress.

We can see pieces of Zhao’s vision in the Eternals trailer. A moving camera immerses itself among primitive humans, who stand atop cliffs as a giant spaceship approaches them. Setting suns, meanwhile, light characters naturally. There’s a grounded majesty in the trailer that allows Eternals to feel more like Nomadland than The Lord of the Rings, for example.

But while fans expect alien superpowers to be visualized through pricey effects, they might not expect the movie’s more character-focused drama to look so natural and dreamlike. Though its action sequences will surely remind everyone of the film’s place in the MCU, Eternals’ quieter moments will likely showcase Zhao’s unique gifts, even in scenes as small as characters sitting around and discussing their place in a larger universe. Eternals might not feel quite like a normal Marvel movie, but it can definitely be a new kind of Chloé Zhao movie.