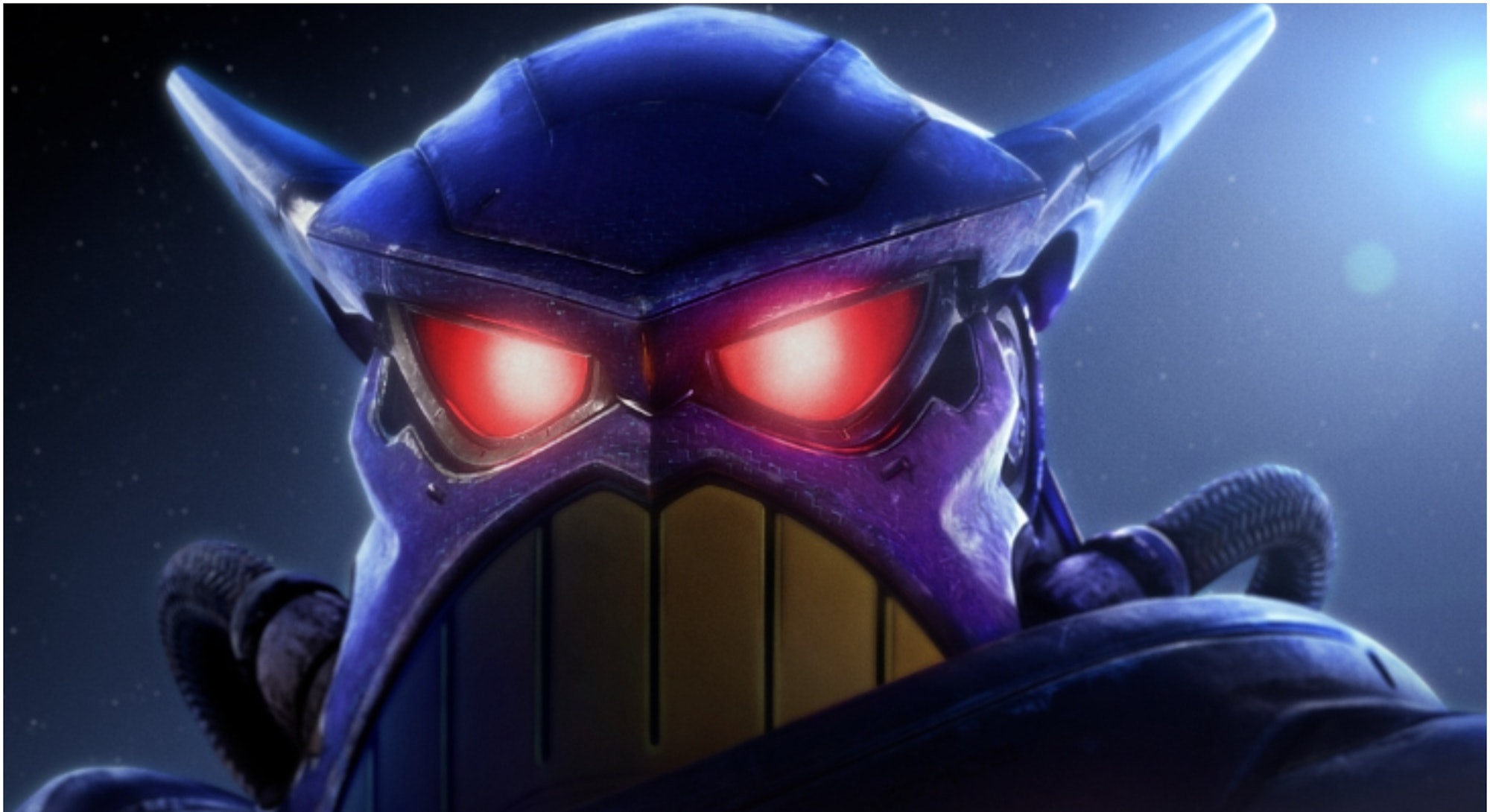 In the original Toy Story, Emperor Zurg was nothing more than a name.

Introducing himself to Andy’s toys, Buzz Lightyear proclaims: “As a member of the elite Universe Protection Unit of the Space Ranger Corps., I protect the galaxy from the threat of invasion from the evil Emperor Zurg, sworn enemy of the galactic alliance!”

So when artist Ken Mitchroney was tasked with creating Zurg for Toy Story 2, that little speech was all he had to go on.

“I wanted him to represent all the different types of evil bad guys out there,” Mitchroney tells Inverse.

He turned to the Fantastic Four’s Doctor Doom and Flash Gordon’s Emperor Ming and combined them with disparate elements from opera, an old Sean Connery movie, and even the taillights of a Dodge Viper. Together, they formed a razor-toothed, Darth Vader-esque nemesis that looked very much like he would in the final film, even though his depiction was intended to be temporary.

Nearly 25 years later, Zurg has been immortalized on countless bits of Toy Story merchandise. Aside from Buzz Lightyear himself, Zurg was the only other Toy Story character to make it into Lightyear. While the movie faced some criticism for the recasting of the title role and a predictable storyline, it did hold a handful of genuine surprises, the biggest of which dealt with the origins of Emperor Zurg.

With Lightyear finally streaming on Disney+, Inverse caught up with the man behind Emperor Zurg to uncover the supervillain’s real-life origin story.

Inverse: How did you come to work at Pixar?

Ken Mitchroney: Well, about 1990, I quit Hollywood. I’d worked on a bunch of cartoons, but I was newly married and tired of sleeping on my friends’ floors. So I moved to Florida and opened up Last Laff Studios. My staff and I did a lot of good contract work, but it was all hand-to-mouth and about eight years later, I was shutting it down. Suddenly, my buddy Jeff Pidgeon — who I’d worked with on Tiny Toons — stops by and begins telling me about Toy Story 2. Which, originally, was going to be a direct-to-video sequel to Toy Story.

When I saw Toy Story a couple of years earlier, I was blown away by it. I knew that was the future, so when he told me they were looking for people, I told him I wanted in. Shortly after that I was hired at Pixar and moved to the Bay Area — which I love — and began working on Toy Story 2, Monsters Inc, and a little bit of Bug’s Life, too.

Why were you chosen to design Zurg?

At first, Zurg was just a name that [Toy Story writer] Andrew Stanton came up with for the first film. There was no Zurg design and the guys needed one when they began working on the first few scenes of Toy Story 2. Ash Brannon said to me, “Ken, you’re the only one here who’s done comic books so why don’t you draw us a Zurg? It won’t be for the show — just a placeholder for the storyboards.” And I said, “Okay.”

That evening, I did a handful of drawings and tried to find a design theory for him. Once I was happy with it, I got out some sculpey and sculpted his head. Next, I went out to my hot rod shop and painted it with purple metal flake [spray paint] and thought it looked kick-ass. Then I gave him clear eyes and a yellow mouth and a high red collar. The next day, I brought that in and did the first actual drawing of Zurg for approval. When he saw it, Ash said, “That’s a really cool design, let’s see how big Buzz will be next to him,” so he sketched a drawing of Buzz and we were off to the races.

You mentioned “design theory,” what’s that?

The design theory is the visual keys that make up a character. For Zurg, I wanted him to represent all the different types of evil bad guys out there. To do that, I broke him up into three sections. From the waist down, he has the flowing robes of Emperor Ming from Flash Gordon. The chest plate is from Doctor Doom and for the head, I’d just watched The Man Who Would Be King, and there were these tiki heads in there, so I gave Zurg a pointed tiki head with jagged teeth and big Wagnerian horns.

I knew the design for Zurg would change later, but everyone liked it — we even used it for our crew shirt! It also worked well for the storyboards. Some of my favorite storyboards I did were from the Zurg versus Buzz fight that was going to take place in Al’s Toy Barn. Later on, that fight got changed to Buzz vs Buzz and the Zurg fight was moved to the opening.

How did Zurg change when he was adapted into 3D?

When it came time for the art department to start making Zurg, they said, “Let’s go with Kenny’s design.” They put me in with [artist] Randy Barrett, and he said, “This is probably what Buzz sees in his head when he thinks of Zurg — with the sharp teeth and the big horns — but we need to put Zurg into the Buzz Lightyear toy line.

Barrett didn’t change it much. He flattened the top of the head and the horns, making him more aerodynamic. Zurg’s face also had a line down the middle and there was a hatch on the right side of his face because, originally, there was a little guy that ran Zurg from inside, but Barrett got rid of all that because it was no longer a plot point. He also got rid of the jagged teeth and replaced them with the grill from Knight Rider. Finally, he gave Zurg these bulbous eyes that were modeled after the taillights on a Dodge Viper. He turned out so cool. Getting to see my design for Zurg realized in 3D was a real highlight during my time at Pixar. That and getting to voice Zurg in Disneyland.

You voiced Zurg in Disneyland?

Oh yeah! A few months later, John Lasseter came to my cubicle and he told me we were going to Burbank tomorrow. I asked, “Why?” and he told me, “You’re the guy who designed Zurg, you’re the voice of Zurg in our scratch reels, so we’re going to do ride approval for Buzz Lightyear Space Ranger Spin,” which was going to be a new Toy Story ride in Disneyland — which meant we’d check out the characters and make sure they were to scale and accurate to the designs and things like that.

We got on a plane the next day and, before I knew it, I’m standing in front of a huge sculpture of Zurg. It was gigantic! After checking it out, John said, “Let’s take a look at the ride,” and we checked out the model of the ride and gave them notes on it. A couple of weeks later, I went back down to record the voice for Zurg on the ride. Even now, when a friend tells me they’re going to Disneyland, I always tell them to go on Space Ranger Spin and go shoot the hell out of me.

I didn’t do the voice of Zurg for the movie though, that was Andrew Stanton. I talked to him about it once and he told me that John wanted him to do it since he’d come up with the name for the character. He seemed almost a little apologetic about it, but I told him, “Hey, dude, It’s cool. I’m like Paul Frees and The Haunted Mansion. I’m in the park — it doesn’t get any better than that!”

Finally, what did you think of Zurg’s redesign for Lightyear?

Oh, I love it. Angus MacLane was with us back on Toy Story 2 and I was so happy for him when I heard he was directing Lightyear. He’s so great and I really do like his take on Zurg. Zurg is huge, and he is a bit different, but he’s still purple, he’s got the same head, he’s still got the horns. He’s still Zurg, which I couldn’t be happier about.