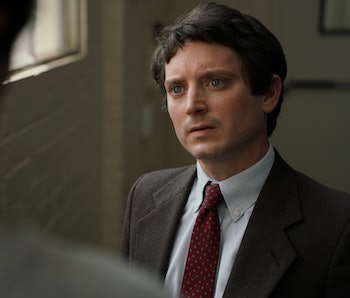 His latest movie is No Man of God, which tells the intensely intimate true story of serial killer Ted Bundy’s (Luke Kirby) final days in prison and the unlikely friendship that formed between him and young FBI analyst Bill Hagmaier (Wood). The release first hit the Tribeca Film Festival earlier this year and will premiere in theaters and on-demand platforms on Friday, August 27. Aside from starring, Wood also produces the movie.

“I'd be amazed that I produced a movie,” Woods tells Inverse, speculating how his younger self would react to his new project. “Secondly, I think I would just be amazed that I was in a movie about Ted Bundy. I would be sort of fascinated by that.”

The Lord of the Rings alumni has made some intriguing career decisions since bringing Frodo Baggins to life on the big screen nearly two decades ago. His passion for storytelling has led him to play some interesting characters over the years — from Ryan in FX’s quirky series Wilfred to Frank Zito in the 2012 remake of horror classic Maniac — and co-founding the indie production company SpectreVision (the studio behind cult hits Mandy, Daniel Isn’t Real, and more).

To promote the release of No Man of God, Wood spoke with Inverse about all the things that make him tick — from his first memory of the internet (shout out to Palace Chat) to early career successes, his enduring fascination with serial killers, and an undying love of Smashing Pumpkins and Radiohead.

I had a lot of energy as a kid, which I think is partially why my mom thought it would be fun for me to do commercials when I was five years old. I was, I guess, precocious.

You know, I worked in an industry with a lot of adults. So at the same time, I was also expected to be responsible and go to work and know my lines and sort of work amongst adults. But yeah, just a lot of energy; I was always climbing on things. My mom called me monkey because I was always climbing.

What was your favorite band when you were 15 years old?

I did homeschooling predominantly through high school because I was traveling so much. My schooling was actually through a correspondence school based out of Ohio, but I never attended actual classes. They were, like, virtual, but in the early days of that.

What was the one item of clothing that I wore all the time? I would probably say there was this brown beanie that was, I think, cotton. And I wore that a lot. Embarrassingly. I would not wear that today. But that was a big thing for me when I was in my early teens.

AOL. And you know another thing that's just a funny memory? It's not my first, but it's in the internet's infancy. There was a thing called Palace Chat. Do you remember that? It was the early days of there being sort of a 3D environment that wasn't actually 3D. It was just like photographs as the backgrounds and then you would see avatars of other users on the screen. So you could walk up — I mean click up — to a person and chat with them. You could create an avatar that looked like whatever you wanted it to look like.

You can look up images of it. It was kind of funny. I mean, it was probably used for all sorts of nefarious things. And at the time, probably tons of adult conversations that kids probably shouldn't be engaged in. But I remember that well.

I remember loving looking at photos and you download a photo and it would take ages to actually render on your screen because you're only dial-up on like a 36k modem. I'm so grateful that we came from that era that we know where it all started. You know, I don't necessarily envy people who were born now. Because they have no context and don’t know where everything came from. I just love having that perspective.

What is a truth about love you believed when you were 15 years old?

I was very much a hopeless romantic. And I still am. I think I hold on to a lot of those same ideals.

I was also, concurrently, a big music fan. Music and romantic songs and feeling the feelings was a big thing about being a teenager. And so I connected that with my first girlfriend when I was 15. It was such puppy love, man. It was just pure, teenage-like, and blissed-out. I don't think the essence of that ever really left me, which I suppose is a good thing. I never got jaded.

The first role that I had in a film of any substance was in a movie called Avalon. I was eight years old. I love that film, too. It's one of my favorites of Barry Levinson's. I'd previously been in a bunch of commercials. And then I had two tiny roles in films prior to that. But Avalon was the first film that I actually had a role in that felt real. It wasn't just a couple of days on something; my mom and I were out in Baltimore on location. That was kind of a game-changer.

Wow. Great question. Maybe in hindsight, it's more obvious. I was going to say Flipper, but Flipper, sort of, wasn't a failure. People saw that movie.

There is a movie from the early 2000s. It was called Chain of Fools. I had a really fun time making it. It was originally called Shiny New Enemies and it was directed by this great Swedish duo who was known as a company called Tractor. They had done music videos. The cast is insane. I mean, it's um, Jeff Goldblum is in it. Salma Hayek, Kevin Corrigan, Tom Wilkinson, David Hyde Pierce, Steve Zahn, Michael Rappaport ... We shot up in Vancouver and we had a really incredible time making it. (The first time I ever did acid in my life actually was on the streets of Vancouver.)

But when that film came, it didn't really make an impact. And it was just one of those funny things. The aspirations for it, the fun of making it, the enthusiasm we all had for the script (which was so good) just didn't work.

It just goes to show that you don't control the process. It wasn't the director’s fault. It just happened. I look back on that not with any kind of regret because the experience of making it was so much fun. And the team that I got to play with was so rad.

What is your can't-miss prediction for the year 2030 and why?

I'd love to say the singularity, although I don't know that we're quite there yet. Getting close. I'll just say Radiohead will have released another record by then.

Oh, I think he'd be really fascinated. I think my 15-year-old self certainly knew who Ted Bundy was. When I got a little bit older, I took more of an active fascination with serial killers. I actually had a Time-Life book when I was 16 or 17 called Serial Killers that was like a little mini encyclopedia.