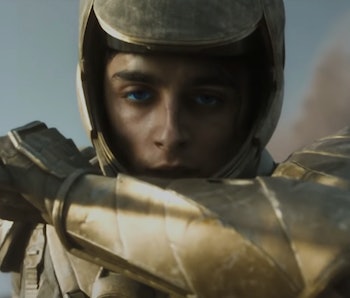 Paul Atreides has no problem bringing a crysknife to a lasgun fight. And for anyone who’s read Dune, the scene from Dune Part 1 where Paul fights like a demon in the Arrakis desert teases one of many huge battles to come during the story’s climax. Now, as Dune Part 2 officially begins filming, one sly Easter egg teases an even bigger fight on the horizon.

On July 18, 2022, the official Dune Twitter account posted a clapperboard with the words “PART TWO.” This means, essentially, that Dune Part 2 is on schedule. While some fans worried it would a take a long time for the sequel to happen, the success of the first film seemed to ensure that Part 2 would get rolling without incident.

Underneath “PART TWO” is text that reads “Long live the fighters!” While this might seem cryptic to a casual spice-head, this is taken straight from the novel. Interestingly though, these exact words aren’t spoken in the book, but rather explained in translation.

At the end of Dune Part 1, we see the very beginning of Paul and his mother Jessica’s induction into the ways of the Fremen. By the end of the novel, Paul becomes the leader of the Fremen and leads them into a huge battle — while riding sandworms — to defeat the Harkonnens. Paul and Stilgar rally their fighting forces together in a huge cavern, and Stilgar says, “Long live Duke Paul-Muad’Dib!”

Then, all the Fremen chant “Ya hya chouhada! Muad’Dib! Muad’Dib! Ya hya chouhada!” This is a Fedaykin phrase, which Jessica translates roughly to mean, “Long live the fighters!” In the glossary of Dune, we learn that the “fighters” are meant to represent an “extended now,” meaning they are “consecrated against a specific thing — that alone.”

So what might seem like an innocuous and perhaps even generic battle cry is actually quite nuanced, at least in the book. In the 1984 David Lynch film, Paul Atreides (Kyle MacLachlan) just yells “Long live the fighters!” to his gathered army. But it seems safe to assume that, in the upcoming Denis Villeneuve version of scene, this line will probably be spoken in the native Arrakis language, and it’s possible it won’t even be spoken by Paul (Timothée Chalamet) at all.

This means that “Long live the fighters” could end up as a unique Easter egg in Dune Part 2. If this scene remains true to the novel, production of Part 2 is already hinting at another thoughtful film.