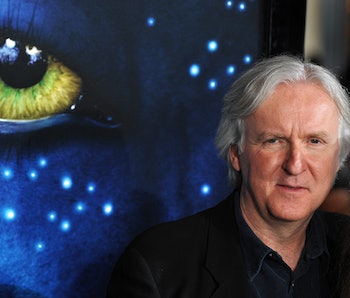 Feelings about Avatar are running high right now online. While James Cameron stans are scolding anyone online for “betting against” him, trolls are saying horrible things about him, while Cameron himself is telling trolls to “shut the f**k up” as though he’s a Britpop icon and it's still the 1990s. The King of the World is back, and it’s going to be a weird time to have an opinion about Avatar, so be careful out there!

With that in mind, let’s talk about Dune, and how all the special effects in the 2009 Avatar can’t make up for the fact that Cameron borrowed Frank Herbert’s plot, and also, perhaps, misunderstood it.

Spoilers for 2009’s Avatar ahead. No spoilers ahead for The Way of Water.

Even in 2009, it was obvious to many critics — even those who liked Avatar — that the film lacked originality in terms of its plot. While the Ferngully and Dances With Wolves comparisons are fairly rote now, the slightly more obvious plot structure Avatar borrowed was from Dune. In fact, most of the world-building of Avatar supports a general plot structure that is nearly identical to Dune. Here’s the big stuff.

The idea that the planet Pandora is a watery jungle planet almost scans as a Dune rip-off insofar as it's the easiest way to do the opposite of a desert planet. Instead of the Fremen riding Sandworms, the Na'vi ride Mountain Banshees, which again, simply swaps sand for the air and the ocean. Whereas author Frank Herbert was creative with naming planets, people, and objects in Dune (“Arrakis” comes from Arabic, and references the star Mu Draconis) James Cameron picked the name “Pandora” because of the extremely famous Greek myth of “Pandora’s Box,” which, even if you’ve never read, you already understand. And the less said about the on-the-nose naming of “unobtainium,” the better.

In fairness, the idea that Cameron likes Dune is not a secret. And, to his credit, in his long career in making science fiction movies, Cameron has a track record of researching and referencing classic science fiction novels, short stories, and TV episodes to make his movies work. The closing credits of The Terminator (1984) contain the phrase “acknowledgment to the works of Harlan Ellison,” because Cameron famously (or infamously) joked about “ripping off” some of Ellison’s stories and Outer Limits plots. While filming Aliens (1986), Cameron instructed the cast to read the 1959 novel Starship Troopers in preparation for filming in order to give the Colonial Marines in that film a similar flavor found in Robert A. Heinlein’s prose.

The point is, you can say a lot about Cameron, and you don’t have to like his movies, and you can even bet against him, but his career has proven he is a big science fiction fan, and deeply steeped in the history of the genre.

And it’s for this exact reason that it’s odd that the original 2009 Avatar seems to miss the point of being a Dune rip-off.

To be clear, there’s nothing wrong with the idea that Avatar is a bit of a Dune rip-off. Just like Cameron was smart to borrow elements from Ellison and Heinlein for The Terminator, and Aliens, respectively, borrowing ideas and plot structures from Frank Herbert is fine, too.

But, what Cameron missed about Dune — or chose not to do in Avatar — was that Herbert created a deeply introspective wrinkle within the “white savior” narrative. As some scholars have argued and as Herbert himself made clear in the first novel, and even clearer, in Dune Messiah, is that there’s something deeply corrupt and toxic about these outside saviors “going native.” In Dune and Dune Messiah, Paul Atreides lives to see himself become the villain, rather than the savior of the Fremen. Dune is brilliant because it pits two ideas against each other: Paul is right to rally the Fremen against the Harkonnens, but also, there’s a terrible outcome of this that becomes another form of colonization. As Chani (Zendaya) says at the start of the 2021 Dune, “who will our next oppressors be?”

In Avatar, when Jake Sully unites the Na’vi tribes to fight against their oppressors, we’re not encouraged to think what he’s doing is complicated — ethically, culturally, or philosophically. In Dune, Paul’s status as “Lisan al Gaib,” or “voice from another world,” is treated with trepidation and ominous foreboding. In Avatar, Jake Sully being a voice from another world just scans as a guy who is in the right place at the right time. There’s no moral complexity at all. This isn’t to say Avatar needed to have moral complexity to be successful (it clearly didn’t) but it’s funny that in borrowing so much from Dune already, Cameron left this bit of introspection alone.

Perhaps The Way of Water will end up being like Dune Messiah — an analysis of what can go wrong with well-meaning colonialists replacing the bad colonialists, only to construct an even worse system. Then again, maybe the Avatar saga isn’t like Dune at all. The Na’vi have a bunch of water, not sand. And perhaps, that superficial difference reveals the ultimate truth of Avatar’s relationship with Dune. In 2009, Avatar paid homage to the plot of Dune but, tellingly, didn’t bother to steal its soul.

More like this
Entertainment
Jan. 31, 2023
Dune 2 Will Be Hilarious, Says Actor Whose Character Killed His Own Dad
By Ryan Britt
Culture
Feb. 3, 2023
Signs is Remembered as M. Night Shyamalan’s Alien Movie, but it Has a Human Heart
By Mónica Marie Zorrilla
Entertainment
Jan. 30, 2023
In Infinity Pool, Brandon Cronenberg Puts Alexander Skarsgärd Through Hell
By Isaac Feldberg
LEARN SOMETHING NEW EVERY DAY.
Related Tags
Share: