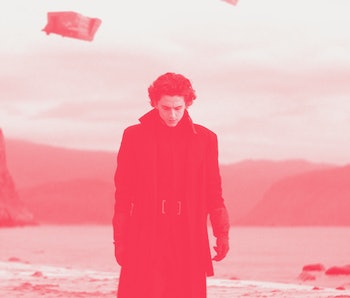 By the end of 2020, there's a good chance that everyone's favorite science fiction hero will instantly be Paul Atreides, the man who brings unity to the planet Arrakis in the epic story of Dune. At the end of 2020, Denis Villeneuve’s new cinematic adaptation of Dune will star Timothée Chalamet as Paul, the man who will become Muad'Dib. The first photo of Chalamet as Paul has been revealed, and it rocks. But, it also connects to the famous (or infamous) 1984 David Lynch version of Dune in three surprising ways.

Here's how the photo honors the beginning of the original Frank Herbert Dune novel, why that connects to Lynch's version, and how all of this could give us an indication for the overall scope and feeling of Villeneuve’s vision for Dune. Speculation ahead.

Paul is not standing on the planet Dune

First off, this first image from the new Dune does not depict the planet Arrakis, better known as "Dune." Instead, as Vanity Fair confirmed, Paul is very clearly standing on the more watery and lush planet of Caladan, which is where his family is actually from. As Vanity Fair's Anthony Brezincan writes: "In the shot above, the transport ships descend to take the Atreides leadership to their new destination."

At the very start of Frank Herbert's book, Paul is a week away from leaving from Caladan to join his family on Arrakis. His father, Duke Leto Atreides, is basically reallocating his seat of power from Caladan to Dune in order to settle a complicated trade dispute over a substance known as "Spice." (Yes, all versions of Dune, like The Phantom Menace, focus on interstellar trade disputes.) Once Paul arrives, things become a little more exciting, but this shot is likely from the very beginning of the film. That checks with the Lynch version, too, since that film also made sure we understood the journey of Paul's family from Caladan to Arrakis. Bottom line: You can't do Dune right if you don't start on Caladan first.

Regardless of what you might think of the 1984 David Lynch-directed version of Dune, the movie was a huge milestone for science fiction cinema. While cast reads like greatest hits collection of famous sci-fi actors — from Patrick Stewart to Sean Young to Max von Sydow — the real achievement the movie was its unique and lasting visual aesthetics. While traversing the treacherous environment, people need to wear "stillsuits" to keep their bodies from dehydrating. In Lynch's Dune, this meant the now-iconic, all-black leathery jumpsuits. While this look is a pretty big departure from the book, the outright awesomeness of these stillsuits is hard to remove from our conception of what Dune is supposed to look like.

In the 2000 Sci-Fi Channel miniseries of Dune, a more realistic version of the stillsuit was created, but it wasn't one anyone really liked. Chalamet's outfit isn't a stillsuit because he's not on Arrakis yet, though its certainly reminiscent of Kyle MacLachlan's Paul.

There's no reason to assume the new stillsuits will look anything like Lynch's, but it seems like Villeneuve is determined to give us a brooding, all-black look at some point in the film.

In the Lynch film, Paul and his family get off of Caladan pretty quickly, but in the book, you're easily 70 pages in before we start really getting over to Arrakis. If we're expecting the new Dune (s) to be as epic as Villeneuve’s other films, there's a good bet that we could spend at least the first third of the new film on the planet Caladan. Obviously, this is something Lynch (or Jodorowsky) never intended to do: make Dune into a series of films.

In the Lynch film and the Herbert novel, a lot of cool stuff happens on Caladan, including the introduction of the human-machines known as the Mentats, the concept of the Spice trade disputes, the order the Bene Gesserit, and, of course, the introduction of Paul's combat training. This means that if the new Dune follows the book (which it certainly looks like it will) we could spend a lot of the first film without ever even setting foot on the planet which makes the story famous. If Villeneuve decides to give us a well-paced version of Paul's backstory on Caladan, you could imagine a version of Dune where his family doesn't even arrive on the planet until like 30 minutes to an hour before the first movie ends. You could call it a cliffhanger, but really, that would be more like a dune-hanger, right?