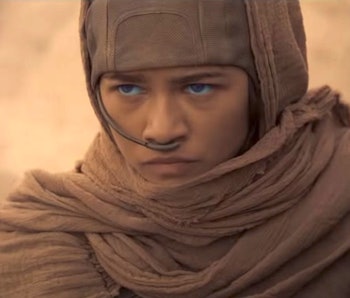 Chani is coming for your spice. In Dune: Part 2, Zendaya’s Fremen warrior will have an even bigger role than she did in Part 1. According to a new quote from Timothée Chalamet, there will be a “greater abundance” of Chani in this movie.

Here’s why that honors Frank Herbert’s first Dune novel and could finally give Chani her due in a Dune movie. Warning: Spoilers ahead for the 1965 novel, Dune.

During his press tour for his new film, Bones and All, Timothée Chalamet has naturally gotten a few questions about the highly anticipated Dune: Part 2, which hits on November 3, 2023. Speaking to Variety, Chalamet indicated that Zendaya hadn’t “wrapped yet,” and that she was still filming scenes for the upcoming epic.

“It’s amazing,” Chalamet said. “She’s bringing exactly what she brought to the first one — which was incredible — but in greater abundance. And she’s really become a sister. I’m so grateful to count her as a partner and a sister and a friend.”

Fans of the book may be able to guess what scenes Zendaya would be filming without Chalamet. In the last third of the 1965 novel, Paul and Chani have a son together, although this baby, sadly, does not survive the story of the first Dune. That said, Paul and Chani have more kids in the book sequel Dune Messiah (1969), which Denis Villeneuve has said he hopes to adapt as the conclusion of a Dune trilogy (two movies for the first book, one for the second). So not only is Chani a huge part of the first novel but she’s also pivotal in the second book, which could become Dune: Part 3.

Although Chani appears in Paul’s future visions in the book, the character doesn’t show up in person until about midway through. In the 1984 David Lynch version of Dune, Chani was played by Sean Young, and, as in the novel, appears in Paul’s dreams briefly, but doesn’t arrive in the story until well over halfway through the film. Sticking to this plot structure might have respected the structure of the book, but it doesn’t work in a movie version of Dune, ever.

Smartly, Villeneuve already fixed this by having Chani narrate the opening of Dune: Part 1. In a change from the novel and previous movie versions, Chani delivers the voiceover that sets the stage for the story of Dune, rather than Princess Irulan, who will be played by Florence Pugh in Dune: Part 2.

Essentially, thanks to the Chani-centric opening, Dune: Part 1 grounded the story in the perspective of the Fremen. Instead of the aristocracy looking in, the Fremen are looking out. From the Fremen point of view, all “great houses” of the Empire are oppressive, including House Atreides. Although Chani doesn’t know she’s destined to become a co-ruler of the Empire with Paul, Villeneuve wisely centered her in the narrative in a way even the novel doesn’t quite pull off.

While some adaptations have treated Chani as simply the mother of Paul’s children, her role in the overall story of Dune is way bigger. In the SyFy Channel miniseries, Frank Herbert’s Dune (2000) and Children of Dune (2003) — in which Chani was played by Barbora Kodetová — Chani is obviously given the most screentime of any filmed version of the story. And yet, even in those slightly underrated versions, Chani still doesn’t seem like an equal partner to Paul.

But in the book, Chani is the only reason Paul is able to lead the Fremen. Yes, Stilgar has Paul’s back, and it helps that Paul’s mother, Jessica, becomes the Reverend Mother for the Fremen. But, Chani is the confluence of all of it: She’s both a Fremen warrior and eventually, a leader of the entire universe. Although Paul marries Princess Irulan for political convenience, he rules the galaxy with Chani after the end of Dune.

This fact isn’t entirely a good thing either. Both Chani and Paul make some big mistakes when it comes to lording over a galactic empire. And it’s in all of that chaos that the story of Chani is fascinating. Zendaya’s expanded role in Dune: Part 2 isn’t just great in terms of seeing all of this material faithfully adapted, it's essential to getting Dune right.

More like this
Entertainment
November 13, 2022
Dune 2 leak could reveal the most important location in the book
By Ryan Britt
Entertainment
November 24, 2022
The Peripheral Episode 7 release date, time, plot, cast and trailer for Amazon’s sci-fi series
By Jeff Spry
Culture
November 24, 2022
One of A24’s least-seen movies is also one of its most intriguing
By Dais Johnston
Related Tags
Share: