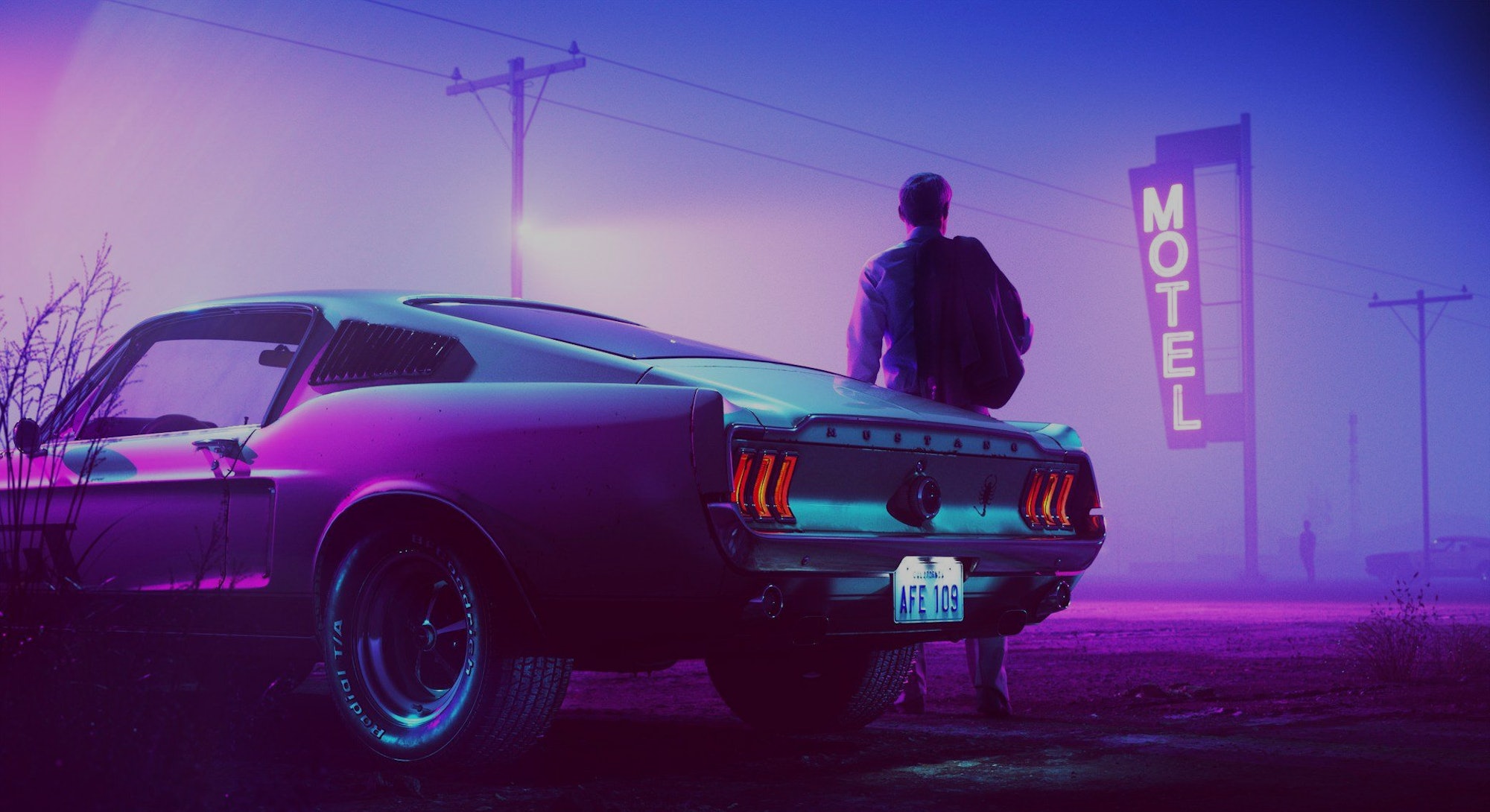 In 2011, one movie made us rethink everything we knew about cars, cinema, and Ryan Gosling.

The neo-noir masterpiece Drive, starring Gosling and directed by Nicolas Winding Refn, was released on September 16, 2011. 10 years later, it remains the only fairytale gangster film Hollywood has ever come across. But more than five years in the making, Drive only happened thanks to a bizarre confluence of events that included Harrison Ford, flu medicine, and REO Speedwagon.

Drive is the story of Driver, a Hollywood stunt driver by day and a getaway driver by night who falls in love with his neighbor Irene (Carey Mulligan) and becomes entangled in a plot involving her criminal husband Standard (Oscar Issac). But the engine that propels Drive is the purity of the relationship between Gosling and Refn.

“I just knew he was the one,” Gosling told The New York Times in May 2011 at the movie’s Cannes Film Festival premiere. The film’s theatrical release came four months later on September 16.

As Refn starts to elaborate on the beginning of their love affair, Ryan interjects, “I always get nervous at this point because I’m pretty sure this is when he says he penetrated me cinematically, or I creatively lost my virginity to him, or that we made a movie baby in the backseat of my car.”

That’s just one of the countless anecdotes from Drive. So to celebrate the film’s 10-year-anniversary, we’ve scoured the internet for 15 of the most fascinating little-known facts about arguably the greatest neo-noir thriller of the 21st century.

15. Nicolas Winding Refn, who is best known for his Pusher trilogy, actually came to Hollywood for a different movie called Dying of the Light. Attached to the project at the time was Harrison Ford (later replaced by Nicolas Cage), who’s character wasn’t going to survive to the end of this film. Excited about the thought of being a Scandinavian director who comes to Hollywood and murders Ford, Refn agreed to direct the film. However, on his way to Los Angeles, he caught the flu. Ford, who picked him up from the airport, took him to the pharmacy.

14. On this same visit to Hollywood, a meeting was arranged with Ryan Gosling at a restaurant. Strung out on heavy flu medication and barely able to drag himself out of his bed, Refn arrived 20 minutes late.

Refn and Gosling both describe the meeting as dry and disappointing. While Ryan tried to make conversation, Refn seemed disinterested on account of being ill. He was too attached to the idea of cinematically murdering Ford (even though Ford wasn’t sold on the idea).

13. Refn, the director of Drive, cannot drive in real life and failed his driving exam eight times. Feeling too cheap to get a taxi, he asked a reluctant Gosling to drive him back to the hotel after their meeting. In 2011, Gosling told NYTimes, “I’m stuck with him for another hour driving out to Santa Monica, and he won’t talk to me so I turn on the radio to quiet the silence and REO Speedwagon’s ‘Can’t Fight This Feeling’ comes on.” Euphoric and high from the medication, Refn turned the volume up and started to sing along, and started to cry.

The thought of leaving his family behind in Copenhagen just after having a second child, and pursuing a movie Ford wasn’t interested in, he suddenly had an epiphany. He turned to Gosling, and screamed- “We’re going to make a movie about a man who drives around in a car, listening to pop music because that is his emotional release!” and Gosling just turned towards Refn and said, “I’m in.”

12. The basic DNA of Drive is inspired from the fairytales of The Grimm Brothers. Refn started reading the Grimm fairy tales to his daughter, he noticed that although the tales were oversimplified, they were still complex; minimalistic but emotionally precise. That became the structure and tone of Drive, much like a fairytale, the structure of Drive consists of a good guy (a knight or a prince or a driver), an innocent woman in need of protection, and a bad guy (a wicked king or an evil witch).

11. The script of Drive is based on the novel of the same name written by James Sallis. Universal Studios bought the book years earlier but wanted to adapt it into a franchise like Fast And Furious. This proved to be a challenge for screenwriter Hossein Amini since the novel is a hundred-page existential ride written in a non-linear structure. Drive didn’t adapt well to high-stakes action, and so the film never got made until Refn entered the scene.

10. Refn decided to stay true to the novel and rewrote the script with Amini with a more simplistic structure and minimalist dialogue. The film removes even more detail from the already-slim novel, especially when it comes to the backstory of Ryan Gosling’s Driver. In the book, we learn Driver’s father was a burglar, that he watched his mom murder his dad in a fit of rage, and that he was sent to a foster home only to steal his foster parents’ car at 16 and run away. None of this is in the movie.

9. The film also made a few changes from the novel to suit Refn’s hyper-realist style. The character of Irene is more pivotal to Driver’s arc in the film than in the novel. In the book, Irene is an extroverted Latina woman, while Irene in the film has a more grounded energy that draws Driver in.

8. Carey Mulligan was cast in the film despite not being a Latina because Refn saw in her the innocence he wanted Driver to see in Irene. The minute Mulligan walked into Refn's house to meet him, Refn looked at Carey and said, “you’re it!”

7. Standard’s character played by Oscar Issac in the film is also different from the novel. While in the novel, Standard is a career criminal who’s constantly in and out of jail, in the film he’s made a few unlucky decisions that he regrets and is trying to make up for. Even though, as audience members we still root for Irene and Driver, this version of Standard makes it trickier to dislike him. The complexity that Oscar Isaac brings to such a small character is as a result of the collaborative nature of Refn’s direction. In a featurette, Oscar Isaac talks about the freedom given by Refn while working on a scene, he would often ask Isaac questions like, “If the scene could be anything it could be, what would it be?”

6. Bryan Cranston, who had a lot of opportunities thanks to the success of Breaking Bad, was “sitting with a blank piece of paper” writing out the pros and cons of playing the character of Shannon in the film. At that moment, he received a call from Refn and took it as a sign to do Drive.

5. Cranston has also talked about the freedom Refn gives his actors. In an interview with YouTube channel HitFix, Cranston revealed that before shooting began, the director asked each cast member to pitch him ideas on their character. Cranston decided to make Shannon a “motor-mouth” to compliment Ryan Gosling’s man of few words.

4. Eighty percent of Drive was shot chronologically to allow for the emotional depth of the characters to come through. While all of Refn’s previous movies were shot in a 100 percent chronological order, this wasn’t possible for Drive because of budgetary issues. However, the shooting schedule still maintained the emotional chronology of the film, meaning that nobody’s character passed away in the beginning or middle of their schedule.

3. The iconic head thrashing scene in the elevator was greatly influenced by Argentinian filmmaker Gasper Noé. Before shooting the scene, Refn called up the king of head smashing himself, Noé, and asked him how he had approached the controversial scene for Irreversible. Despite the advice, Refn admitted that his scene is not as good, but he’s expressed content with the kiss in the elevator.

2. The film is a dedication to one of Refn’s favorite directors, the Mexican cult filmmaker known for El Topo, Alejandro Jodorowsky.

1. The experience of making the film was not too different from the actual film itself. “The movie became the essence of the experience making it,” Gosling told The New York Times. Many of the cast and crew members moved in with Refn throughout production, including Hossein Amini, Carey Mulligan, and editor Matt Newman. Ron Perlman and Albert Brooks (who played Nino and Bernie, respectively) would smoke cigars and joke around.

In another Cannes interview, the cast and crew said they would shoot the movie and then come and edit, watch movies, or go for a drive and listen to music.

Just like Refn and Gosling on that fateful Hollywood car ride.