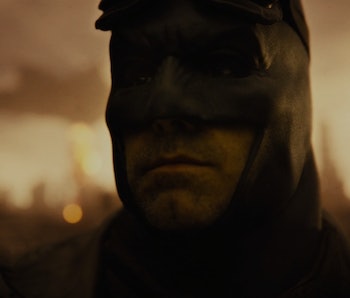 Unlike The Flash, none of us can time travel into the future of the DC Universe. However, Reddit is always a place to guess about the future, even if the sources there aren’t always reliable.

A new batch of “leaks” from the DC Extended Universe should have fans excited, even if there’s no way of proving a single word of them. They are, if nothing else, a lot of fun to talk about.

What Happened? — On February 21 in the Reddit forum r/DCspoilers, user u/Jet-Jules849 translated seven tidbits from Box Office Mexico about the supposed future of the DCEU.

The info mainly involves cameo appearances and the status quo of the DCEU’s Justice League roster. One claim, however, alludes to the return of Zack Snyder for a new DC project.

Here’s a breakdown of the seven leaks.

Lasso of Hestia — After reading all that, I don’t blame you for not believing a word of it. So much of it sounds too good to be true, especially the claim about Zack Snyder’s miniseries (Although Snyder has quietly teased something over the last few months).

What casts doubt on u/Jet-Jules849’s leaks is that they are allegedly also sourced from a second outlet that isn’t named. You can’t believe everything on the internet, especially when the root of the info is opaque.

Furthermore, u/Jet-Jules849 insists that actors sharing geotagged Instagram posts are proof. But are they? London is a major hub for all kinds of film and TV productions. Just because actors are in London at the same time a DC movie is being filmed, that doesn’t automatically mean they’re involved.

Some additional “proof” also don’t make sense. For example, the leaks claim Cavill flying to the U.S. in the summer of 2021 is proof he’s involved with The Flash. But Cavill lives in London, and production for The Flash took place in the UK. Why would Cavill need to fly to the U.S. to work on a British production?

I’d love for all these rumors to be true, but without confirmed sources it’s important to be skeptical.

The Inverse Analysis — As fun as these leaks sound, it’s inadvisable to put too much stock in them until trustworthy outlets can weigh in. Feel free to have fun imagining these leaks as possibilities. Just don’t get mad when you’re watching The Flash and Henry Cavill isn’t in it.

More like this
Entertainment
Feb. 1, 2023
DC’s New Secret Weapon is Director-Driven "Elseworlds" Movies
By Eric Francisco
Entertainment
Jan. 26, 2023
Shazam! Fury of the Gods trailer pits the family against Helen Mirren and her dragon
By Mónica Marie Zorrilla
Entertainment
16 hours ago
Superman: Legacy Will Reinvent the Man of Steel — Everything to Know
By Eric Francisco
LEARN SOMETHING NEW EVERY DAY.
Related Tags
Share: