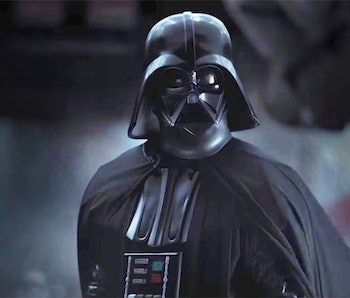 Did Darth Vader’s friends ever slip-up and call him Anakin? Did Grand Moff Tarkin actually know that Anakin Skywalker and Darth Vader were the same person?

Star Wars canon has lightly dipped into Tarkin’s role during the rise of the Empire. But now, with the famous Grand Moff confirmed for a role in Star Wars: The Bad Batch, one nagging question about Darth Vader’s story might finally be answered. That’s right: Tarkin’s Bad Batch future may mean more Vader on the way as well. Here’s why.

The exact timing of The Bad Batch is during an utterly fascinating part of the Star Wars timeline — literally right after Order 66 and just as the Empire is starting to truly rise. And as a result, we’re about to spend more time with Grand Moff Tarkin — and, potentially, Darth Vader as a result.

Before we talk about Vader, let’s talk Tarkin. With the very notable exception of James Luceno’s 2014 novel Tarkin, we simply don’t have a lot of real canon about the infamous Grand Moff.

His full name is Wilhuff Tarkin and in the expanded universe books, he was partners with Admiral Daala, and even had a miniature Death Star prototype stashed away in a secret Black Hole lab called The Maw Installation. Although that stuff from Kevin J. Anderson’s Jedi Quest doesn’t count as canon anymore, it will be interesting to see if the Tarkin in The Bad Batch is already working on Death Star stuff with Krennic.

In 2016, a Rogue One prequel novel called Catalyst attempted to reconcile the Attack of the Clones Death Star plans with Tarkin and Krennic’s role in the creation of the battle station later. In Tarkin, we see the man himself teamed up with Darth Vader around 14 BBY — meaning, about five years after the end of the Clone Wars.

That novel heavily implies that Tarkin thought Darth Vader was Anakin, but stops short of confirming it.

Even though the novel Tarkin gave us a good deal of Wilhuff and Vader’s working relationship, it doesn’t actually establish what either of them we’re doing during the Empire’s first year.

Presumably, because Tarkin is all The Bad Batch trailers, that means we could get a much-earlier meeting between Vader and Tarkin than anything we got in other comics, or the novel Tarkin. Now, comic book canon has already explored Darth Vader’s “Year One,” but that doesn’t mean the Dark Lord couldn’t cross paths with Tarkin in Bad Batch.

In fact, imagining The Bad Batch without Darth Vader actually starts to feel borderline bizarre. While a lot of books and comics have unpacked this, we’ve still never seen anything on screen canon, showing Vader settling into his new job as Evil Personal Assitant for Sheev Palpatine. The closest thing we got to this was the coda of The Clone Wars, in which Vader finds one of Ahsoka’s lightsabers while searching for escaped Jedi post-Order 66.

Outside of the comics and the novels, the only glimpses we have of Vader are at the end of Revenge of the Sith, that one scene in The Clone Wars, a handful of episodes of Rebels, Rogue One, and then the films everyone is familiar with. From a chronological perspective, that means there’s still a lot of Vader canon missing.

Having a Marvel comic series show what Vader was doing during his first year as Vader is one thing. But having Vader show up on one of the animated shows, during his first year as Vader is something else. By the time of A New Hope, Tarkin and Vader are used to working together, and Tarkin even gives Vader a backhanded compliment about the Jedi saying:

“You, my friend, are all that’s left of their religion.”

So ... Tarkin and Vader were friends?

It could just be a figure of speech, but, were they, maybe, actually friends? Because if you’re going to bother to bring back Tarkin for a show about rogue Clones, you should probably bring back his BFF, too.