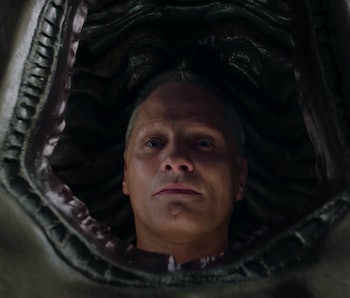 David Cronenberg is back. The famed director responsible for sci-fi horror classics like The Fly, Scanners, and Videodrome, as well as thrillers like Eastern Promises, Crash, and A History of Violence, is returning to the director’s chair this year with Crimes of the Future. The new sci-fi film will be the first that Cronenberg has directed since 2014’s Maps to the Stars, and will see him reuniting with one of his frequent collaborators in Viggo Mortensen.

In anticipation of the film’s premiere at this year’s Cannes Film Festival, Neon released a brief teaser trailer for Crimes of the Future. It packs quite a disturbing punch, despite running only 56 seconds long.

A Long-Awaited Return — According to its official synopsis, Crimes of the Future takes place in a society where humanity has begun adapting to a “synthetic environment,” one in which their bodies are allowed to undergo new “transformations and mutations.” The film centers on Mortensen’s Saul Tenser, a celebrity performance artist who, with the help of his partner Caprice (Léa Seydoux), puts on public performances dedicated to showing off the “metamorphosis of his organs.”

Along for the ride is Timlin (Kristen Stewart), a government investigator from the National Organ Registry whose obsession with investigating Saul and Caprice results in the discovery of a mysterious group hellbent on using Saul’s fame to “shed light on the next phase of human evolution.”

Of course, the first teaser trailer for Crimes of the Future doesn’t tell you much about the film’s plot, characters, or setting. Instead, it packs in a number of mystifying and straight-up disturbing images, which makes the film look like it will be Cronenberg’s long-awaited return to the body horror sci-fi genre that he’s so well-versed in.

But don’t just take our word for it. Here are eight of the most disturbing images from the first teaser for Crimes of the Future:

8. A Surgery in Progress

Knowing Cronenberg, the odds are high we’re going to see the entirety of this surgery(?) play out on-screen, which is what makes this otherwise tame image so unsettling.

No one knows how to nail sci-fi horror quite as well as David Cronenberg, and this image sells the mood of the film’s dark, grimy future.

Simply put: This is the stuff of nightmares.

Do we even want to know what this child is eating?

4. It’s Probably not a Futuristic Stapler

We can only imagine what this device is used for.

At first, this image of Kristen Stewart’s Timlin isn’t unsettling, but that changes once you see what she’s examining...

That shot of Kristen Stewart seems more disturbing now, doesn’t it? This one image should erase any doubt Cronenberg’s fans may have had about Crimes of the Future’s rumored body horror elements.

Again, we can only imagine what Viggo Mortensen’s Saul Tenser might be doing to himself in this scene.

The Inverse Analysis — With Crimes of the Future set to hit theaters this summer, fans of David Cronenberg’s work won’t have to wait long to find out if his new film really is as unsettling, intense, and disturbing as this teaser makes it out to be. Given Cronenberg’s track record in the sci-fi genre, it seems more likely than not that Crimes of the Future will end up being one of this year’s most memorable films.

Crimes of the Future will hit theaters in June.