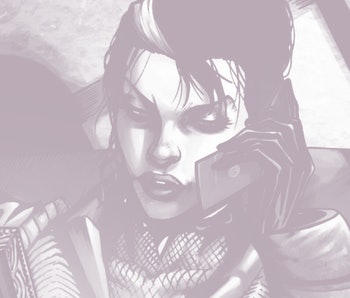 Few people have gotten in such close contact with trouble as Nick Fury, Agent of S.H.I.E.L.D. And for Fury, that trouble has come in many forms, from alien invasions to HYDRA to fallen heroes. But most dangerous of all may be his bad romance with Contessa Valentina Allegra de Fontaine — or, more simply, Val.

Val, recently introduced in the Marvel Cinematic Universe via The Falcon and Winter Soldier, has quite the comic book history. While it remains to be seen if and how Julia Louis-Dreyfus’ character ties to Samuel L. Jackson’s Fury, she already seems to be forming a team of her own, an echo of Fury’s first appearance in Iron Man.

As two of Marvel Comics’ best super-spies, and as characters with a significant journey in the MCU ahead of them in the upcoming Disney+ series Secret Invasion — and surely plenty of secrets left to unravel — we can’t help but wonder how the two would fare against each other and which secrets might cut deepest. Inversus is just the stage to open old wounds. And leave some new ones as well.

Inversus is an Inverse series that pits the best of the best against each other from all corners of the superhero omniverse.

Val first appeared in Marvel Comics’ 1967 comic book Strange Tales #159, and most recently in the MCU in The Falcon and the Winter Soldier. During her appearances in the ‘60s and ‘70s, she served as Nick Fury’s partner in the field, and romantically off of it. As one of S.H.I.E.L.D.’s best agents, she was assigned to lead Femme Force, a female-led team that included Agent 13, aka Sharon Carter.

She disappeared in Marvel Comics for a long time, before returning in the guise of Madame Hydra. But that proved to be a ruse, as was her time with S.H.I.E.L.D. Really, Val was a Russian sleeper agent and a member of the organization Leviathan, and more recently J.A.N.U.S.

Much of Val’s true history remains a mystery, but her romance with Nick Fury was unfortunately all too real. It’s these more recent appearances that seem to inform Val’s presence in the MCU and her rumored role in the upcoming Black Widow.

Val has no superhuman powers but she’s an excellent hand-to-hand combatant, a skilled strategist, and a master marksman.

In the Blue Corner: Nick Fury

Nick Fury first appeared in Marvel Comics’ 1963 comic book Sgt. Fury and his Howling Commandos #1, and in the MCU in Iron Man. A WWII vet who fought alongside Captain America (in the comics) and was later recruited by the CIA, Fury eventually became S.H.I.E.L.D.’s top agent. His exploits allowed him to rise up the ladder and become director of S.H.I.E.L.D. through the agency’s numerous iterations.

Whether it’s the comics or the MCU, there isn’t a hero or villain that hasn’t tangled with Fury in some way. He’s the guy in the know and has probably forgotten more intel than most spies will ever know in the first place. Still, he has his weak spots, and Contessa is one of them. Though their relationship has been on and off again, he’ll always carry a torch for her, even if she’s no longer on the side of the angels.

Nick Fury has no powers but he a master martial artist, marksman, tactician, and strategist.

It’s after midnight, and two figures approach each other from opposite sides of the abandoned Hellicarrier. They’ve been here before. It’s their spot. Or it was. In the good old days before things turned south.

“Val,” Nick Fury says, lighting a cigar and illuminating his face in the dark, cavernous belly of the grounded airship.

She fires first. Nick ducks behind one of the computer stations seeking cover, shouting: “I can’t let you do this. Those inmates belong in the Raft, not parading around pretending to be superheroes.” Nick runs to the next station, firing as he does. He misses every shot, and he wonders if it’s intentional — if some part of him will always love this woman.

“Jealous, Nick? Afraid to see someone do your job better than you? Afraid you no longer have ‘Earth’s mightiest heroes’ in your back pocket?”

“No, just afraid of what you’ll do once you think they’re in yours.” Nick stands up from behind the bank of monitors and tosses his gun aside. “Let’s talk this out for old times sake.”

“The old times are over, Nick,” Val says and she fires two bullets into Nick’s chest. He crumples to the ground. Val walks over to check the body and is startled to find it’s a Life Model Decoy.

Three states away, Nick Fury, the real one — or at least that’s what he wants those around him to think — watches the monitor from a S.H.I.E.L.D. station. Now he knows that Val truly would’ve killed him had he actually been there. Now he knows she’s too dangerous to leave alive.

Nick flips a switch on the monitor and the LMD’s eyes start blinking red. It’ll blow in 20 seconds. Maybe Val will get out. Maybe she won’t. Nick walks away and thinks, sometimes it’s better not to know.

Nick Fury is the best spy to ever do it. He trained Val, but like any good master, he didn’t teach her everything he knows.

Plus, with S.H.I.E.L.D. at his disposal, Fury has access to tech, like LMDs, that Val wouldn’t, giving him the upper hand. Still, there’s no healing a broken heart, and if Val truly is gone then that’s a wound that won’t ever heal. Sometimes victory hurts in more ways than one.

The Inversus winner is… Nick Fury.

Falcon and Winter Soldier is streaming on Disney+ now.