“Does anyone else think it’s a little strange that all of this happened in a week?” 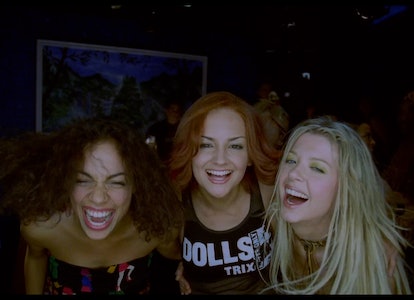 “Conform. Free will is overrated.” That may sound like a hidden message from the secret alien overlords in John Carpenter’s sci-fi classic They Live, but it’s actually part of the surprisingly similar plot of a 2001 comic book-based comedy full of colorful fashion and upbeat pop punk.

While The CW’s Riverdale has proved that Archie Comics characters can be suited to strange, dark storylines, writer-directors Deborah Kaplan and Harry Elfont offered their own clever, contemporary take on an Archie property over 15 years before Riverdale premiered.

Kaplan and Elfont’s Josie and the Pussycats is both an exuberant teen comedy and a biting satire of consumerist culture. That may have confused audiences in 2001, when the movie was a box-office failure that ended Kaplan and Elfont’s careers as feature directors. But it’s steadily built a cult following, and its portrayal of greed and cynicism in the music industry has, sadly, only increased in relevance. The specific cultural references and fashion choices may be rooted in 2001, but the message remains timeless.

It’s also a funny, joyous movie that tempers its cynicism with likable characters and an endearing focus on friendship. Rachael Leigh Cook, Rosario Dawson, and Tara Reid play members of a Riverdale rock band who have more enthusiasm than success. The opening credits are presented as a Josie and the Pussycats music video for the catchy song “3 Small Words,” which culminates in the reveal that the band is performing in a bowling alley where no one is paying attention.

DuJour’s plane crashes, but not before Wyatt ejects, landing in Riverdale and promising his Mega Records boss Fiona (Parker Posey) that he will find her a new band to immediately transform into massive pop stars.

Wyatt almost literally runs into Josie (Cook), Valerie (Dawson), and Melody (Reid) on the street as they’re leaving their latest failed gig, and it takes him only a few seconds to decide that they’ll be Mega Records’ latest superstars. He offers them a record contract without even hearing their music, and while Josie is slightly skeptical, the whole band is swept up in the glamor. That includes flamboyant manager Alexander Cabot II (Paulo Costanzo), his hanger-on sister Alexandra (Missi Pyle), and Josie’s best friend/secret crush Alan M. (Gabriel Mann), who all join the band on their journey to the big city.

One makeover montage later, and Josie and the Pussycats are already on giant billboards. They record an album, shoot music videos, appear on magazine covers, and rise to the top of the charts, all thanks to the orchestrations of Wyatt and Fiona. After the kind of rags-to-riches sequence that would take place over the course of months or years in a typical music biopic, Josie wonders, “Does anyone else think it’s a little strange that all of this happened in a week?”

Kaplan and Elfont fill nearly every scene with absurd, overwhelming product placement, locking the characters in an all-encompassing capitalist hellscape that to them (and us) is completely normal. Wyatt and Fiona are cartoonishly evil, but the system they work in is more insidious, infiltrating every aspect of daily life. Every few scenes all the background characters are dressed in a new dominant color, representing the latest fashion trend implanted directly into their subconscious.

But the sharp social commentary never overtakes the sweet, energetic story, and Cook, Dawson, and Reid have lovely chemistry as three best friends who just love playing music together. Josie and the Pussycats’ songs were written by an all-star team of pop-music artisans, including Kenneth “Babyface” Edmonds, Counting Crows’ Adam Duritz, The Go-Go’s’ Jane Wiedlin, and Fountains of Wayne’s Adam Schlesinger, with Kay Hanley of Letters to Cleo providing Josie’s vocals, and the soundtrack holds up well.

It’s easy to believe that Josie and the Pussycats could become international music sensations, even without the subliminal messages. If they were a real band, they would have made one of the best debut albums of the ’00s. Instead, they’re the stars of one of the decade’s most delightfully subversive movies.

Josie and the Pussycats is streaming for free on Peacock.

More like this
Culture
Feb. 1, 2023
If The Last of Us Made You Bawl Your Eyes Out, You Need to Revisit This Zombie Rom-Com
By Mónica Marie Zorrilla
Culture
Feb. 6, 2023
One of the First Movies Made During the 2010s’ Zombie Renaissance Was Also One of the Best
By Jon O'Brien
Culture
Feb. 2, 2023
After Harry Potter, Daniel Radcliffe Obviously Had to Play a Farting Corpse
By Alex Welch
LEARN SOMETHING NEW EVERY DAY.
Related Tags
Share: