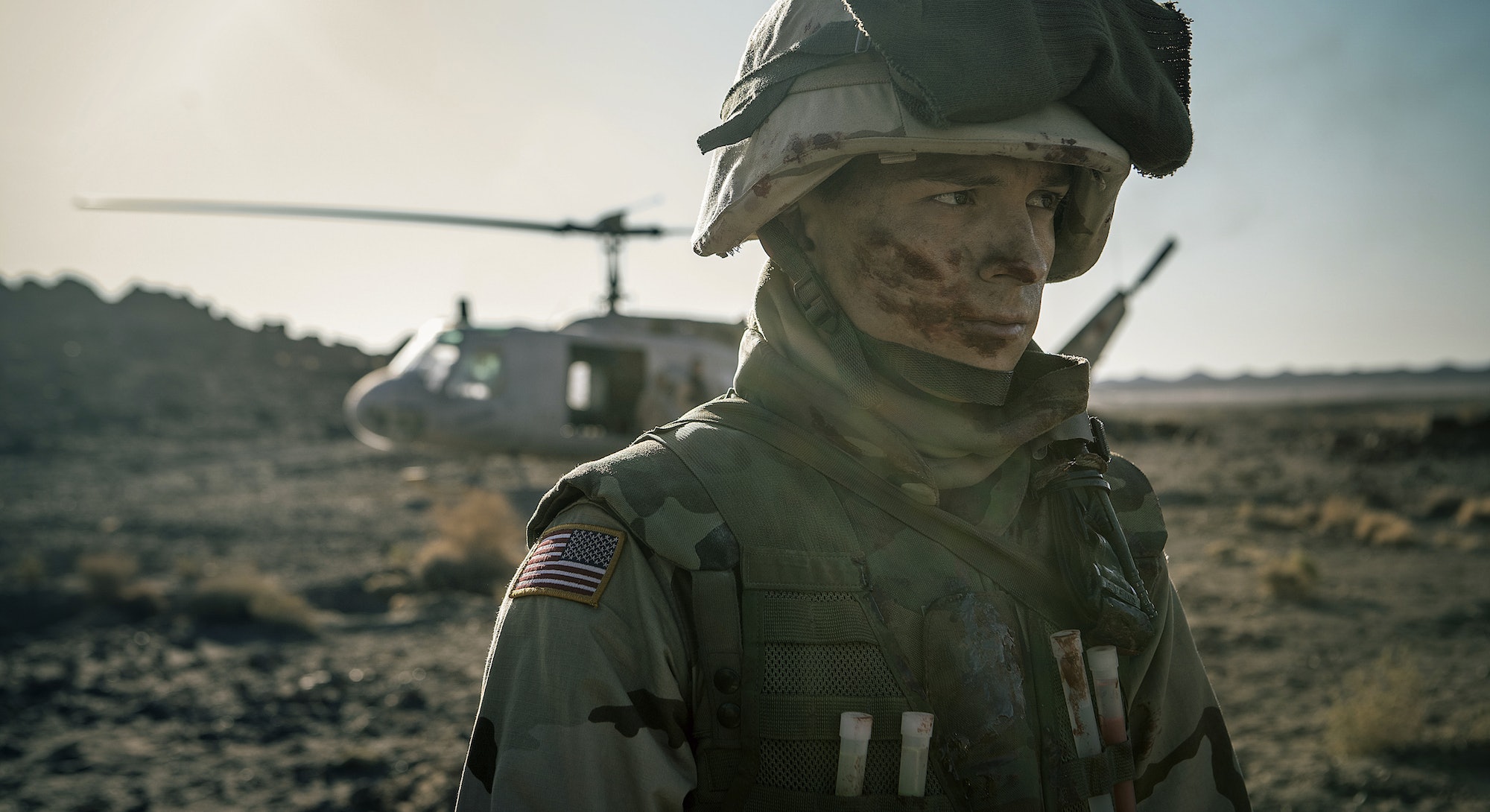 In a 2018 New York Times profile, Nico Walker — a U.S. Army medic turned convicted bank robber turned novelist — said he was in correspondence with one of his heroes, American writer Thomas McGuane.

"It's like a kid getting a letter from Spider-Man," Walker said.

Turns out, he was prophetic. Following a fierce bidding war waged by Hollywood studios while Walker was still serving an eleven-year sentence, his semi-autobiographical novel Cherry is now a gripping crime epic starring Spider-Man actor Tom Holland and directed by Anthony and Joe Russo (Avengers: Endgame). Their first non-Marvel movie since 2006's forgettable You, Me, & Dupree, Cherry is a thunderous roar by the Russos as visual artists. This sublime dadcore picture is only held back by its length and lack of commitment to a consistent comic tone.

In Cherry, streaming on Apple TV+ starting March 12, Holland transforms from superhero heartthrob into the hardened "Cherry," an aloof college student who meets a beautiful classmate, Emily (Ciara Bravo). Their whirlwind romance ends when Cherry enlists in the Army, where he is trained and deployed as a medic in the Middle East. Upon his return home to Cleveland, Cherry's post-traumatic stress disorder leads to a dangerous addiction to pills, alcohol, heroin, opioids — with poor Emily getting addicted, too. To maintain both their highs and pay off debt to their frat bro drug dealer, Cherry turns to serial bank robbery.

No longer burdened by the uniformed aesthetic the Marvel Cinematic Universe demands from filmmakers, the Russos let loose with expressionistic framing and gross textures. Rampant use of montage, repeating image patterns, fourth-wall-breaking exposition, and slow-motion catharsis (or a heroin high) compliment a sickening sense of violence. Bullets, mortars, and burned bodies haunt Cherry in his nightmares, not to mention waterfalls of sweat, vomit, and feces in a running shower that will haunt queasy viewers. Also: Needles. Far away from the MCU, the Russos reveal a palpable taste for grit and grime amidst a movie worthy of study for its technical merits.

Cherry is an arresting movie with only one glaring flaw. (Well, two, if your butt numbs at a two-hour-and-40-minute running time.) Its sense of humor, sharp as it is, is inconsistent. There are flashes of knee-slapping hilarity between long stretches of misery. There are some laughs to be had, from subtle visual gags (spot the stuffy banks with names like "Capitalist One") to laugh-out-loud moments, like the deafening silence of Cherry abandoned mid-robbery by a cowardly accomplice. The Russos have always been funny, evidenced by their TV sitcom work and key moments in their Marvel films. (It's been years and I haven't stopped laughing at Vision in the kitchen in Captain America: Civil War.) They share a funny bone with Wes Anderson and the Coens, but their unwillingness to go all the way with Cherry leaves the movie a tad split-brained, and its full potential somewhat unfulfilled.

But Cherry keeps afloat thanks to its leads. Holland and Bravo are note-perfect as avatars of lost innocence. Their porcelain babyfaces make them resemble children playing a demented game of house. Behold Bravo, an ex-Nickelodeon star with a white ribbon on her neck, saying "Fuck me" into the camera as Holland furiously masturbates in an Army portapotty. The two show range and depth beyond their years as they embody the deteriorating corruption of youth that war and addictions inflict. Cherry may be set in a post-9/11 America and written by an elder millennial (Walker is 35-years-old), but the movie is unmistakably for Gen Z who are still forced to live with the consequences of the financial collapse and America's ceaseless presence in the Middle East.

The malaise in Cherry's setting is the ultimate, ahem, cherry on top of the Russos' cinematic sundae. There’s nothing flattering or nostalgic about the Russos’ depiction of Cleveland, the film’s setting and indeed the filmmakers’ own hometown. The city is as industrial midwestern as can be, with even the gold-orange glow of the sun incapable of warming the harsh gray streets Cherry walks. No matter the day or season, it is always cold in Cleveland.

In the 2013 BuzzFeed profile that led to Walker's book deal, he recollected that bank robberies were the only thing stimulating him after living through a war zone. "It was high-stress and scary, but he was used to that," BuzzFeed wrote. Walker himself said, "Was it a good outlet for my anger? Yeah, it was great." While this point isn't emphasized in the Russos' film (Cherry's goal is to get high, and not from robberies) it’s still clear how much of a lost soul Cherry becomes before an inkling of hope reveals itself.

In 2018, Vulture hailed Cherry the novel as "first great novel of the opioid epidemic." In 2021, Cherry the film stands out as the first great movie of the opioid crisis, or damn near close. It's a powerful demonstration from the Russos as filmmakers, trading on their many years spent in Marvel Studios' superhuman trenches for something darker, deeper, and even more human.

Cherry will be released on Apple TV+ on March 12.