"You feel like an old fart. I remember thinking, That’s how I’m gonna learn." 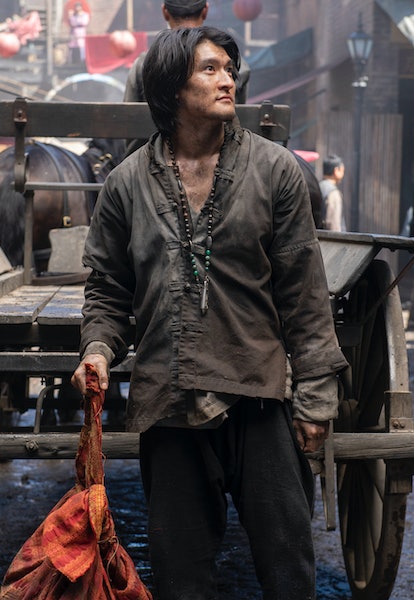 Chen Tang approached his role of “Hong” on the Cinemax television series Warrior like a puppy.

“I had this image of Hong as a stray golden retriever,” Tang says. “He’s gentle and kind, but he’s had to be vicious to survive. In The Dark Knight Rises, when Bane is like, ‘You merely adopted the dark,’ that’s Hong. He’s just a happy chicken.”

The 32-year-old actor, born in Japan and grew up in China and Tennessee, appears in Season 2 of Warrior, now streaming on HBO Max. Tang stars as the new (and queer) recruit to the Hop Wei, one of the feared Chinese immigrant gangs of 1870’s San Francisco. Joining our heroes Ah Sahm (Andrew Koji) and Young Jun (Jason Tobin), Hong is the new muscle whose surfer-like chillness masks a bloodthirsty killer.

With both seasons of the show now on HBO Max, there is hope the cult series created by Bruce Lee will find an audience for Season 3 renewal. “The producers planned the show for four to five seasons,” Tang says. “We still have so much story to tell. Though we aren’t in production, it doesn’t mean it can’t happen. I genuinely believe that Warrior will fight on another day.”

Inverse spoke with Tang about his teenage years in Memphis, Tennessee playing football and the original Warcraft on PC, and speculating the world of 2030.

WHAT KIND OF KID WERE YOU?

I was a nerd, but I was a floater. In American high school, there’s always cliques, but I got along with everybody. I did well in school — it wasn’t difficult for me. I hope that doesn’t sound arrogant. I played like three sports in high school, and kung fu as well.

I played American football for the longest, believe it or not. Skinny Chen Tang played football! I started as a tight end. Defense was my jam. And then I did outside linebacker and strong safety.

The Deep South is football country, but there’s a huge Asian population in Memphis, believe it or not. In my high school there weren’t that many, but in the city, there’s quite a bit. And we all rolled tight! We were like the Asian mafia in a way.

WHAT WAS YOUR FAVORITE BAND?

That’s such a loaded question, because Memphis is Music City. I grew up listening to a ton of country music, tons of hip-hop, blues, R&B, motown, soul jazz. Plus, I grew up in the very wonderful early 2000s, when hip-hop was the best for me. Back when Nelly was around, and young, everyone did the Band-Aid thing.

WHAT KIND OF CLOTHING DID YOU WEAR?

Tommy Hilfiger overly-colored polos. I had yellow polos, and yellow shoes as well. Yeah. I blocked all of that out until this interview. You pried it all open.

WHAT WAS YOUR FIRST MEMORY OF THE INTERNET?

Online gaming. Our family had a Mac before it was cool. The first game I ever played was the original Warcraft. I played that game so much. Blizzard sort of raised me, you know?

As a kid, my first impression of the game was, “What the eff is this?” Because you’re looking straight down. I’m like, “So I can make a box? I can click this guy, and this guy goes there?” It was awesome.

WHAT’S A TRUTH ABOUT LOVE YOU BELIEVED WHEN YOU WERE 15?

I was convinced it was like the love songs. I believed if I just did everything the love songs told me to do, like, I could have love. Like Brian McKnight. [starts humming “The One”]

Oh, do you remember Avril Lavigne? “sk8er boi”? I was like, “I’m not a skater, but maybe this will happen to me.” We didn’t have a ton of high school drama, but everyone’s like, “My kids love you in Mulan!” My 15-year-old self knew the truth. It’s all true. All the love songs were true.

WHAT HIGH SCHOOL TEACHER DID YOU LIKE THE MOST AND WHY?

We had a geography teacher we eventually found out was an Army Ranger flying helicopters in Vietnam. I remember being like, no wonder you taught geography. You’ve been all over. That was my first cool teacher. You can be yourself and still be cool.

WHAT DO YOU CONSIDER YOUR FIRST PROFESSIONAL BIG BREAK?

The first time I considered myself a professional actor was when I was 20. Long story short, I didn’t know I wanted to be an actor. We didn't get to access a lot of movies, China was a very different place in the ‘90s. When we immigrated here, we didn’t have the habit of watching movies and television. But the first movie I ever saw was Jurassic Park. I was almost 10 and I remember thinking, Wow, to be a part of that. If I was in that movie, would I be terrified on set?

[Years later] I majored in business at the University of Miami but discovered acting. I transferred to Emerson College in Boston. As a transfer student, you feel guilty. You feel like an old fart. I remember thinking, I need to do professional auditions. That’s how I’m gonna learn.

I auditioned for a play that ended up being the first Asian-American cast in Boston, an original piece called After the Quake. I ended up getting the lead, and it was the first time I got paid to be an actor. It was $500 for eight weeks of rehearsals plus the run of five shows a week. I got my first reviews. On opening night I turned 21, and I just remember thinking, “Wow, this is what it feels to be a professional.”

WHAT DO YOU CONSIDER YOUR FIRST PROFESSIONAL FAILURE?

HOW DO YOU THINK THE WORLD WILL BE DIFFERENT IN 2030?

Everything’s going to be automated. Self-driving cars will be a norm. I think Bitcoin will be cemented. In my country, China, we have been cashless for years.

I think there will be some great power conflict. I hate to say that, because hopefully we find a way to avoid it. But if you look at history, when there are two or three great powers in the world, there’s always conflict. I hope the world is able to get closer because of our interconnectivity.

WHAT WOULD YOUR 15-YEAR-OLD SELF SAY ABOUT YOUR LATEST PROJECT?

“What the fuck? I can’t believe you’re using these martial arts you learned.” I can’t sit here with a straight face and be like, “I’m a martial artist,” but I have a background. I did Northern and Southern Fist for seven years, I can move and pick it up quickly, but I can’t say I’m an expert with authority. But the background and being able to flow helped me immensely with finding how my character [Hong] moved. It helped me with picking up choreography quickly.