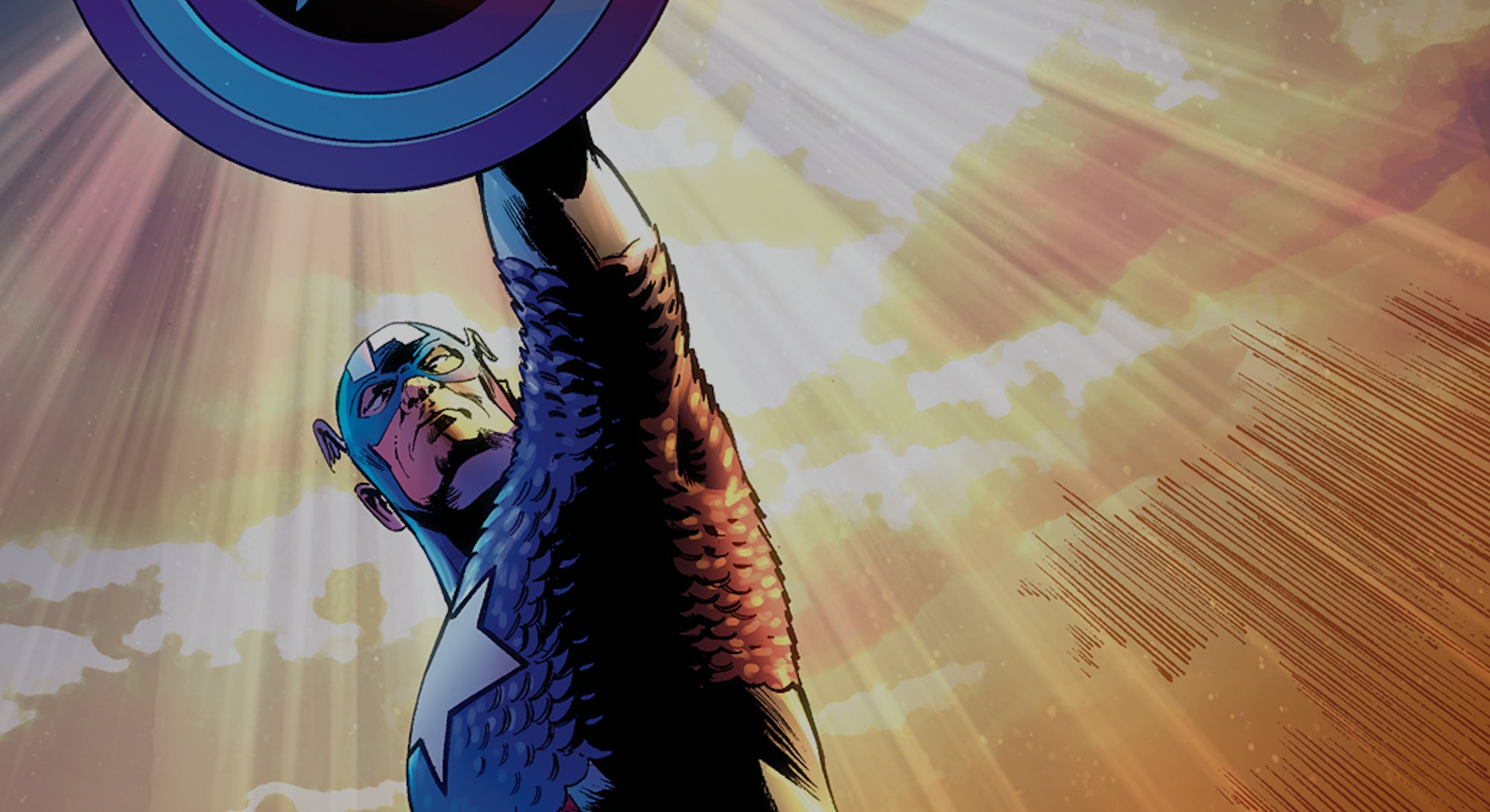 He was the sentinel of liberty, justice, and truth. And then… he was gone.

The death of Captain America in the aftermath of a Civil War that left the superhero community divided shook the Marvel Universe in 2007. But it was only temporary, and, like all good things, Cap came back — even when Steven Rogers didn’t.

Bucky Barnes became the new Captain America. He carried the shield mantle admirably, leading the Avengers through a Skrull secret invasion and teaming with Steve Rogers’ old allies to combat the domestic terrorism of the Red Skull’s daughter, Sin. But that too was just temporary.

As it turned out, Steve Rogers wasn’t dead, merely stuck in time — a situation not dissimilar to his predicament at the end of WWII that left him frozen in a block of ice for decades. And like Arthurian legend, the once and future king was returned and reborn in the conclusion to a six-year epic that marks the greatest Captain America story ever told.

The six-issue Captain America: Reborn by Ed Brubaker and artist Bryan Hitch, published from 2009 to 2010, is different from most Marvel events in that it is inextricably linked to Brubaker’s ongoing run on Captain America at the time. As a result, it’s less effective as a standalone than most major comic book events.

That’s not to say you can’t just read Reborn, but it really doesn’t have the same impact it would if you were to start at the beginning with The Winter Soldier and go all the way through to Captain America #601.

In the lead-up to Reborn, Bucky Barnes has adjusted to his new role as Captain America and his partnership with Falcon and Black Widow. Meanwhile, Steve’s flame, Sharon Carter, has been on the hunt for the truth about who killed Captain America. As it turns out, Sharon herself pulled the trigger, a result of being brainwashed by Dr. Faustus in a plot conceived by the Red Skull.

But the gun didn’t kill Cap, it simply trapped him in time. Specifically, he’s being held in one spot until the rest of Red Skull’s plans were attenable. In a cruel bit of irony, Sharon, believing she could bring Steve back, destroyed the Red Skull’s machine, which instead sends Steve spiraling through the timeline of his own life.

The world in which this plays out is one in which Norman Osborn has become Earth’s greatest hero after stopping the Skrull invasion by killing the Skrull Queen Veranke. As a result, he’s been given access to the world’s security forces. Norman renamed S.H.I.E.L.D. as H.A.M.M.E.R. and sets up his own team of Dark Avengers consisting of Ares, Venom (Mac Gargan), Hawkeye (Bullseye), Daken, Ms. Marvel (Moonstone), and Noh-Var.

In other words, the world needs Steve Rogers more than ever.

What Happens in Captain America: Reborn?

Steve Rogers is trapped in the events of his past, moving through time at various points in his life. He’s back on Omaha Beach. He’s watching his mother die. He’s fighting alongside the Invaders. He’s watching Bucky die. He’s re-experiencing being given the super-soldier serum.

In many ways, Reborn becomes Brubaker and Hitch’s opportunity to retell the origin of Captain America, while also setting up his future.

While Original Cap is reliving the past, Bucky Cap is battling Osborn’s Dark Avengers alongside Falcon and Black Widow until the trio is captured by H.A.M.M.E.R. Ant-Man manages to rescue them, but not before Osborn can free Sin and her lover Crossbones. Sin then reunites with her father, the Red Skull, in Latveria. Red Skull is trapped in Arnim Zola’s robot body, but they have a plan to put him into a new body. (Any guesses whose?)

Steve encounters Vision in the past and gives him information that he’s told to forget until the time comes. While the Avengers and Mr. Fantastic seek to uncover what Osborn and Sin are up to, Vision’s memory of his meeting with Steve is triggered and he reveals to the team that Steve is caught in the past.

But it’s too late. Sin and Red Skull have already captured Sharon and connected her to a machine, which through chronal tracers put into her body, will draw Steve through time and back to her. (The science is iffy, but hey, comics!)

The Red Skull also attaches himself to the machine so that when Cap is brought back, the Red Skull’s consciousness will be uploaded into Steve’s body. This is the end result of Osborn’s plan to secretly have the Red Skull lead the Avengers and grant him further power.

Vision tries to stop the procedure, but it’s too late and the Red Skull takes over Steve’s body. Steve is trapped within a nightmare world in his own mind, a world in which New York is controlled by the Red Skull and his army of Nazi soldiers.

Bucky Cap arrives and battles the Red Skull in Steve’s body (Red Steve) while the Avengers fight an army of MODOK soldiers. At the same time, Rogers battles Nazis in his mindscape in an attempt to break the Red Skull’s control.

Just as Red Steve is about to kill Bucky Cap, Steve strangles the Red Skull in his mind, forcing him to flee back to his Zola robot body, which he then enlarges with the help of Pym Particles.

But before the giant-sized Red Skull can wreak havoc, Vision takes control of the Red Skull’s ship and fires on the giant robot, destroying it and seemingly the Red Skull’s consciousness. The explosion from the blast also damages Sin’s face, burning her flesh off.

In the end, Steve and Sharon are reunited, Bucky and Steve are both Captain America, and Sin is left to become the new Red Skull.

Brubaker would continue writing Captain America for another two years, but Reborn marked a climax for the series. It cemented Bucky as a rightful Captain America, gave Steve Rogers a new role as an espionage agent and leader of the Secret Avengers, and elevated Sin to a new level of antagonism.

While most of what Reborn tackles and sets up likely won’t make its way into the Marvel Cinematic Universe any time soon, we will hopefully see elements. Rumor has it Sin will join the MCU in Captain America 4 to duke it out with Sam Wilson’s Cap. But this time, it probably won’t end with a giant robot Red Skull and a Nazi-controlled New York City.

Then again, who knows what Marvel has planned.