“She was about sixteen last time you saw her.” 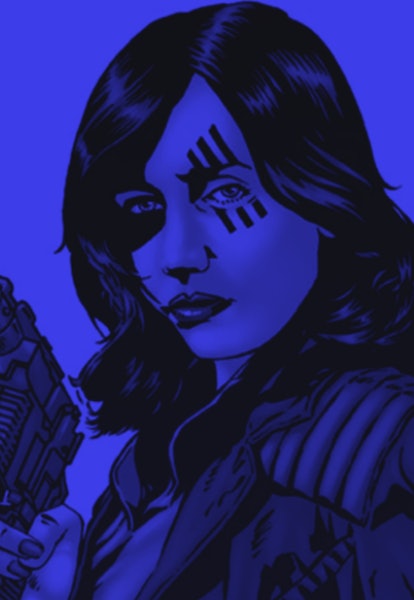 Between Anakin being "born of the Force," Luke being hidden on a moisture farm or Rey being the secret daughter/granddaughter of Palpatine through cloning nonsense, you can't really be a Star Wars protagonist unless the circumstances of your birth were at least a little sketchy. Now that the Star Wars universe is branching out more into TV series, the trope seems more difficult to come by. Fortunately, The Book of Boba Fett may revive this trademark for a new era and a new medium.

Deep in the depths of the Star Wars non-canon Legends tales is the story of Ailyn Vel, the daughter of a single mother who hated her father for walking out on them and decided to dedicate her life to hunting him down and killing him, becoming a top-tier bounty hunter along the way. Sounds like a great Star Wars story, right? What makes it better is that her father is none other than Boba Fett.

Apparently, between the events of the prequel and original trilogies, Boba Fett attempted to have a normal life. He settled down on Concord Dawn, married Sintas Vel, another bounty hunter, and together they had young Ailyn. Boba didn't actually leave his family, he was exiled for murdering an officer who assaulted his wife. But still, Ailyn harbored contempt that would span 50 years.

The hard part about tracking down Boba Fett is that he has the exact same face as countless other clones. Eventually, Ailyn was able to track down a clone in Mandalorian armor. She killed him, but it wasn't her father. She then adopted the armor as her own, posing as her father and using his reputation to get jobs.

Unfortunately, Ailyn never found her father. While he was looking for her decades after he left Concord Dawn, she was held prisoner and held by Kylo-Ren-alike Jacen Solo, leaving only a daughter, Mirta, to bond with her grandfather.

It's quite the tale, but it doesn't necessarily mesh with the new canon, at least not at first glance. Boba Fett could very well have a secret daughter, as that window of his past is completely unaccounted for. However, in order for her story to reach our screens, she would actually have to be successful in her hunt for her father.

The Book of Boba Fett takes place around 10 ABY (After the Battle of Yavin.) Ailyn was born around 15 BBY, meaning she would be about 25. The perfect age for a clash of bounty hunters in the new series, followed by a family reunion and possibly a new main cast member.

A new family member is exactly what Boba Fett needs at this point. After years of solitude living on Tattooine, perhaps a meeting with his estranged daughter will remind him of his humanity and the life he had when he took off that iconic helmet. Then, once he's done with his armor, he can pass it down, like his father passed it down to him.

Ailyn Vel is the daughter of two bounty hunters. Her journeys are prime spinoff material, and it all starts with The Book of Boba Fett.

The Book of Boba Fett premieres December 2021 on Disney+.