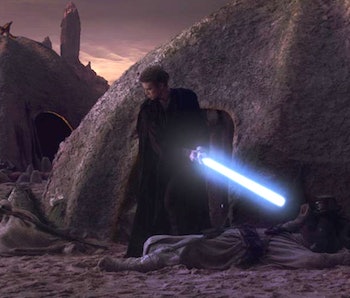 Boba Fett protects the Tusken Raider men. But not just the men. He protects the women and the children too. In the second episode of The Book of Boba Fett we learn just how different Fett’s feelings about Tusken Raiders are from Anakin Skywalker’s. However, there’s a big wrinkle here, as this episode reveals that certain tribes of Tusken Raiders are more murdery than others. Here’s how this change in Tusken canon casts Anakin’s actions in Attack of the Clones in a different light.

Not All Tusken Raider Tribes Are the Same

While The Mandalorian made it clear that it was possible for outsiders to communicate and even barter with Tusken Raiders, The Book of Boba Fett has taken that idea further. Since escaping the Sarlacc Fett has, as C-3PO might have put it, become “part of the tribe.”

This wasn’t exactly what Fett wanted, but so far he’s tackling his new role as honorary Tusken Raider pretty well. And in “The Tribes of Tatooine” we learn that the specific tribe he’s part of seems to be one of the more thoughtful groups of Tuskens. In a scene toward the final third of the episode, Boba Fett’s adoptive Tusken protectors tell him this:

“There are many different Tusken tribes... since the oceans dried, we have stayed hidden.”

This brief exposition gives us quite a bit of new information. For one thing, this explains why these Tusken Raiders dress differently than the ones we’ve seen in A New Hope, Attack of the Clones, and The Mandalorian; because they’re a different tribe, one that doesn’t rely on brutality.

Second, it suggests that Tusken Raiders are indigenous to Tatooine, and their various lineages stretch back to a time when Tatooine was a planet with oceans. This must have been eons in the past, but this detail gestures at a Star Wars prehistory which is somewhat rare. In Rebels, we’ve seen small, naturally occurring bodies of water on Tatooine, and in the Visions episode “T0-B1,” the idea that Tatooine could be terraformed back into a planet with oceans is briefly touched on.

But before now the canon has never explored the idea that Tatooine was once anything but a desert planet. So why did Tatooine turn into a desert all those years ago? Climate change? A superweapon? We don't know, but The Book of Boba Fett makes it clear that Tusken culture remembers a time when things were different.

Although the idea that there are different tribes of Tusken Raiders has been floating around for a while now, that some of the tribes are explicitly more prone to kidnapping and murder is notable.

Essentially, we’re led to believe that the tribe Boba Fett finds himself in has almost nothing in common with the tribe who kidnapped Anakin’s mother in Attack of the Clones. These Tuskens prefer to stay “hidden,” and even though they captured Boba Fett, it feels hard to imagine them going after a middle-aged woman like Shmi Skywalker for no reason. In Attack of the Clones, Anakin’s step-dad Cliegg Lars, says “Those Tuskens walk like men, but they’re vicious mindless monsters.”

Now, Anakin going nuts and slaughtering all the Tusken Raiders in Attack of the Clones is very bad. It’s his first big step toward the Dark Side, and why Padme decided to keep dating him after that is still confusing. But that tribe of Tuskens behaved in a way this tribe wouldn’t dare. Cliegg Lars makes it sound like the Tuskens that took Shmi were looking for people to kidnap. In The Book of Boba Fett, these Tuskens only took Fett because they found him.

Boba Fett has found a way to commune with the Tusken Raiders. Had Fett encountered a different tribe of Tuskens, this series would be going very differently. Fett may have the moral high ground on Anakin right now, but that’s probably just because he got lucky.

The Book of Boba Fett is airing new episodes on Wednesdays on Disney+.