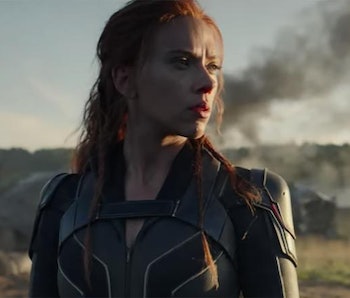 Black Widow is the first MCU film set entirely outside the standard chronology, and it'll be adding even more timeline jumps. Taking place between the events of Captain America: Civil War and Avengers: Infinity War, Natasha Romanoff heads back to Russia to take care of some unfinished business. Fresh from the Academy Awards, new spoilers from the next MCU movie reveal Black Widow will go even further back in time than we thought.

The Super Bowl TV spot teased that Black Widow might be drawing inspiration from Mark Waid’s Black Widow Volume 6 comic series, which explores Natasha's adolescence and training with the Black Widow assassins program. On the Oscars red carpet, Variety spoke with Black Widow hair and makeup artists David White and Paul Gooch, who seemed to corroborate this rumor when they revealed the film will include younger versions of the characters.

“We’re going back in time to when they were much younger, and we have actors playing even younger than they are,” Gooch said.

It seems likely the film will include a flashback to Natasha's time in the Red Room. We know she returns to Russia to confront her past and reunite with her “family,” including Yelena Belova, Red Guardian, and Melina Vostokoff. These latest comments hint the movie will explore more of Black Widow’s formative years and showcase her training in the Red Room, a covert program that brainwashed young women and turned them into deadly assassins.

Gooch referenced more than one actor having a younger counterpart, so it's possible that Yelena and Melina will appear alongside Natasha during these flashback scenes at the Red Room. It would at least offer a clearer backstory to how they all came to be a "family." While it’s unclear where in the film these flashback scenes will appear, it's possible they'll also introduce Anya, Natasha’s Red Room rival. Anya later becomes the villain known as Recluse, who vows to take down Natasha at any cost.

In the comics, Recluse was the daughter of the Red Room’s headmistress during the time Natasha trained at the academy. Recluse was the only girl at the Red Room who wasn’t trained to become an assassin. Knowing her mother preferred Natasha, Recluse became bitter and jealous and spent the rest of her years training to become Black Widow’s fighting equal. Later, she founded the Dark Room to train even more child assassins and sought revenge on Natasha for attempting to thwart her plans.

The fact that Black Widow will include scenes of young Natasha isn’t necessarily confirmation of Anya’s inclusion. However, if Recluse is one of the film’s big bads, then it’s possible the flashbacks will set up her early relationship with Natasha, reveal the Red Room’s inner workings, and more. After all, if Black Widow is back to confront her past, it’s always best to start from the very beginning.