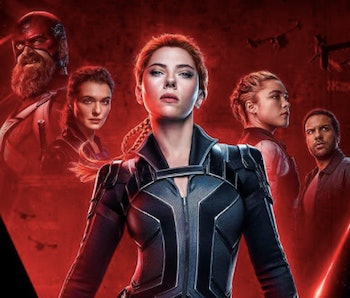 Natasha Romanoff will be getting some much-needed love in Black Widow. The character’s highly anticipated solo film has been pushed back a full year due to the ongoing pandemic. While Marvel Studios kept plot details tightly under wraps in the months ahead of its original May 2020 premiere, the release of Black Widow: The Official Movie Special Book offers up loads of new information about the characters and storyline, including an unexpected romance.

Spoilers ahead for Black Widow.

Set in the aftermath of Captain America: Civil War, Black Widow will see the superhero return to face the broken life she left behind. She will also come face-to-face with Taskmaster, the dangerous and mimicking villain who has taken control of the Red Room where Natasha previously trained.

One character who remains shrouded in mystery is Rick Mason, a S.H.I.E.L.D. agent and ally to Black Widow. In the official book (via The Direct), O.T. Fagbenle revealed Mason’s relationship with Black Widow will have a romantic component.

“Mason is a finder for people who aren't so affiliated with armies, like people who are part of the underworld. He can find anything you need as well. He's had a relationship doing that work for the Black Widow, and they have a bit of a vibe going on. There's a sense that there's more to their relationship than it being purely work-related, so that's always in the mix… Mason's story starts when Natasha is trying to escape, and she needs a place to hide out. So we hang out for a little bit. And then later on, when she gets in trouble, she calls me up again.”

So, it seems fans can expect things to heat up between the pair and for some smooching (or more) to occur. Ooh la la! After all, he sounds like a genuine and reliable guy and Natasha might need someone to lean on after losing the Hulk at the end of Avengers: Age of Ultron (the pair shared a connection prior to his leaving Earth). It’s unclear whether the pair will rekindle a previous romance or light the flames for a new one, but it’s about time for Natasha to get some lovin’ between all the ass-kicking.

In the comics, Black Widow dated Hawkeye, the Winter Soldier, Daredevil, and even Iron Man himself. As for Natasha’s comic book relationship with Mason, it’s basically non-existent and their relationship status likely changed for the film. In fact, Mason is a fairly minor character in the comics and his introduction in Black Widow puts their potential romance into uncharted territory.

Fans have speculated that Mason is actually Taskmaster, but that doesn't seem too plausible. It’s likely that he was once a stalwart S.H.I.E.L.D. agent who went rogue in the years since he last saw Black Widow and is now merely working as a mercenary for Taskmaster.

Who knows? Maybe Mason is a part of the famous Budapest operation that Black Widow and Hawkeye tackled together, the details of which will finally be revealed in the film. Conversely, he could really be a decent guy and we’re just overthinking his romance with Black Widow because of the Marvel Cinematic Universe’s shoddy track record regarding her love life. Either way, Mason’s relationship with Black Widow may just be the pick-me-up she needs before taking on Taskmaster once and for all.